On the evening of 8th November 2009 witness Pete Fitter, and his wife and son saw some unexplained lights in the skies over Rhos On Sea, Colwyn Bay, North Wales. It was 7.15pm when they spotted the lights to the North of their position. There were three orange glowing lights in a triangular shape. It was a partially cloudy evening with gaps of clear sky with stars visible. The lights were at quite high altitude, and appeared bigger than the surrounding stars. The lights were moving towards the West at a slow speed. The only sound they could hear was that of another conventional aircraft also in the vicinity. They could make out the flashing lights of this plane. Pete checked the objects through his binoculars and was surprised that they did not seem to change size when he looked at them through these. 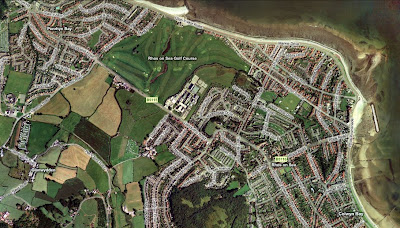 The witnesses continued to watch the lights. They then began moving at a faster speed, and after watching them for about 30 seconds they suddenly vanished without trace.

Currently BUFOG has no further details on this sighting as Pete did not leave us his contact details, but if he gets back in touch this report may well be updated. From what he has already revealed, there is the possibility that the lights may well have been three Chinese lanterns drifting in a triangular pattern. However there is also the possibility that they were something else entirely, either three objects or all part of one large object. Pete does not believe they were lanterns as he feels that this would have been obvious when he looked at them through his binoculars. But they may have been too far away to see clearly even under magnification. It is unknown how fast the lights appeared to accelerate, whether they retained their position to each other and whether they all vanished at exactly the same moment. All of these factors would help either prove or disprove the lanterns theory. Without this information we can only speculate at this point as to what the witnesses saw.