Occasionally at BUFOG we receive details of a sighting which fit in with many other previously reported incidents. Over the last couple of decades there have been many sightings of black triangular shaped craft with glowing lights on their underside, from many countries around the world. These craft are sometimes extremely large in size and have been seen to perform incredible manoeuvres and move at tremendous speed, as well as hover silently.

There have even been sightings of these craft emerging from or entering the sea and moving around underwater. Some people theorise that they are some kind of secret military craft which has not yet been publically revealed. However many others, including myself, believe them to be of extraterrestrial origin as they appear to display very advanced characteristics far ahead of our current known technology. It also seems unlikely that if they were of military origin they would continue to be flown in plain sight of the public. On the evening of Sunday 8th November 2009, witness Ian was lucky enough to see something which may well have been one of these craft.

It was 7.30pm and Ian was driving back home to Stourbridge with his two sons, after visiting his parents in Birmingham. He left the M5 motorway at Junction 4 and was driving along Sandy Lane (the A491), close to the village of Belbroughton. It was a cold and damp evening, and there had been a light drizzle which had now ceased. Due to the time of year the light had long since faded in the sky. There was partial cloud cover but Ian could make out faint stars in the distance.

As he approached a mini roundabout which leads onto Stourbridge Road, he checked to the right for traffic, looking to the North North East. As he did so he noticed what appeared to be three bright white stationary lights in the sky. The lights appeared to be at quite low altitude, Ian estimates about 150-200 feet high. He believes they were about 200 yards from his position out over the fields which run alongside the road.

Map showing location of witness and estimated position of object: 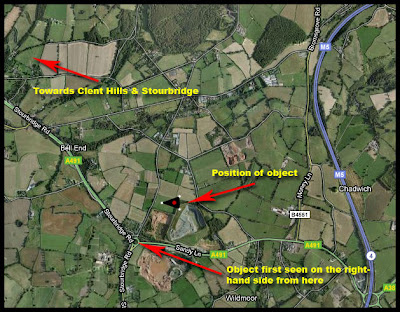 He continued to drive around the roundabout onto Stourbridge Road. He then looked back at the lights. He could now see that the lights appeared to be at the corners of one large triangular-shaped object. He estimates it was at least the size of a Boeing 747. The object was no longer stationary and appeared to be banking towards him. As it did so he saw a pulsing deep red coloured light at its centre, equally spaced between the three white lights. Ian says this central light looked unsual, it appeared larger than the other lights and was permanently illuminated but constantly pulsing in brightness. 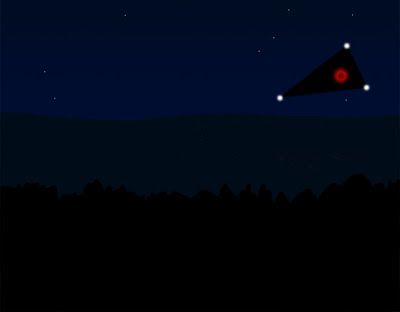 Ian immediately assumed that the object was a flying craft of some kind, either an unusual/secret military craft or a cleverly made hoax. He was very interested in the object but continued to drive because of the time of night and the fact he had the two kids in the car, one of whom was only one and was asleep. He did not point out the object to his other son. He stared at the object for only a few seconds before continuing on his way home. Looking back, Ian wishes he had stopped and also could have tried taking a photograph on his mobile phone, but at the time this did not cross his mind.

This is a very interesting incident and may well be a sighting of a Flying Triangle craft. Although it was dark, Ian could still make out a solid structure between the four lights so it was clearly one object rather than a number of separate objects. As it banked they all remained in the same position to one another, again indicating they were lights attached to one object. The light configuration – the white corner lights and larger red light at the centre – is common in Flying Triangle sightings. If the lights really were on the underside of the object, as they appeared to be, then due to Ian’s viewpoint the object must have tilted to a vertical/near vertical angle. This is again something I have heard described before.

Red and white are of course the colours of commercial aircraft lights, however Ian is certain that this was not a normal aircraft of any kind. It appeared to be very low in the sky and also stationary but changing its angle, something which a normal aircraft would not be able to do. Obviously with conventional aircraft, the red light remains constantly bright, and there are two white strobing lights, one at each wingtip, which is quite different to what Ian witnessed, so both myself and him believe this can be ruled out as an explanation.

The sighting occurred only a couple of days after bonfire night, but it seems very unlikely that what was seen could have just been a number of fireworks or flares, and this would not account for the dark triangular body of the object which could be made out. There were also no sounds coming from the object at all, and if there were fireworks being launched they would more than likely have been spotted by Ian before he reached the roundabout.

The object appeared too large to be a balloon or inflatable of some kind, and besides this, why would a balloon/inflatable have white and red lights on its underside? If it was a prank it seems odd that it would be flown out over fields after dark on a cold wet evening, surely it would have been somewhere with a higher chance of someone spotting it? And again the size of the object seems too big for a model to be the explanation. Other explanations such as earth lights or meteorites do not fit in with what was experienced.

There is the possibility that it was an undisclosed military craft of some kind, but if so it seems a very unusual place to be flying it, and there are no military bases anywhere in the area. After looking into the witness testimony and considering the various possibilities, I believe that there is certainly a chance that this was a genuine sighting of a Flying Triangle craft, and therefore possibly of extraterrestrial/extradimensional origin. Ian wonders if anyone else may have also seen it. If we receive any further reports from other witnesses this report will be updated.