With many UFO sightings the witnesses will get a clear view of the shape of the object they are observing, and will be able to refer to this when describing it later on. However sometimes in sightings which occur after dark, the main body of the object will not be discernible, only the lighting configuration on it. I know this all too well after my own sighting down in Warminster in the summer of 2009. This report covers a sighting of this type. Although the actual shape of the object could not be accurately determined, the incident has a number of very interesting aspects to it.

Early on the evening of Friday 18th October I met with the witness Ian at the sighting location to discuss what took place. My photographs of the location can be seen below.

It was the evening of 8th October 2013. The time was approximately 7.20pm. Due to the time of year it was already dark. There was quite a bit of cloud cover, with not many stars visible, but it was a dry and still evening. Ian was driving through the area of Tile Hill in South West Coventry. He was travelling along Herald Way and approaching Sainsbury's on his left. There was lots of other traffic around.

Before reaching the entrance to the store’s car park he came to a roundabout. As he began to drive around the island he glanced to his left to the South along Renown Avenue. There in the sky, less than a mile from his position was an object with numerous coloured lights. There was a white light at what he assumed was the front, an orange flashing light on each side, and a red light at the rear. It appeared to be about the size of a helicopter, which is what he initially assumed it must be, although the exact shape of the object could not be determined, all he could see was that the lights on it were arranged in a diamond shaped configuration. 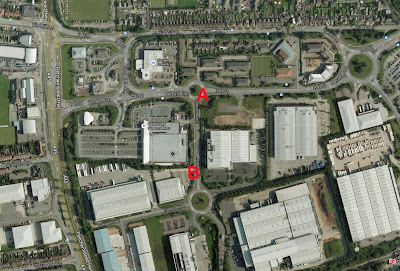 Photograph of the initial sighting location in the direction the UFO was observed: 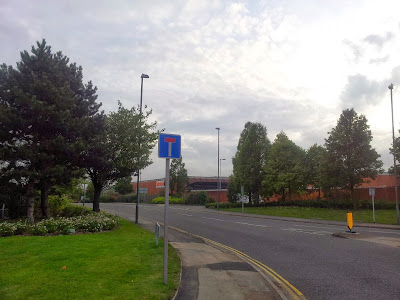 The object appeared to be near stationary in the sky. It was quite low down, possibly around 80 feet off the ground. Ian had only looked at the object for a couple of seconds when suddenly it made an abrupt and very fast movement to the West and was lost from sight behind some nearby trees! At this moment Ian realised it could not be a helicopter as its acceleration had been far too sudden and extreme.

He continued to drive along Herald Way alongside the edge of Sainsbury's trying to spot the object in the sky again. As he arrived alongside a footpath which leads into the corner of the car park he once again spotted the object in the sky to the South West of his position. However he was now amazed to see that the object looked almost 4 times as big as it had done previously! It was still not possible to see the shape of the object but the distance between the white light and the red light seemed to be at least 80 feet, and the distance between the two orange flashing lights appeared to be around 30 feet. This was extremely puzzling, as it had not looked like it had flown towards his location, when he initially saw the object move it had appeared to move on a straight and level path. It was almost as if it had physically grown in size, although there is no way that this can be verified of course.

There was now some additional lighting visible on the object. On the underside of the object closer to the red light at the rear was a line of three white coloured lozenge-shaped lights. Ian assumes these had not been visible before due to the angle he was viewing the object at.

Photograph from Herald Way in the direction the UFO was spotted again: 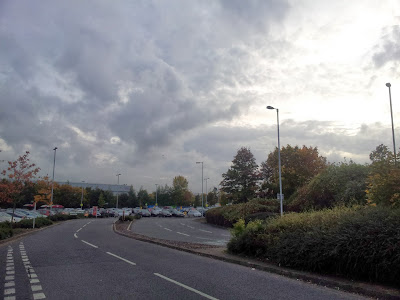 The UFO was still moving to the West, but nothing like as fast as it had done previously. Ian glanced around at the other cars. He was amazed that nobody else seemed to be looking at the object. They were all seemingly too pre-occupied to notice it, despite its apparently large size. Ian was now entirely focused on the object and didn’t want to let it out of his sight. He drove along until he reached the Coventry Road. Here he was forced to turn right onto it, but was soon able to turn left onto Tile Hill Lane. The object was luckily still visible off to the South West. Ian continued to give chase, travelling along Tile Hill Lane. He continued past various roads trying to get closer to the object, but it seemed to be moving a little faster than he was. At various points along the road he lost sight of it behind buildings.

As he approached Banner Lane on his right he realised the UFO had now changed course and was heading in a North North Easterly direction. By this time it was at least a couple of miles away from him. He turned into Banner Lane and pulled up in a lay by. The object was now once again out of sight. Ian got out of the car and started to look for it in the distance. There were a couple of women nearby. Ian asked them if they had heard or seen anything, but they told him they had been too pre-occupied with talking to each other.

Aerial map showing the route which the witness took: 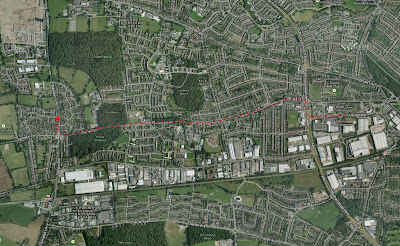 Photograph taken from Banner Lane in the direction the UFO could still be seen: 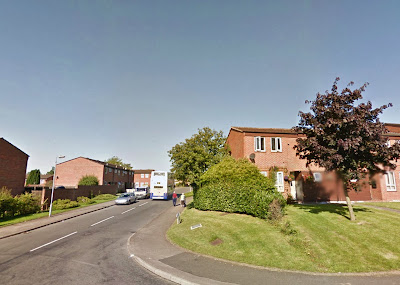 Ian decided to get out his phone and contact a couple of friends to tell them what he had witnessed. While he was on the phone to one of them he managed to sight the UFO again. However by the time he had switched to camera mode and raised it back up the object had sadly vanished from view behind some trees and buildings. Ian feels that the photo would probably not have come out even if he did manage to take it due to the distance of the object by that point and the fact it was after dark. However while he was standing on the street he did spot a couple of planes coming in to land at Birmingham International. He compared these to what he had just witnessed. Both of them appeared to be at a higher altitude to the UFO and he could hear the noise from their engines, where as he had heard no sound coming from the object at any point.

This is a very interesting sighting which occurred in a busy location at a time where many people would have been around. After meeting with the witness I have absolutely no doubt whatsoever that he saw what is described above. He was friendly, open and more than happy to take me through the sighting in very specific detail. As it turned out, Ian himself has an interest in another aspect of the paranormal - big cat sightings! He is one of the admins of the British Big Cat Research organization. Their website is at http://bbcrg.org.uk/

So what could the object have been? Due to the multiple coloured lights at different positions on the object the most obvious possibility to look into would be that it was some kind of aircraft. However the lighting configuration observed does not match any known civilian or military aircraft that I am aware of. And the witness himself has been in the armed forces and is aware of many types of aircraft, and how they appear after dark. He says that he had never seen anything like it before.

Also the movement pattern of the object does not fit in with an aeroplane or helicopter. When the witness first noticed the object it appeared near stationary, so this could potentially rule out an aeroplane to begin with. However he did only see this for a brief moment, maybe not long enough to gauge whether it really was hovering motionless. But the extreme acceleration which the object was then seen to perform does not fit in with it being either an aeroplane or helicopter. It vanished from sight within a couple of seconds. The acceleration from a normal aircraft would have been far more gradual.

A very puzzling aspect of the sighting is the way in which the object appeared to quadruple in size. I find it quite improbable that it physically changed size in the short time that it was out of sight of the witness, although this does of course remain a possibility. Perhaps the object had moved closer to his location as well as moved forwards. The witness seemed quite adamant that it had flown on a straight course parallel to the road he was on, but perhaps this was merely an illusion. Another possibility was that it had flown forwards, but then made a second manoeuvre while out of sight. It is possible for atmospheric conditions to magnify objects at a distance, but only in very specific conditions, and not really to the extent reported by the witness.

Other explanations such as a lit inflatable or radio controlled model can also be ruled out. The manoeuvres the object performed clearly indicated it was under controlled flight, not just a randomly drifting object. And it was much too large to be a model of some kind. I am suitably convinced that the object was a craft of a highly unusual nature. As with most cases we have no way of telling its true origin, but the idea that it was extra-terrestrial is certainly worth considering.