On the evening of Thursday 8th October, Sam Davies, her husband and son were driving home in Willenhall. Sam was in the passenger seat of the car. It was approximately 8.30pm and they were driving along Lucknow Road when she suddenly noticed an orange glowing orb of light in the sky in front of them heading to the East. It looked like it was at a distance and quite large, and also appeared to be moving quite fast across the sky like an aeroplane would. It was moving on a steady and level course. At first Sam thought it was a plane on fire. She looked closely and could see it flickering like flames would, it looked a bit like burning ash was falling from it. She pointed it out to her husband and son.

They pulled over into a lay-by and watched the object for about a minute through the car windows. They then decided to continue their journey, with the object still visible in the night sky. They turned onto Paul Hayes Lane and still puzzled by the light, pulled over again and watched it for 30 seconds. Suddenly the object seemed to vanish without trace. At first they thought it must have gone into a cloud, but then they realised the sky was relatively free of cloud. They did not see the object after this point so continued their drive home.

Map showing stretch of road which sighting occurred on and route witnesses took: 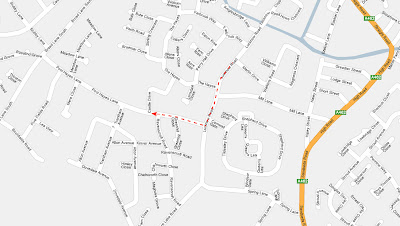 The object seen by Sam and her family has all the characteristics of a Chinese lantern. It’s appearance of a flickering orange orb of light, looking like it was on fire, the fact that it did not perform any unusual manoeuvres but moved steadily on a level course, and the sudden disappearance of the object all lead me to believe it was probably a solitary lantern that had been launched by somebody. These do appear to suddenly vanish when they burn out, and the movement pattern could easily have been the object drifting in the wind. As it was against a night sky with no point of reference, it would have been hard to precisely judge how far away the object was, and therefore what speed it was really moving at. Unless further evidence becomes available to suggest otherwise, this seems the most likely explanation of what was seen.