On the afternoon of 8th February 2011 Leona (name changed for privacy reasons) decided to head out into Saint Helens where she lives to take some photographs. She has a pen pal who lives abroad, and wanted to give her an idea of where she lives. She went out on her mountain bike, and took some photos using her Samsung 3.2 Mega Pixel Fully Automatic camera. The photos included one at Victoria Park which she took at 1.20pm. It was a sunny day, still with patchy cloud.

Soon after taking the photo at the park, Leona noticed a very strange looking man. He was in the bushes and appeared to be looking for something on the ground. He was very tall, about 7 feet in height. He looked quite old and had long grey hair in a pony tail and a pointed grey beard. He was dressed in very unusual clothes – tight fitting white lycra top and leggings, silver high heeled boots, a leather tunic and long green velvety cape. He was also wearing a large silver medallion around his neck and some wrap around sunglasses. He was holding a metallic walking stick. Leona thought to herself “Wow far out!” as she passed him.

Leona returned home and after lunch decided to check the photographs she had taken on her computer. When she got to the photo taken in Victoria Park she was so shocked she almost fell off her chair! Below is the photograph that she was confronted by: 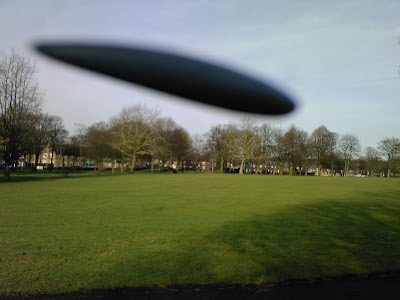 The photo was taken in the middle of Victoria Park facing towards Bishop Road. As you can see there is what appears to be a large black cigar-shaped object in the sky above the park. Leona wondered if the strange man she had seen was somehow connected and could even have been an ET. She phoned her father and sent him the photo. He had a look at it and two hours later got back to her, telling her that it appeared to be a solid object rather than a camera glitch, and that she should send it off for further analysis. 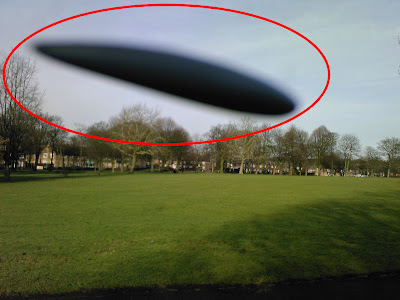 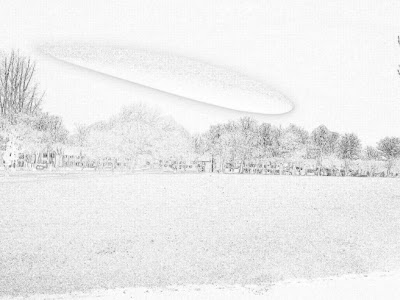 Close up of object:

The photograph is certainly unusual. It appears to be an object of some kind rather than just a camera anomaly as its surface appears curved with light and shadow. However it is not casting any shadow on the ground - it is very unlikely that the object would have appeared on digital camera but not been seen with the naked eye or cast a shadow. Sometimes UFOs can be invisible and show up on infra red, but you would expect any solid object picked up by a digital camera to be visible when not looking through the camera as well.

It is interesting to note that the base of the object narrowly misses the tops of the tree line right across the photo. This is more than likely just a coincidence, rather than being proof that the object is above the trees and avoiding them on purpose.

The blurred edges suggest that it is a small object falling past the camera lens at the time of taking the photo, perhaps a black seed pod of some kind. It is out of focus because the camera is focusing on the park. I feel this is the most probable explanation for the photograph. The unusual man seen nearby was probably just eccentric rather than being an extraterrestrial visitor. If anyone can shed more light on this individual (or indeed if you actually are him) please get in touch.