For the last couple of decades one of the more widely reported UFO types has been the Flying Triangle. On 13th December 2011 witness Gary Nock got in touch with BUFOG to report the sighting of one such object, which had been seen by him and his family on the evening of 7th December. Gary had also reported the sighting to the Express and Star newspaper in order to establish whether anyone else had also seen it. On 14th December I drove out to the sighting location to discuss the incident with Gary face-to-face, and also get some location photographs. This report contains both a detailed overview of what took place, and the newspaper article.

It was 6.40pm on the 7th December 2011. Gary Nock, his wife, his daughter and her boyfriend Jamie were on their way out to the Badgers Sett pub in Hagley for a meal. It was a very clear and still evening, and due to the time of year it was dark and the stars were already out.

Photograph of the Badger’s Sett pub: 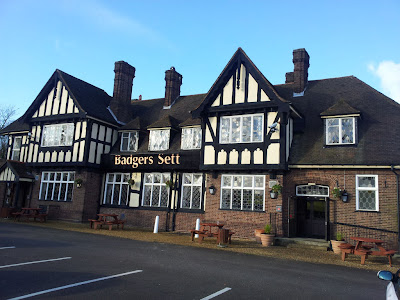 The pub is situated on Hagley Causeway. Opposite the pub is the Clent Hills which are made up of grass covered-fields and areas of woodland. As the family approached the pub, Gary noticed some lights out of the front window of the car. The lights were off to the right of the road to the East. They were white in colour and arranged in a line. They were low down, just over the tops of trees at the western end of Hagley Wood. They appeared to be heading in the direction of them and the pub. It was clear that they were attached to a single object, but as it was getting dark it was hard to make this out at first. He pointed the lights out to everyone else in the car.

Witness drawing of how the UFO appeared initially: 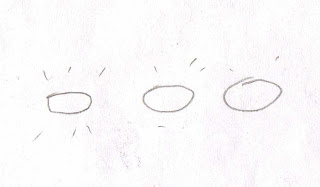 Photograph of the sighting location in the direction the object was first seen: 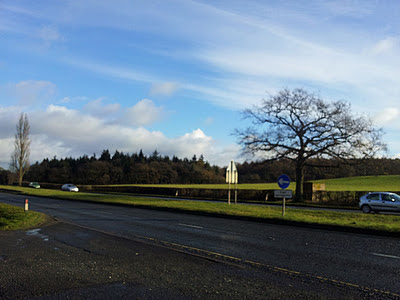 Gary turned into the pub car park and parked. He was intrigued by the white lights and so quickly got out. He asked Jamie to come and take a look. Leaving his wife and daughter at the car, the men walked back to the path that separated the car park from the road.

When they looked back over at the field they saw that the object had now changed course and was no longer heading towards them but had turned and was now moving away from them to the South East. It was clear that the object had banked as it was now at a sharp angle, giving a clear view of the lights on its underside. The main body of the object appeared to be black in colour, and was triangular in shape. It was dark but the shape could be made out as it blocked out the stars. Gary noted that unlike a stealth bomber or other known aircraft, the rear of the object was completely straight. On its underside there was a white light at each corner, and in the centre a dimmer red coloured ring of light. This ring appeared to be separated into sections. The object was very large indeed – Gary says that it was at least half the size of a football pitch, if not larger.

Witness drawing of the UFO as it now appeared: 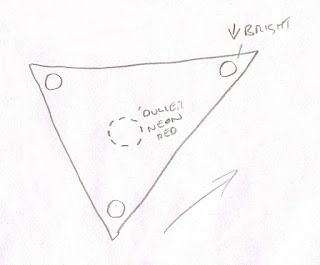 Photograph of the sighting location in the direction where the object was now situated: 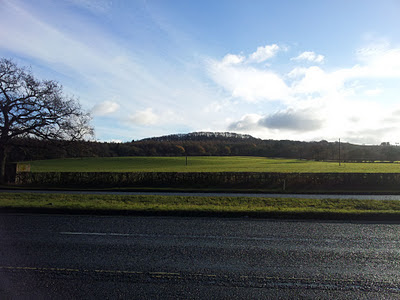 The object was moving slowly, Gary estimates about 20 mph. There was not much traffic on the road, and Gary noted that it was completely silent. The two witnesses continued to watch the object as it glided smoothly over the field. Then as it got close to a cluster of trees on top of the slope which make up part of Short Wood, it dropped down behind the tree line out of sight.

Aerial map showing the location of the witnesses and estimated path of the object: 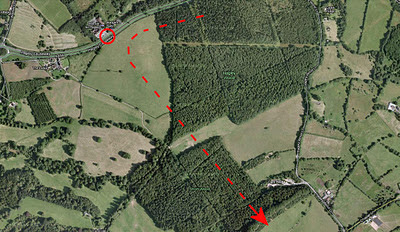 Both witnesses were amazed at what they had seen, and were certain that it had not been a conventional aircraft of any kind. Gary has had an interest in UFOs for many years and so realised that the object fitted in with descriptions of Flying Triangle craft. He was convinced that this is what they had seen. Over the meal they excitedly discussed the object. The following day he decided to contact the local Express &amp; Star newspaper in the hope that someone else would also report seeing the UFO.

The newspaper article was printed on the 13th December. Nobody else has yet claimed to have sighted the object on that evening (at least to Gary’s knowledge), however the newspaper made the connection between it and other Flying Triangle sightings which have occurred in the Birmingham area over recent years. It has been suggested that these sightings are all of the same object, which has been given the nickname “the Dudley Dorito” as the shape is similar to that of a Dorito crisp.

Below is the article from the Express &amp; Star which was published on 13th December 2011. You can access the article directly from the below link:

A mysterious triangular UFO dubbed the ‘Dudley Dorito’ has re-appeared in the region’s skies with the latest sighting reported near to a Midlands beauty spot.

Property worker Gary Nock and his family were on the car park of the Badgers Sett pub, Hagley, when they saw the distinctive object flying overhead.

The 52-year-old said the UFO, a black triangle with white lights at each end, was flying at low altitude from the direction of Birmingham.

He said the object had turned silently in the air and they had eventually lost sight of it as it passed over the Clent Hills.

The sighting occurred at around 6.40pm on Wednesday  and Mr Nock immediately looked it up on the internet after returning home. And he said the UFO bore a close resemblance to the “Dudley Dorito” first spotted over the skies of the Black Country a few years ago.

Mr Nock said he, his wife Susan, daughter Claire and her boyfriend Jamie Burgoyne had just arrived at the pub to have a meal.

“We were just getting out of the car when we saw this object overhead. It was very low in the sky and could easily be seen,” he said.

“At first I thought it could have been a jet but no aircraft has those types of lights to my knowledge.

“It banked to the one side and made no sound whatsoever which was also strange. It was so low we lost sight of it over the tree line of the Clent Hills. When we got back Jamie and I looked it up on the internet and saw the stories about the Dudley Dorito and what we saw does bear a resemblance to it.”

Mr Nock said he believed the craft could be an experimental military plane.

“I know about planes but have never seen anything like this.

“It does look a little like a B2 stealth plane but that makes a sound this one did not. It is a mystery.”

It is the latest in a long list of sightings over the Black Country.

The UFO was last seen earlier this year by security officer Glyn Richards while in the back garden of his home in Quarry Bank.

It has also been spotted over Tipton, Brierley Hill and Oldbury.

After meeting with Gary face-to-face to discuss the incident, I am absolutely convinced that this is a genuine sighting of a Flying Triangle craft. Gary appears very trustworthy and was absolutely thrilled at what he had experienced. He has thought about the sighting logically and compared the shape of the object to known triangular military aircraft. There are other things he informed me of which I am not able to disclose but which also make him a reliable witness. The fact that there were multiple witnesses should also not be ignored. I hope to obtain a statement from Jamie soon, which will be added to this report.

The object that Gary described seeing is a “classic” Flying Triangle craft. The shape, colour and large size match many other sightings. And the lighting configuration and colours is also the most commonly reported, although there are numerous other configurations also described. It is likely that there are many different types of FT, in much the same way that we have many different styles of cars. The segmented ring shape of the red light is not always reported, sometimes just a red light is seen, but there are numerous cases where this exact shape has been described.

As well as the appearance of the object, there are a number of other reasons why it was unlikely to be a conventional aircraft. Gary says that it was flying much too close to the ground, between 100-150 feet at most. It was gliding too slowly to be a jet, and was completely silent. At that altitude and distance a normal aircraft would certainly have been audible, especially after dark. It was clearly under control so was not a drifting electronically lit balloon, and was much too big to be a remote controlled model.

Although a secret military aircraft cannot be completely put out of the question in this particular case, I know of numerous cases which directly link these craft with extra-terrestrial beings, including some I have directly investigated. There are also cases where these craft have been seen to perform incredible manoeuvres, changing direction instantly, hovering motionless and displaying astounding velocity and acceleration. Also it is very unlikely that a secret military aircraft would be flown in full view over a highly populated area, this does not make any logical sense.

The newspaper article puts the incident down to another sighting of the “Dudley Dorito”. While it is possible that a single craft is returning to areas of Birmingham on numerous occasions, I find it more likely that these are separate sightings of different Flying Triangle craft. These objects are seen all around the world, and you can read of many other cases featuring similar objects outside of Birmingham. It should also be noted that the article states that the object flew over the heads of the witnesses, which is incorrect. It initially looked as though it would but then changed course and moved away from their location. Perhaps its occupants were aware they were being observed, or maybe decided that the brightly lit pub would expose them too much. We can only speculate as to why the craft was in the area in the first place.

The FT moved away in the direction of Bromsgrove, so it is certainly possible that there were other witnesses who have yet to come forward. If you have any further information about this incident, or feel that you may have also seen the object, please get in touch.