The witness in this particular sighting lives on the Rowley Hills near to Turners Hill, Rowley Regis. On Saturday 7th August 2004, he was sitting in his armchair, with a South Easterly view out of his window towards the Causeway Green, Langley. Due to the elevation of his house, the witness has a clear panoramic view of the surrounding area. It was a clear summer’s day and approximately 3 o’clock in the afternoon.

The witness suddenly noticed an unusual object hovering in the sky over Banford Hill Park less than two miles from his position. 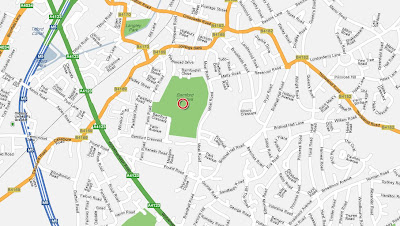 He got his binoculars for a clearer view, and could make out what looked like a dark rod-shaped object at a 45 degree angle. He rushed to get his analogue camcorder and began to film the object. As he watched, its angle changed to vertical and then diagonal in the opposite way to how it had started out.

He then noticed a small white object approaching from the North. It appeared to approach the object but then pass by underneath it and continue on a steady course until it was no longer visible. While this was happening, the dark object started to move slowly towards the East towards Birmingham. It was no longer situated above the park but was instead above some a nearby residential area. It also moved back to a diagonal angle in the sky.

A black helicopter then came into view from the South. At first the witness thought it was flying directly towards the object, but it proceeded to pass above the object and continue on its way. The witness felt that the helicopter pilot must have surely seen the object due to his proximity to it and the clear visibility.

The witness filmed the object for just under 4 minutes. Looking back, he wishes that he had thought to set up a tripod so that the footage would be more stable. After stopping filming, he continued to watch the object for several more minutes as it continued to move to the East until it was no longer visible.

At the time he felt that the object could not have been a balloon or kite of some kind due to the fact that it did not stay in place above the park, and because of the apparent size in relation to the helicopter.

Object as it appears on the footage: 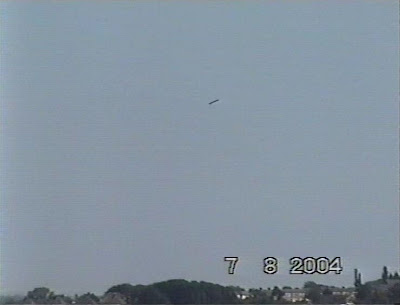 Close up of object: 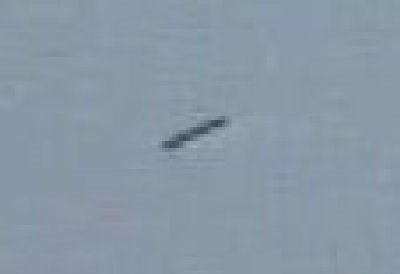 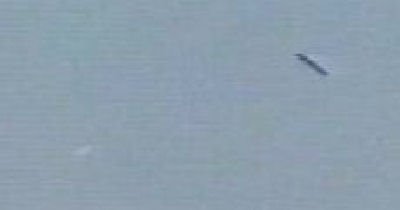 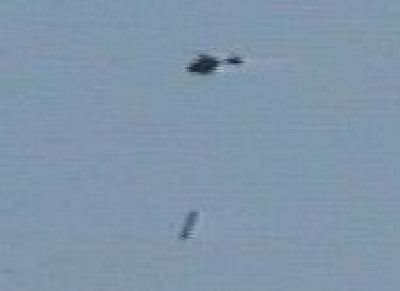 After looking at the available evidence, I feel that the object is probably a Solar Airship or other long inflatable of some kind that has become un-tethered. The object is not close enough to say which of these is more probable. Even though Solar Airships are relatively modern, it is highly likely that they were already available back in 2004. They are large black cylinder-shaped balloons that are filled with air. When this air is heated up by the sun’s rays they float up into the sky. They are quite large in size, and are usually tethered like a kite. Below is a photograph of an 8 metre long Solar Airship available from Argos: 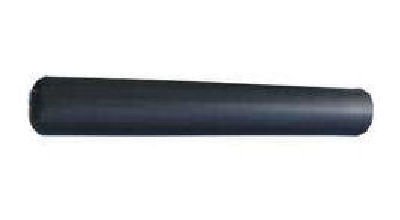 It is possible that someone was flying one of these at the park or somewhere else nearby, and it broke free from its tether. From the video footage it certainly looks like the object is freely drifting and rotating in the air. It does not perform many movements which would suggest it was under intelligent control. As the helicopter approaches, the object does seem to angle itself towards it, but this could quite easily be pure coincidence.

I put forward this suggestion to the witness and he also feels that this is a possible explanation for what was observed. I and the witness both wonder if the helicopter pilot noticed the object. If so, maybe he identified it as a Solar Airship or inflatable, and this is why he did not change his course.

We appear to have an adequate explanation for what the dark object could have been, but what could explain the small white object? After viewing the footage, I believe that this was actually a plane flying across the sky in the distance, and was much further away to the witness than the dark object was.

Unless we receive any more evidence to the contrary, I believe that the object seen was a Solar Airship or other similarly shaped inflatable. Due to the time of day, clear weather conditions and appearance, it is certainly possible that there were other witnesses who have yet to come forward.