This report covers a multiple witness sighting of a bright star-like object which was observed moving around the sky for quite a long time. During the sighting a number of photographs were taken, which are analyzed later. Jayne Scopes, the mother of the family, contacted me shortly after the incident to ask for my opinion on these photographs.

At around 10.30pm on Sunday 7th March 2010, Jayne’s daughter Bekki was in the back garden of her house on Peal Close, Rochester, Kent, with her boyfriend Mackenzie. It was a relatively clear but cold night, with very little cloud cover. Both the stars and moon were visible. Bekki noticed in the night sky to the South West West what at first appeared to be a very bright star, which looked like it was flashing and rapidly changing colour between red, blue and green.

Since her gran died, her mum has always said that her gran can be seen as the brightest star in the sky. After 10 minutes, she and her boyfriend went back inside the house and called Jayne, telling her that she could see gran’s star flashing in the sky. She came out to take a look. At first Jayne thought the object was just a large bright star, and that the blinking effect was caused by light cloud passing in front of it. She called out her husband Trevor to also take a look. They both decided it must be a star and headed back inside.

A short while later, Bekki informed her that the “star” had moved position in the sky. Jayne was curious and so went back outside and stood and watched the object with them for a while. Sure enough it was slowly moving across the sky on a straight flight path. It was now that they realised it was an object within the atmosphere. It looked like it was over the area of Wainscott. Jayne assumed it must be a helicopter and so once again returned inside with her husband. Bekki and her boyfriend continued to watch the object.

Aerial map showing location of witnesses and area over which UFO was probably situated: 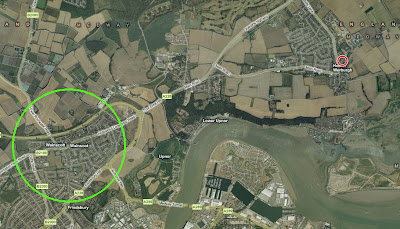 Ten minutes later, she called her parents back outside again, telling them that the object was now moving more. Her younger sister and her boyfriend also headed out to see what the fuss was all about. Sure enough the object’s movement was more noticeable now. It moved towards their direction, then away, then to the right and back again at a constant speed. It was completely silent, and it was hard to judge exactly how high it was or how big it was, and whether it was a complete glowing object or a light on a bigger object.

Bekki suggested to Jayne that she should try photographing the object on her mobile phone camera. When she did so it came out too dark, so Bekki went to get her digital camera, zoomed in on the object and started to take photographs from the patio. At first she tried with the flash on, but the images were dark and nothing came out. However with the flash off, the camera picked up the object as a long bright orange erratic line (See photograph analysis).

The sighting continued for about an hour, then suddenly without warning the object vanished. The witnesses were sure it was not obscured by cloud, as it was quite a clear night, and the area of the sky where the object was situated was completely clear. The object, whatever it was, had disappeared without trace.

The witnesses remained out in the garden for several minutes longer to see if the object would reappear but it did not. It was very cold so they all decided to head inside.

This is a very interesting sighting, and although the object was distant with no clear shape or structure, it has the possibility of being something unusual.

Many sightings of slowly moving glowing orbs of light can be put down to Chinese lanterns. However lanterns are usually a fiery orange colour, not bright white (although they can sometimes appear in this way). But while lanterns do flicker they do not change colour. Also the sighting lasted for an hour, this is far too long for a lantern to have stayed lit (they can stay lit for up to 45 mins but usually burn out much faster).

Could the object have been a helicopter at high altitude, so high that the witnesses could not hear the rotor blades? Perhaps, but this does not explain how it suddenly vanished without trace, the pilot certainly would not have switched all the lights off after dark. If the object was over the area of Wainscott where it appeared to be, then Jayne says they would certainly have been able to hear any loud noise coming from it.

As the object changed course and moved back and forth, it could not have been a satellite or the International Space Station, and it was visible far too long to have been an earth light. Besides these do not usually appear over urban areas. Also it appeared to be under intelligent control.

I feel that if there is a mundane explanation for the object, it is most likely to have been a remote controlled LED balloon, set to flash different colours. These can stay lit for a very long time as they are electronically lit, not alight. Also this could account for the movement patterns seen. However this does not explain how the object suddenly vanished without trace. Surely if it was an LED balloon, the witnesses would have seen it slowly descend to the ground out of sight? Therefore the true origin of the object is currently unknown.

Below are the photographs Bekki took with the flash on: 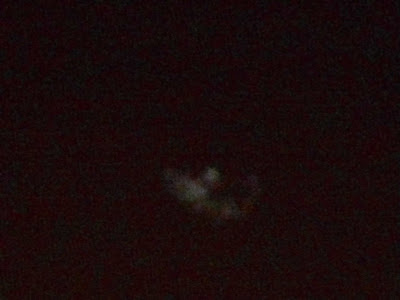 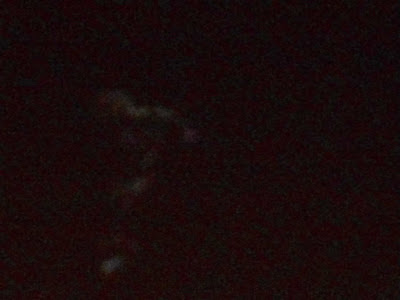 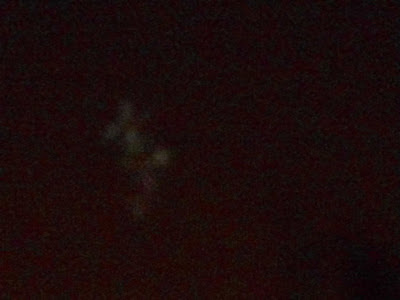 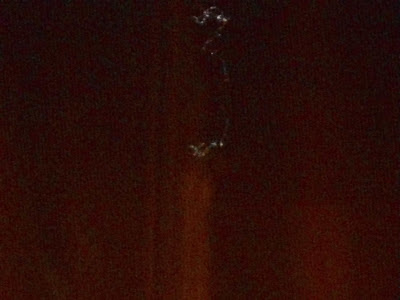 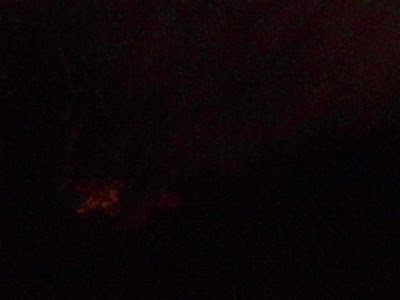 As you can see, the images are too dark to pick much up. Most show blurred shapes but nothing distinct. In one of the photographs the object has appeared as an erratic faint white line. I assume this has been caused by camera shake when taking the photograph while zoomed in (Contact me and let me know if you have another suggestion). Below are the images she subsequently took with the flash turned off: 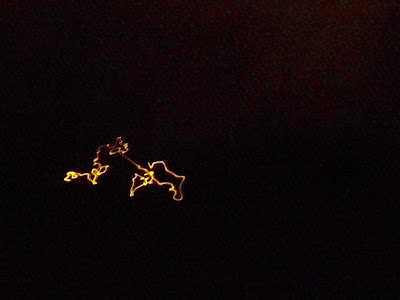 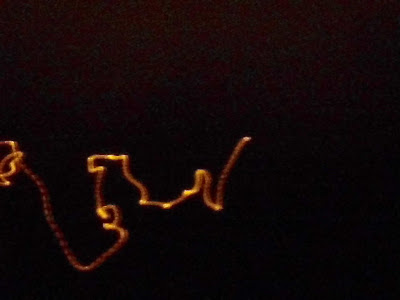 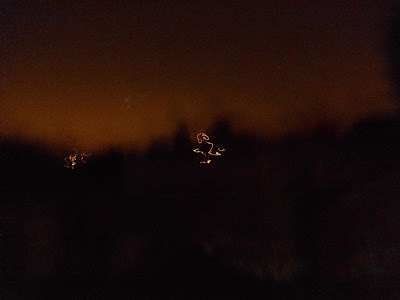 The erratic line is now very clear indeed and glowing brightly. It is interesting that the colour seen is bright orange, yet the object appeared to be white with various flashing colours of red, blue and green. This orange colour is possibly due to the low light conditions (Again contact me if you have another suggestion for why this might be).

For an unknown reason, the third photograph shows two distinct erratic orange lines, with a similar third paler line above and in between them, in triangular positioning. The pattern of the three lines is the same so I assume that this has been caused by loss of focus which has split the image into numerous duplicates. It is unlikely that the object split into three separate orbs of light, as this would have been visible with the naked eye.

In several of the photographs there is what appears to be a classic saucer-like shape with a raised central area above a disc, but this could be just be an illusion caused by the light captured, and I do not believe that these images prove it was a flying saucer or show the object’s true shape, I just find them interesting.

Firstly here’s two zoomed images taken from two of the photographs with the flash on: 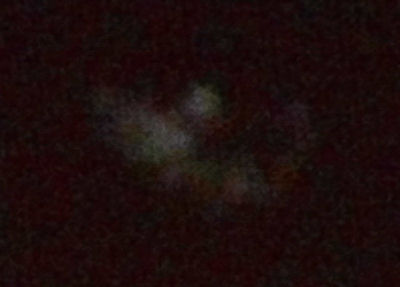 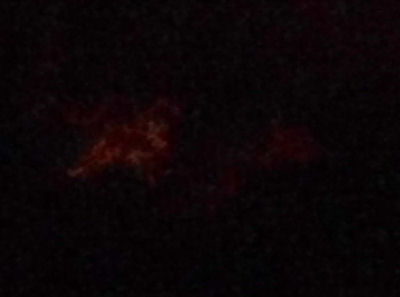 On the second photograph with the flash turned off, the right hand end of the line looks like a small saucer shape, similar though not identical to the shapes above: 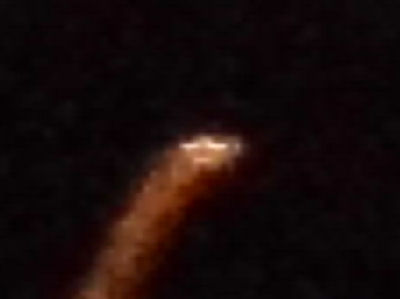 Are the above observations relevant or not? You’ll have to decide that for yourself. In the other photos the shapes do not represent a saucer at all, so this is far from conclusive.

There is no point of reference in the photos, but Jayne assures me they were taken looking into the sky visible above the end of the garden. I have no reason to doubt this, as there is no real incentive to make up the story, and she has been very open with me about all aspects of the sighting, which I am very grateful for.

Jayne says there are no other lights or reflective points in the garden which could have accounted for the glowing lines seen. She is sure that these are how the camera has picked up the object. There are some dull flecks of light which may be other stars in the night sky, but this is hard to say for certain.

I always enjoy receiving photographs to back up testimonial evidence, and currently this case will remain an intriguing mystery.