In November 2010 Helen and her boyfriend Chris experienced a sighting of a large glowing spherical UFO near to the village of Corris in Wales. She originally informed PRUFOS about the incident, but in early 2011 decided to post the sighting on Richard Hall’s website, which is how she initially got in touch with me.

Mid-evening on 6th November 2010, Helen and Chris were driving from their house at Corris Uchaf along the A487 to the nearby town of Machynlleth to go food shopping. It was around 7.30pm, and an overcast, wet and windy evening. It was already dark due to the time of year but the sky was covered in cloud so the stars were not visible.

Aerial map showing the location of Corris Uchaf (A) and Machynlleh (B): 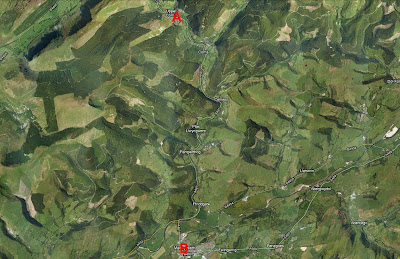 As they turned a corner in the road Helen noticed a large circle of light in the sky in front of them. She was chatting with Chris so at first did not really engage with what she was seeing. As the colour of the light was neon orange she assumed at first that it was a street light positioned up high somewhere she had never noticed before. As she looked at the light it slowly dawned on her that there could not be a street light in that position. They came to a clear stretch of road and at this point it became obvious that the light was coming from a huge orange glowing sphere that was suspended high up in the air. Helen had now been watching it for at least a minute, and it hadn't moved at all during this time. 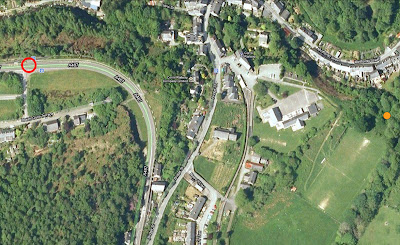 Photograph taken from the initial sighting location with the position of the UFO indicated on it by the witness: 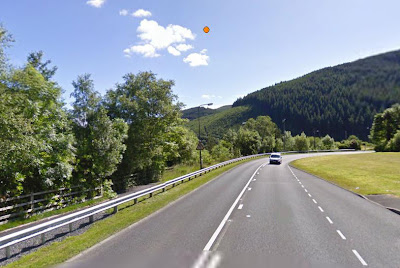 She exclaimed to Chris “What the hell is that?!” to which he replied the same. They watched the object for about a minute while Chris found somewhere suitable to pull over the car. As he did so they discussed the idea that it was a Chinese lantern, but quickly dismissed this theory. They had seen lanterns launched from a wedding earlier in the year so knew exactly what they looked like both up close and at a distance. Helen's then considered the idea that it was some kind of planet that had come into view in the sky and for whatever reason appeared very close to the Earth. But deep down she knew it could not be this as the sky was overcast. The object was very large in the sky, about twice the size that the moon would have appeared if it was not hidden by cloud. It had clearly defined edges and was glowing a constant intensely bright orange-red. It was completely silent.

Chris stopped the car close to the Braich Goch Inn so they could get out and get a better look at the object. Almost immediately after they got out, the object suddenly ascended at a rapid speed. Chris shouted “It’s moving! Look!” The object then descended back downwards to where it had been, before moving horizontally a short distance and then vanishing without trace! It did not look like it had flown into the clouds. It only took several seconds for it to make these manoeuvres. 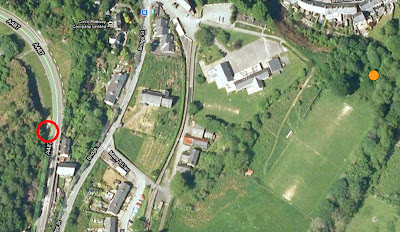 Photograph taken from the parking location in the direction the UFO was seen: 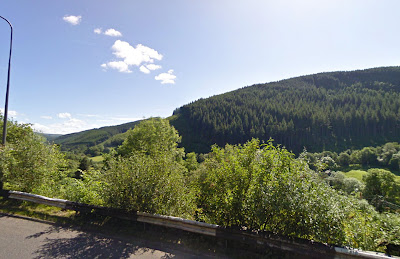 Once it had gone, Helen and Chris got back in their car and continued their journey. On the way home later they looked for it again but it had not returned.

Helen is completely convinced that what they witnessed was either a covert military craft or a genuine UFO. I would agree with this statement. Often orange orbs of light seen in the sky can probably be explained away by Chinese lanterns. However this object seemed much too large and clearly defined for it to have been a lantern. It also displayed manoeuvres that suggested it was under control – hovering motionless for over two minutes, despite the windy weather, before suddenly moving various directions and then vanishing. A lit inflatable or lantern would surely have drifted in the wind during this time or moved on a continuous path. But it is the apparent size of the object which impresses me the most. Lanterns are actually cylindrical in shape and only appear as orange orbs at a distance. They are not very big and would certainly not appear like something bigger than the moon unless they were very close, at which point their actual shape and structure would become visible.

It was clearly not a normal aircraft or helicopter. Due to the manoeuvres it performed it could not have been a hot air balloon. The sighting took place in quite a rural area so perhaps it was a secret aircraft the military were testing out. However due to the appearance of the object this seems quite unlikely. For what purpose would the military be flying a huge glowing spherical object around? It seems more probable to me that the object was not being flown by the military, and was possibly of extra-terrestrial origin. There have been many sightings before of similar UFOs all around the world, some of which I have directly investigated.