It was a clear evening on the 6th July 2009. Marie who lives in Coleshill, Birmingham, was watching TV in her house on Doris Road. Her daughter came home from work and decided to let the dogs out into the back garden. It was her who first spotted the lights in the evening sky at approximately 10.20pm. She called Marie who went outside to see what the fuss was about. Looking to the south she was amazed by the sight of nine orange glowing orbs of light that appeared to be travelling in a line across the sky, heading in an easterly direction. She estimates they were at least a few feet across in size, though it was hard to judge. They appeared to be moving about the same speed an aeroplane at high altitude would. At first she thought they may be Chinese lanterns. Her and her daughter watched the lights for a couple of minutes as they crossed the sky.

Marie decided to then go and get her son. While her daughter called out for the neighbours to come and also take a look, Marie ran inside and upstairs to wake him. On route she also rang her mother who lives in Kingsbury. By the time she reached the window she could see that the lights had started to form into a circular shape in the sky. It was at this point that the idea the lights were Chinese lanterns left her head, and she assumed they might be something else entirely. 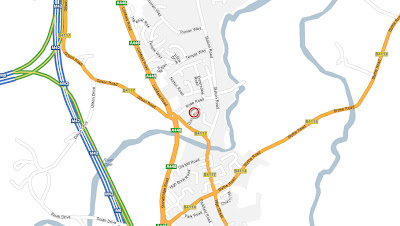 Marie ran back outside with her son, and continued to watch as the nine lights formed a wide circular pattern. Her neighbours, who live around the corner in Ennersdale Road, had also come out to see the display. As soon as this circle was complete, a tenth brighter light seemingly appeared from nowhere to the west. It stayed completely still for two minutes, and then suddenly began moving extremely fast towards the other nine objects. It got to about half way between where it had appeared and the circle of lights when it suddenly stopped moving again. At this moment all the nine lights in the circle began to fade away simultaneously. It was now that Marie remembered her camera, which she went to get. She managed to take a photograph of the individual remaining light. The picture is a little blurry as she zoomed in on the object as much as possible: 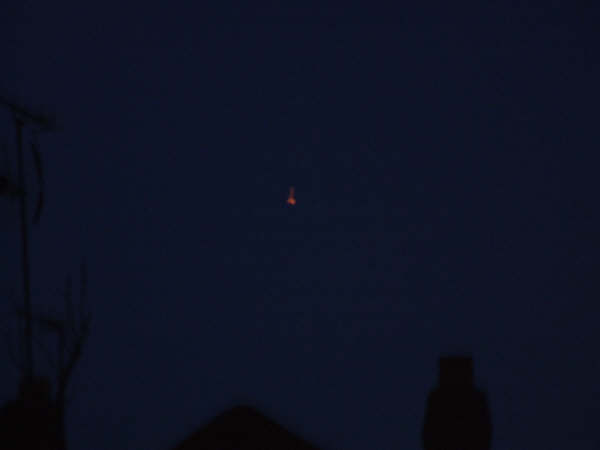 Soon after taking the photograph, the remaining bright object then also vanished. Her neighbours are both aviators, and are usually sceptical about such things. But after seeing the unusual movement patterns of the objects, and the sudden appearance of the tenth object, they feel that they were not Chinese lanterns.

This is a very interesting sighting. The physical appearance of the objects certainly fits in with them being lanterns. But there are a number of points about Marie’s sighting which seem to suggest otherwise. Marie mentioned that if it was random drifting which caused the objects to form a circular pattern this was a big coincidence, as it was quite a pronounced shape. The sudden appearance of the tenth object is a mystery - if it was a lantern, how was it not spotted while rising up into the sky? If the object was drifting, it seems very odd that it should remain stationary for quite a while before suddenly moving rapidly in the direction of the other objects and then just as suddenly hovering still again. And also if it was drifting, why did the circle of objects remain stationary while the tenth moved so fast towards them? Was it another coincidence that the nine objects all vanished simultaneously? Usually lanterns tend to go out one at a time as they burn out. All of these points suggest that what was being witnessed was something other than Chinese lanterns.

Marie has also posted her sighting to the UK UFO Sightings website. This article can be found here:

Two days previously there was another sighting of twenty orange glowing objects in the Solihull area. This was also reported on the UK UFO Sightings website, although the witness did not contact BUFOG:

In the comments below this report, as well as noting that Marie asked about her sighting here, someone else claims that these July 4th objects were Chinese lanterns they had set off at a party. However so far nobody has come forward about the lights over Coleshill. From the evidence it is possible that they were just lanterns, and that the movement patterns seen were just very erratic wind conditions (Although at ground level at least it was a very calm evening). But there is still the possibility at this point that the objects were being controlled, and if so, then by who?

If you have any information regarding this sighting please get in touch with BUFOG.