At 11pm on the evening of 6th April 2010, Brian (name changed for privacy reasons) had just left his girlfriends house. He was on the corner between Warley Road and St Johns Road in Oldbury, Birmingham and was walking home. It was a quiet evening, with light cloud cover obscuring the stars from view. It was still and the temperature was mild. 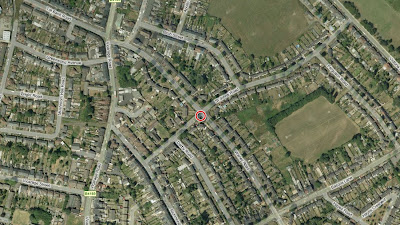 Brian’s attention was suddenly drawn to a glowing light in the sky. He looked to the source of the light, and saw a glowing orange light. It was moving towards him from the South South West at about the same speed a plane would fly at. It appeared to be quite high, at least several hundred feet, but was below the cloud layer. At first he assumed it was a plane, and so merely glanced at the object before continuing his walk.

He walked a short distance along St Johns Road. He looked up again into the sky. The object was now a lot closer and he could see it definitely was not a conventional aircraft of any kind. The object was diamond shaped and glowing an orange-red colour. There were no visible markings but its straight edges were clearly visible. It was hard to judge its exact size but considering it looked to be at significant altitude, it must have been quite large. Not only was it a lot closer but it was also now stationary in the sky, and completely silent. It appeared to be within a mile of his position. Brian stared at the object for a few seconds wondering what it could be.

Suddenly the object appeared to duplicate into two vertically. It did this within a couple of seconds. He could now see two diamond-shaped objects, one above the other. The upper object then massively picked up speed and flew right across the sky in the direction of West Bromwich to the North North East. The remaining object then began moving away back the way it had come from, and at the same time descending in the sky. Brian continued to watch it until it vanished behind some trees in the direction of Barnford Hill. He was absolutely convinced that he had seen something out of the ordinary that could not be easily explained, and also feels that someone else must have also seen what had taken place as it was very visible in the night sky.

This is a very interesting sighting indeed. Often orange/red coloured lights seen in the sky at night turn out to probably be sightings of Chinese lanterns, but there are a number of aspects to this case that certainly suggest otherwise. The shape of the object suggests a solid structure – lanterns are usually rounded or cylindrical in shape. The fact that the object appeared to duplicate into two (not split in half), and the movement patterns throughout the incident, especially the incredibly fast acceleration of one of the objects, means that many of the usual explanations can be discounted.

It appears that the objects were under intelligent control. The object which moved away from the location very rapidly moved too fast for it to have been merely drifting in a sudden gust of wind – it covered the entire sky in a couple of seconds and was soon out of sight in the distance. It seems very unlikely that a remote controlled model of some kind would be responsible – the duplication into two would be very hard to do convincingly, and again the acceleration and speed of the 1st object was much too fast. Obviously the incident cannot have been down to meteorites, as the initial object had stopped moving before it duplicated into two.

It is interesting to consider what happened to the remaining object. The witness was certain that it was descending in altitude as it moved away. Although he lost sight of the object before it reached ground level, perhaps it did land somewhere in the distance away from him, either intentionally or unintentionally.

Although there were no markings or visible propulsion which would suggest the objects seen were craft of some kind, their movement patterns certainly point towards this possibility. If you feel you may have also seen one or both of the objects, please get in touch with me.