On the evening of 6th January 2010, BUFOG founder Craig Lowe had an unusual sighting of a formation of objects. It was 8.55pm, and Craig had stepped outside his house on Bent Avenue, Quinton, for a cigarette. 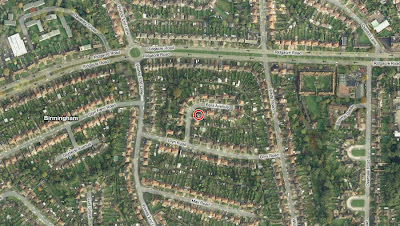 It was a clear, very cold evening with snow on the ground. He looked up at the stars overhead and noticed directly above him a faint formation of objects travelling to the South. They appeared grey in colour and looked a bit like faint stars but were larger in size than a star, and looked to be a roundish-square shape. Most of the objects were grouped into three triangular formations. They were moving at quite a fast speed, especially considering that they were at a high altitude.

It took the objects only 1.5-2 seconds to cross the sky until they were out of sight. During this time they shifted formation and before they vanished they had appeared to lose the triangular formations and were clumped and aligned with each other instead. After they had vanished into the distance there appeared to be small twinkling lights in the sky akin to a sparkler. This was very faint but when Craig squinted he could see them clearer.

Rough formation at end of sighting:

When he first saw the objects he assumed they must be a flock of birds, flying South for the winter. However there are a number of points which made him question this explanation. The objects appeared far too fast to be birds, they were lost from sight within only a couple of seconds. They also appeared to be at very high altitude, higher than birds would usually be seen to fly at. Craig has also never seen flocks of birds flying after dark in freezing weather conditions (-5 degrees C). In fact it is rare to see any birds flying when it is this cold.

Birds also tend to keep formation when flying across the sky, it seems odd to me that the objects at first appeared to be in formation mostly made up of several triangles, but a couple of seconds later had changed their layout. Unless of course the initial pattern was an illusion and the objects were just milling about one another randomly.

Because of the above reasons, there is speculation as to whether the objects really were birds, or something more unusual. It remains an intriguing sighting.