Late evening on the 5th July 2010, Tom Smith and his wife Lana had just returned from a fireworks display in Carmel to their home on Dover Drive. They unloaded their SUV and Tom headed inside the house. Lana remained out on the front drive for a moment looking up at the sky. It was a pleasant night with a clear sky and a very low wind blowing, estimated about 3-4 mph. Suddenly Lana noticed a glowing orange object heading towards her from the South West over the house. She called out Tom to also take a look at the object as it passed over almost overhead. 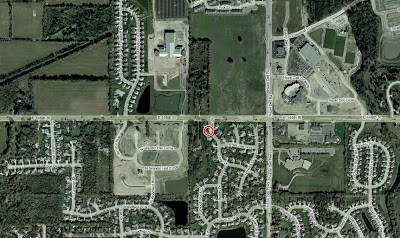 Photograph of Tom and Lana’s house over which the UFO was seen: 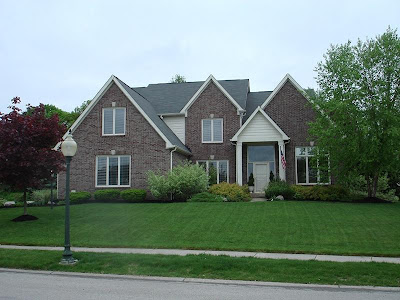 The object appeared to be quite large, Tom estimated it to be about the size of a stealth bomber. It was at quite high altitude but appeared lower than the altitude aircraft would fly at. Due to the brightness of the orange glow coming from the object it was hard to see its actual shape. This glow was constant in brightness and not flickering at all. The object was heading on a straight course to the North East. Tom does not remember whether it was moving in the same direction as the wind or not. It appeared to be moving quite fast, Tom estimates about 300 mph.

The couple watched the object head off into the distance. As it headed away, Lana tried taking a phoptograph of the object on her mobile phone, which unfortunately just came out as a glowing orange pinprick of light: 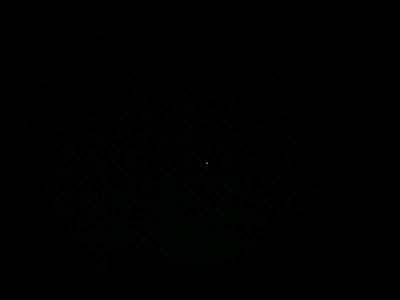 Zoomed photo of the UFO: 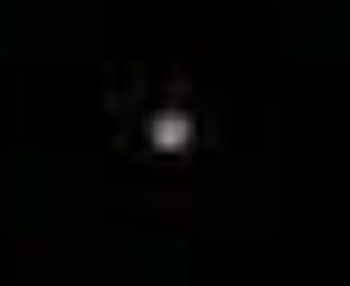 Within a couple of minutes it had been lost from sight. Tom and Lana remained on the drive chatting about what they had seen. A few minutes went by and then they noticed a second object, exactly the same as the first, and heading on the same course. Again it flew overhead and was lost from sight in the distance. They continued to watch the sky.

Another few minutes went by and then Lana spotted a third object heading towards their location. At this point Tom decided to go and get his binoculars from the garage to take a closer look. When he first looked at the object, all he could see was an intense orange glow. He readjusted his binoculars and made out a triangular shaped object from which the glow was emanating. He and Lana watched this third object go out of sight. They remained outside a while but no further objects came over so in the end they headed back inside.

Tom is ex-military, and has worked for 18 years in the Air Force Reserves. He says that the objects they saw were like no aircraft he had ever seen before. They had no beacon lights on them and were glowing intensely. Both him and Lana were in awe at what they had seen. Tom says that although they have a digital camera they didn’t think about using it at the time as they were so amazed at what they were witnessing.