At 7.30pm on the evening of 4th November, Andrew and his wife Jenny (names changed for privacy reasons) were near to their house on Paul Street, Wednesbury. It was a clear evening, and the sun had almost fully set. Andrew suddenly noticed an orange light in the sky off to the right of Moor Street. He pointed it out to Jenny and they had a good look at the object. It looked like the shape of a spinning top but with sparkles around the edge, and was glowing a bright orange. The object did not appear to be very large and appeared to be hovering stationary in the sky. It was completely silent. Jenny asked “Have you ever seen that before?” to which Andrew replied “No”. 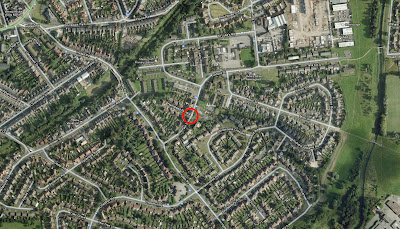 The witnesses stared at the object for a short while, then suddenly it started to ascend vertically and blinked out. A few moments later it came back into view to the left of the road between the clouds. At this point Andrew got out his mobile phone and took several photographs of the object. Unfortunately as it was after dark these did not really come out and all that could be seen on them was a slight orange glow. They continued to watch and soon afterwards the object was lost from sight and did not reappear.

It is probable that the objects that Andrew and Jenny saw were in fact two Chinese lanterns. These are very popular around Halloween and Bonfire Night, and many were launched all around the UK. The colour of the objects is in line with them being lanterns. The appearance that Andrew describes sounds a little odd, but I feel that the sparkles he is talking about around the edges of the object were probably caused by the flame inside flickering. Lanterns usually tend to ascend slowly because of the hot air inside them, however as it was a still night they could well have appeared to be stationary, especially as they were not observed for a very long time.

When the object suddenly vanished this could well have been the flame inside it burning out. Andrew was astounded by the fact that the object vanished to the right of the road and then a moment later reappeared at the left. However I feel it was probably two separate lanterns that had both been launched in the local area. The first one burnt out, and then soon afterwards the second one came into view. This is only a theory and it is not definite that the objects were lanterns, but this is the most likely explanation.