This sighting took place at 12.30am on Saturday 4th October 2009. Chris Vince was having a cigarette at the back door of his house on Humber Avenue, Coventry. He was looking into the night sky towards the city centre. It was a dry and still night, with light cloud cover. The stars and moon were both visible. Suddenly he noticed a bright orange orb of light moving across the sky on a level course in a Westerly direction. It was hard to judge the size, distance and height of the light, but he estimates it was at least a mile away from his position. It looked quite large, possibly due to the brightness of the light coming from it. This light was constant and did not change in brightness at all. As he watched he then saw a second similar object following along behind the first on the same course. 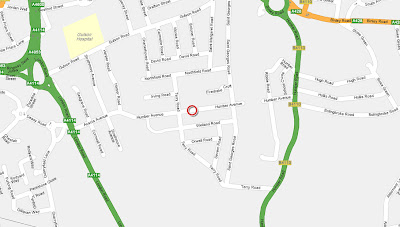 He called his wife who came to the back door and also saw the lights. She was amazed and asked what the objects were, but Chris had no idea and had never seen anything like them before. It was a quiet night and they could hear no sound coming from the objects. They watched them moving across the sky, visible above the rooftops of nearby houses. A third light appeared, again following the same course. At this moment Chris decided to run upstairs to get his mobile phone to try and take a photograph. From the bedroom window he could now see four lights, all travelling after one another.

Chris ran back outside and both him and his wife walked down the garden to continue watching the lights. He tried taking a photograph but it was too dark and didn’t come out. They continued to watch until they all moved out of sight behind the buildings. They were both mystified by what they had seen and soon afterwards Chris decided to contact BUFOG about the sighting.

From the description and movement pattern of the objects, I believe that they were probably a number of Chinese lanterns drifting in the wind. These appear as bright orange glowing orbs at a distance. Although they sometimes are seen to flicker, they also sometimes appear constantly bright. Chris said the weather conditions were still, however there may well have been a breeze at the altitude the lights were seen at. The fact that they all moved in the same direction with no sign that they were under intelligent control could well mean they were drifting rather than being propelled. It was hard for the witnesses to judge the distance and therefore size and speed of the objects, so there are no indications that the objects may have been something other than lanterns.