The Jones family live in the area of Pool House Farm, Wombourne. At 8.30pm on the evening of 4th September 2010, Mr Jones came out of his house to collect something from the car. It was a calm dry evening but cloud cover blocked the stars from sight.

As he walked down the drive a light in the sky caught his attention. He looked up and saw a glowing orange tall dome-shaped object crossing the sky. The object was very bright, with an even brighter yellow-orange glow coming from the base of it. Mr Jones estimates it was about half a mile from his position. It looked about the size of a double decker bus, and appeared to be quite low down, about 40 feet up.

Mr Jones was shocked by the appearance of the object and the way in which it appeared to be flying on a controlled path across the sky. He called his partner and 3 children to also come and take a look at the object. It was moving in a Westerly direction, estimated at about 50-60 mph. As it headed on a straight course, it slowly increased in altitude. His wife ran back inside and grabbed a camera. She tried taking a photograph of the object but it wouldn’t come out due to the distance and the fact it was after dark. They all watched the object for about 4 minutes until it was obscured by cloud to the West. 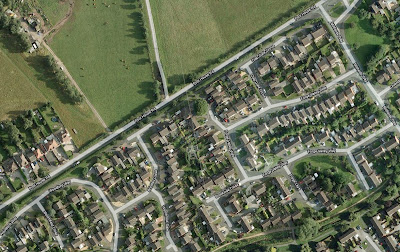 Even though the witnesses felt the object could not have been a Chinese lantern due to its apparent size and straight flight path, I feel that this is more than likely the explanation for what was seen. As lanterns are launched after dark and are very bright, they can often appear larger than they actually are because there is no point of reference in the night sky. They often tend to drift on a straight course across the sky when they are caught in an air current, and will usually slowly gain in altitude because of the heated air inside them. The description of the object clearly matches a lantern, with a brighter glow coming from the centre of the base where the source of the flame was. Even though it felt like a calm night, there may well have been a slow current of air at the altitude the object was at which could have accounted for the movement observed. It did not perform any manoeuvres which would suggest it was under intelligent control. Therefore I feel quite certain that the object seen was a Chinese lantern.