This sighting took place in the early hours of the morning over the town of Coventry. The witness Steve Mills was in his house on North Road. It was 2.45am on Saturday 4th July 2009. As Steve works shifts, he is often awake in the early hours. Suddenly he heard a commotion in his back garden, the sound of a blackbird’s distress call. He went out back assuming that the cat was worrying them. He did not see anything in his garden, but as he looked around he became aware of an object on the horizon with yellow/white lights on it to the south of him. It was travelling from west to east in a perfectly straight trajectory. It was quite low down in the sky, Steve estimates it was about 1000 foot up, much lower than a plane would generally fly. Due to the distance it was not very clear so he went to grab his binoculars from the kitchen. Steve is an astronomer so keeps a pair to hand.

Drawing of object showing comparison with light from Jupiter: 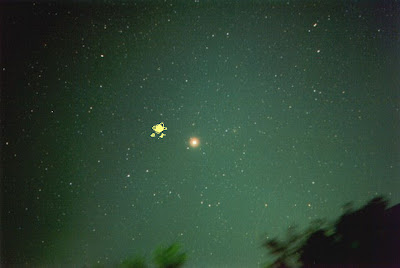 He returned outside and found the object through the binoculars. It looked like a large very bright yellow/white light with two smaller lights following after it which were partially obscured by the main light. The three lights were in a triangular configuration. Jupiter was prominent in the night sky, and Steve says the main light was at least a magnitude more than this. At first he assumed the object must be a helicopter. But if it was he would have definitely been able to hear the noise of the rotor blades, or engine sound if it was a plane, as it was a very quiet night. However as the object passed from horizon to horizon he heard another very unusual sound which he assumed was coming from the object. He describes it as a slow whirring sound that seemed to be everywhere at once, it was quite quiet but still noticeable, and once he had lost sight of the object the noise ceased. 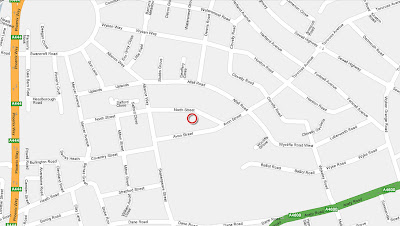 After checking online, it became clear that the object seen was more than likely the International Space Centre. There was a transit of the ISS at the same time as Steve saw the object, and on the same trajectory across the sky. This obviously means that the noise Steve heard at the time was coming from something else entirely, and is still a mystery.