Since last year BUFOG has been investigating UK-based cases reported via the UFO Info website. Many of the witnesses who write these reports never come back with further information which usually results in an investigative dead end. In March 2014 I received two reports from Dumbarton, Scotland seemingly reporting a UFO with numerous white lights on. Although neither witness has yet come back with additional information, the fact that both individuals have separately reported the UFO is significant, so I have decided to write this report based on what I am currently aware of.

It was 8.30pm on 4th March 2014 Grant and two other individuals were driving along the M8 motorway, which runs along the edge of the River Clyde. They caught sight of three bright white lights in a triangular formation moving slowly to the right over the area of Dumbarton on the far side of the water.

Photograph of Dumbarton from the M8: 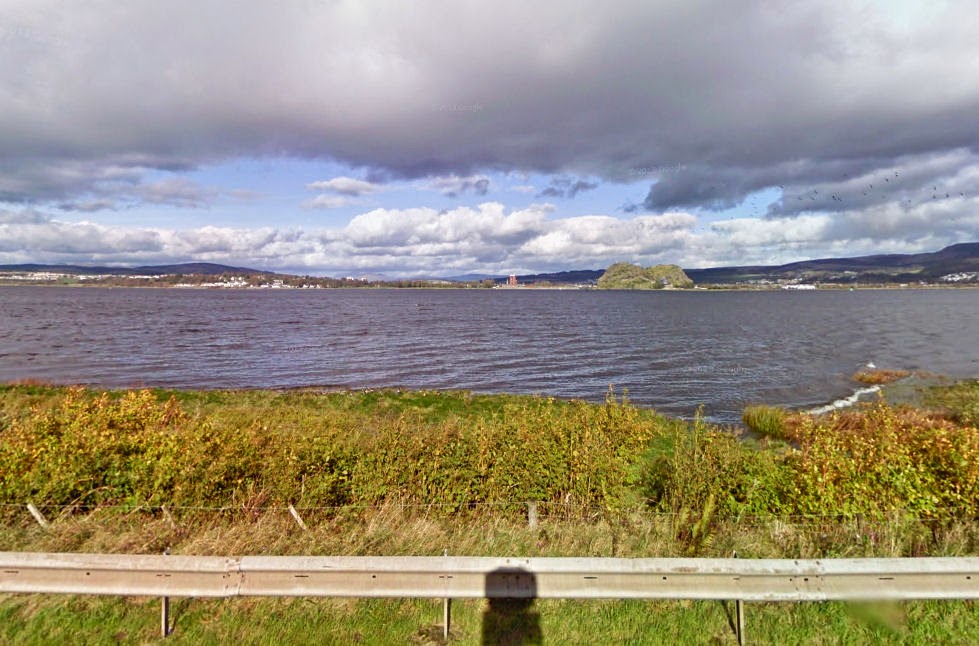 Suddenly one of the lights seemed to vanish from sight, perhaps due to the angle they were viewing them. This left two lights side by side. After a few seconds the third light reappeared, and they now appeared to be in a vertical line to each other. They started moving to the left slowly. Then without warning all three lights dropped down together at a fast speed behind a hill near to Dumbarton Rock and were lost from sight.

Aerial map showing the M8 (A), Dumbarton (B) and Dumbarton Rock (C): 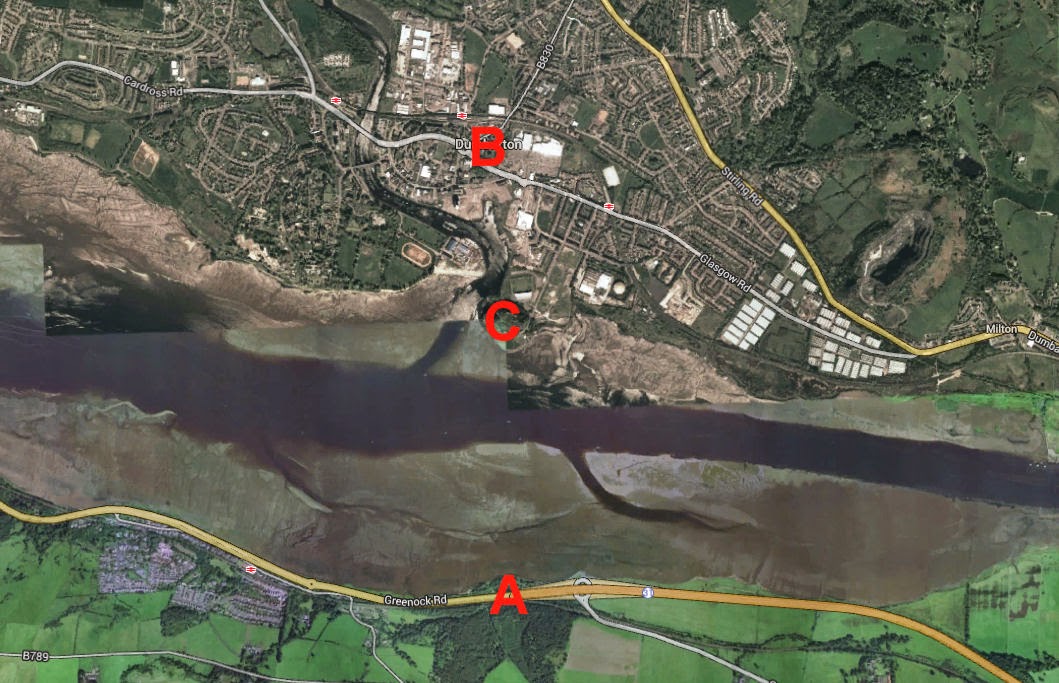 Grant decided to turn the car around and start driving back along the other side of the M8 to see if they could catch sight of the lights again. Unfortunately the lights did not make a reappearance so they soon continued their journey.

Five days later at 5.10am Ian was driving East along the M8 motorway towards Glasgow. Just before he reached the town of Langbank he glanced to the left at Dumbarton over on the far side of the river. Near the edge of Dumbarton is a quarry. He noticed a single white light on the top of the quarry. He initially thought it may be light from a vehicle, but he had driven the same route every morning and never noticed it before.

Aerial map showing the estimated sighting location (A) and Dumbarton (B): 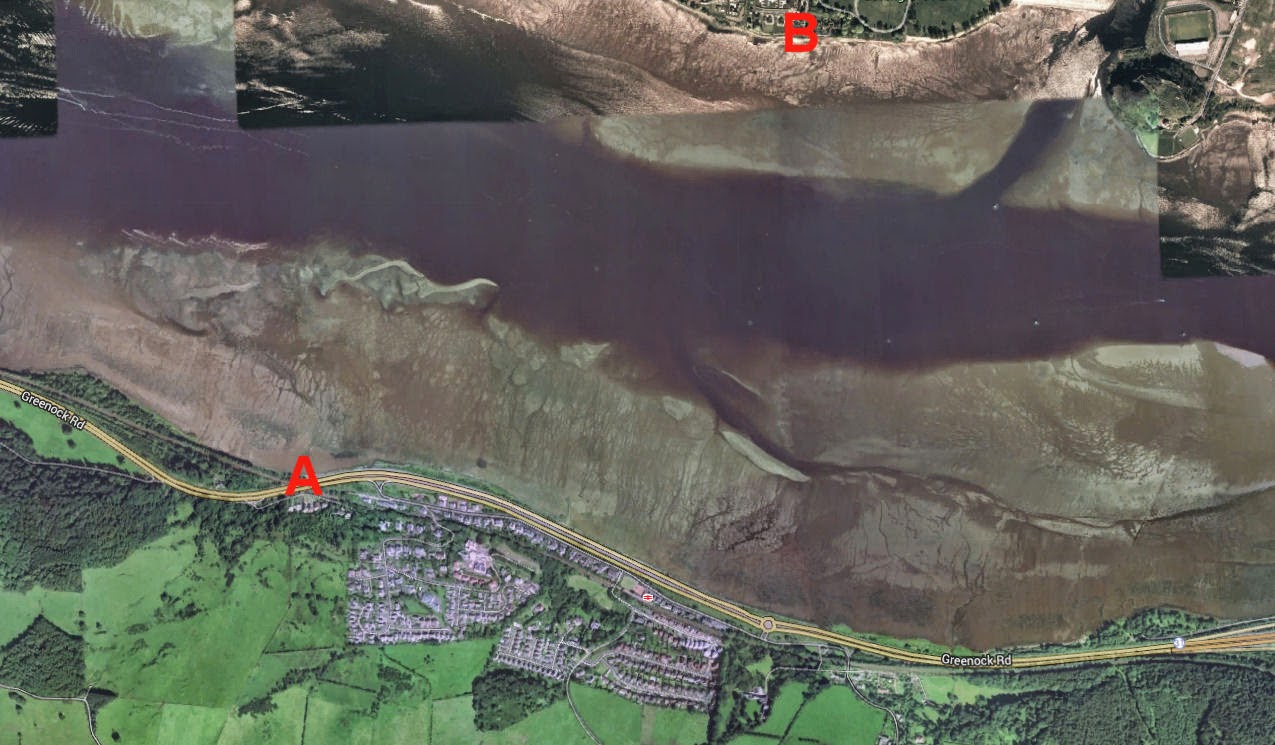 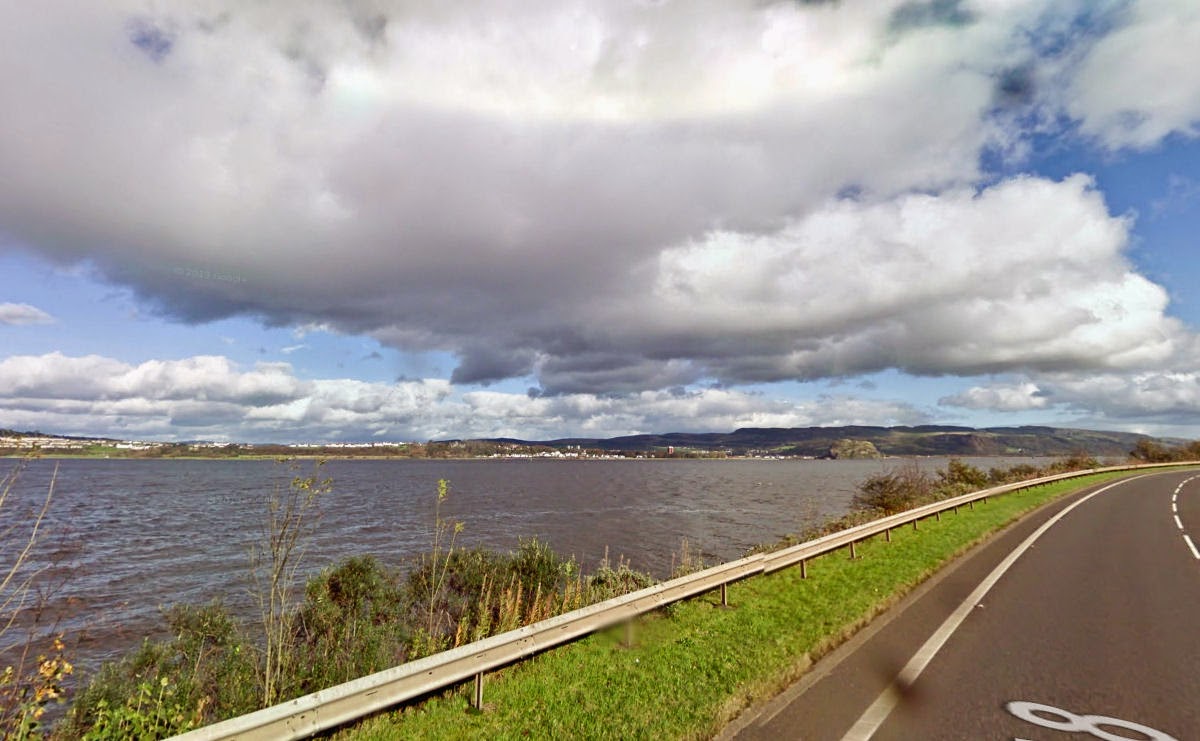 As he got nearer the white light began to flash randomly in no particular pattern, almost like an SOS beacon. Suddenly it disappeared, and a large rectangular shaped object with three white lights along it appeared alongside the quarry. The lights on it were spread out along its length and slowly flashing. He could barely believe what he was looking at and his stomach sank in his chest. He only observed it for between 5-10 seconds while he continued along the road before it went out of sight.

When he got back home he decided to do an internet search for “UFO Dumbarton” and found the report from the 4th on the UFO Info website. He then decided to post his own sighting.

I feel that there are enough similarities between the two incidents to suggest that they were observing the same object within the space of 5 days over the same area. Unfortunately there are certain things which cannot be verified due to the fact that neither witness has got back in touch. However from what we do know it seems clear that this was either a large triangular/rectangular object with several white lights along it. Grant stated that the lights he had seen were constant, whereas when Ian observed it they were flashing. This of course does not mean the two sightings were of different objects, it is possible that on one occasion the UFO was flashing its lights and on the other occasion not for whatever reason.Although no main body of the object was spotted by Grant, the way in which the lights were all moving together and keeping the same distance from one another suggests it was a single object rather than three glowing objects moving in formation.

As both witnesses pointed out, the lights were in the wrong formation to have been those of a helicopter, and no other coloured lights were observed. It could not have been an aircraft as it was moving too slowly, or in the case of the 2nd sighting completely stationary. Due to the distance the lights were being observed from it must have been quite a sizeable object which makes it very unlikely to have been some kind of remote controlled model.

I do hope that one or both of the key witnesses get back in touch with me in due course so further details/drawings can be added to this report. There is also the possibility of other witnesses who are yet to come forward.