In mid August (date not recorded) my girlfriend and I were having a cigarette in the back garden at approx 10.00pm, as we do not smoke in the house as having a 1-year-old daughter. We both noticed out the corner of or eye a huge bright white flash of light followed by a white streak across the sky at a tremendous speed. 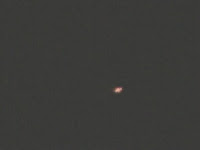 On Saturday 3rd November 2007 at approx 3.00pm a red helicopter came over my house extremely low, I could see the pilot. The helicopter had no markings are numbers on it. It was a small possible 2-seater helicopter; even my 1 ear old daughter came over to the window to see it, as it was extremely loud. I understand this may be just coincidence and not actually related to this experience. A few days prior to this experience I had a strange experience involving a dream that stayed on my mind for 2 days, a strange episode with my daughter and a voice inside me. I will not go into this at this point as it personally involves my family and something about my daughter, but is linked to the event, which I am still finding hard trying to explain to myself. 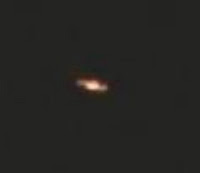 My girlfriend was visiting her grandmother at hospital who is very ill, although related to the experience I won’t explain at this moment. I don’t know by who or how but I was told to “Go outside, it’s time.” I followed this message and went outside through my patio door at the rear of may house. To my amazement I noticed to my left (north) a bright red light travelling towards me. I can only describe the object as square with lots of red lights inside it, just like a modern motorcycle rear light unit. The object was square like a dice, where instead of the dots there were lights. 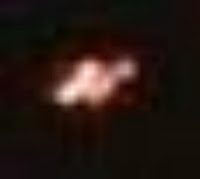 The object travelled from my left hand side (north) towards me, as it was virtually overhead it slowed down dramatically for a few seconds, I ran in the house to get my camcorder and returned to video the object. As I began recording it started to move away heading to me right which is south. As it moved away I noticed it slightly oval shaped and carried on moving until it disappeared into the horizon. The object, whatever angled I looked at it seemed the same, square with lights whilst it was over head. I returned to the house a made a mental note to video the clock to show the time. It was 10.08pm. 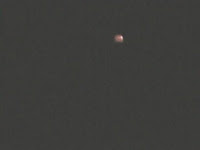 Within a few moments I experienced the same feeling to go outside which I did. Unbelievably the object was back in the same position to my left and repeated the exact same procedure of moving towards me and slowing down. I then returned to the house and made a further recording of the clock 10.14pm. This experience happened another 2 times between 10.20pm and 10.34pm in exactly the same way making it a total of 4 exactly identical sigtings. As you can imagine I was a little amazed and calmed myself down before viewing the footage. 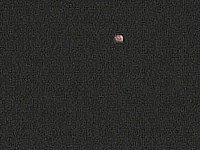 When I viewed the footage I was completely shocked to see I had actually recorded something. It was very clear on the footage that the object was red, had no strobe lights so cannot be a plane or helicopter. The first 2 recordings worked perfectly but I noticed when I played back recordings 3 and 4 that after a few seconds the camera had switched itself off from recording. The camera was working fine when I was using it as I can recall the flashing light on the top telling me it is in record mode but looking at the last 2 footages it somehow decided to stop recording . 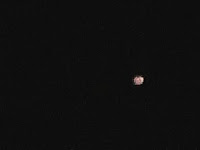 I then checked on the Internet to see if there were any more sightings reported, I typed into the search engine UFO QUINTON BIRMINGHAM and was shocked at what I found. I found a site from a person who had made an animation of a sighting they had witnessed in Birmingham in 1985. The simulation was the exact, and mean exact same object I saw. It was the same size; travelled at the same speed it was unbelievable to have seen the same object 22 years later. 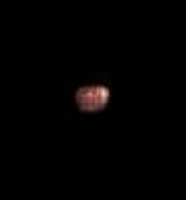 You can view the simulation below:

I have recently sent a message to the owner of this simulation, as it would be nice to hear their experience. I later viewed the footage on my PC as I have a disc with the camera that allows me to put the footage onto DVD, with this I can slow down and zoom in on the sighting. I have a function which allows me take a snap shot of a frame which I have taken several images and pressed the AUTO EQUALISE button, this tries to clear up the image slightly. 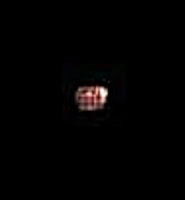 I must state that this is basic software that came with the camera and not of professional standard. If somebody has professional equipment then they probably will be able to get a clearer image from my footage. On several images the object clearly displays a disc shape with a round dome to the top, and the other images, which shows the object when it was closest to me that it is square with lights in it. These images seem to be the eeriest, I think the images are amazing. I hope you find them just as intriguing. 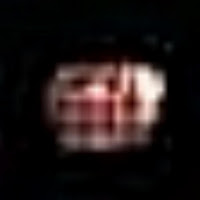 I am writing concerning your Freedom of Information request asking for details of UFO sightings or reports within the UK for the dates 3 November 2007 and 16 June 2007. Your request has been passed to this Department as we are the focal point within the Ministry of Defence for correspondence relating to UFOs.First, it may be helpful if I explain that the Ministry of Defence (MOD) examines any reports of ‘unidentified flying objects’ it receives solely to establish whether what was seen might have some defence significance; namely, whether there is any evidence that the United Kingdom’s airspace might have been compromised by hostile or unauthorised air activity.

Unless there is evidence of at potential threat to the United Kingdom from an external source, and to date no ‘UFO’ report has revealed such evidence, we do not attempt to identify the precise nature of each sighting reported to us. We believe that rational explanations, such as aircraft lights or natural phenomena, could be found for them if resources were diverted for this purpose, but it is not the function of the MOD to provide this kind of aerial identification service. It would be an inappropriate use of defence resources if we were to do so.

With regard to your request asking for information detailing UFO sightings or reports for the dates 16 June and 3 November 2007, the MOD has a website, http://www.mod.uk/DefenceInternet/FreedomofInformation/PublicationScheme, on which reports for this current year will be placed on in January 2008. Therefore, as provided by exemption s.22 (information intended for future publication) of the Freedom of Information Act 2000, the MOD is not obliged to comply with your request. Yours sincerely Mrs ****** Ministry of Defence Directorate of Air Staff - Freedom of Information 15th Floor, Zone HMain Building Whitehall London SW1A 2HB

Regarding your UFO sighting....I think it was a US government R&D'ed alien craft or a ET craft. Most of the time people see shadow government craft but, the pics are cool!.If you'd like me to forward any e-mails to my contacts in high places, then please let me know.

Many Best Regards, WITH HELD (identity with held by request).

What people see is actually ours from the covert projects, the consciousness aspect leads me to believe otherwise. Since you got a conscious override to go out and look, it was most likely friendly ET. When the covert projects use the psychotronics on people it is generally to scare them and thus make them avoid contact with the real ET's, who are generally not bad at all. In this way the covert projects are trying to hold onto control of the topic. If too many people had positive contact experiences and were not suppressed about talking about them (Psychological warfare - psyops, ridicule, discrediting, and if the media were not controlled, then it would be generally known and accepted that we have frequent visitors. With the shift in world view from knowing that we are not the only people in the universe, people might start behaving differently, and the puppet masters of the world would have a harder time controlling us with stupid tricks like fear and ridicule. My first impression is that you had a very good encounter, complete with video and conscious contact. Batteries often drain rapidly in the vicinity of a craft, so you may have run down the battery for the 3rd and 4th events.You seem to have a connection, so I suggest you work on Meditation and consciousness exercises so that you can be more conscious and aware in the future. If you desire contact and work to raise your level of consciousness, you will have contact, and if you set your intentions to only work with those of the highest good, it will be very good contact.