In June 2011 I was contacted by a gentleman who had recently witnessed a UFO from the back garden of his house. He asked his daughter to take a photograph of the object. This report covers the sighting in depth and also contains analysis of the photograph and my thoughts on it.

It was 6.21 pm on the evening of 3rd June 2011. Richard Haller and his wife were lying down on the edge of his daughter’s trampoline in the back garden of their house on Miller Street, Droitwich. His daughter was next to them using the trampoline. It was a sunny evening and they were staring up at the clear blue sky. 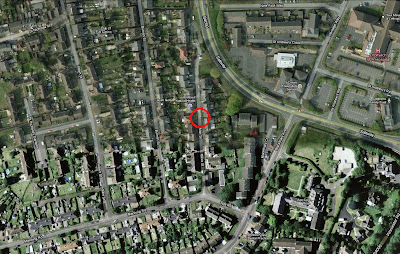 Suddenly Richard noticed an object at high altitude travelling slowly across the sky to his left in a Westerly direction. It appeared to be moving at quite a slow speed. To the naked eye it just looked like a grey coloured dot. It was hard to tell exactly how high the object was or its actual size, but it was at least 1000 feet up.

Richard pointed out the object to his wife and daughter. He then asked his daughter to get her Lumix FZ38 camera. She returned with it to the garden and managed to take two photographs before the object moved out of sight behind a nearby tree. As it moved it seemed to change in brightness, which Richard assumes was down to sunlight reflecting off its surface.

When they checked the photos on playback mode they could not see the object on one of the photos, but were pleased to see that they had captured it on the other. When they zoomed in on it they were quite shocked to see that it was a rounded triangular shape and did not resemble a conventional aircraft. It either had lights on it or was reflecting the sunlight. Later Richard scanned it into the computer to have a better look at what had been captured.

In the following weeks they showed the photograph to various family members, who all agreed that it was certainly unidentified and should be investigated.

Here is the original photograph with the UFO circled, in which the apparent high altitude of the object can be seen: 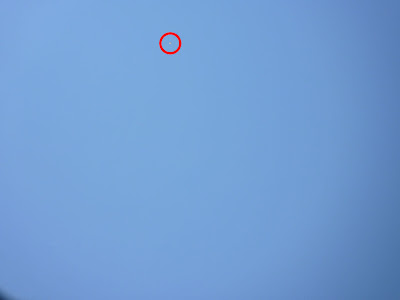 On this zoomed view of the object the rough shape of it can be made out. It appears to be made up of three rounded segments in a roughly triangular shape. It appears to be either pinkish or white in colouration, although this could well be due to the sunlight reflecting off its surface: 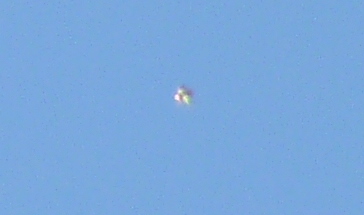 Different contrast views of the object (supplied by the witness): 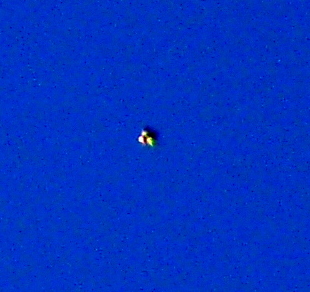 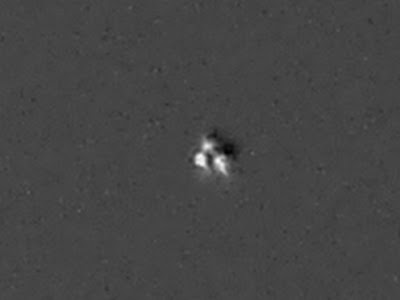 A closer zoom on the UFO: 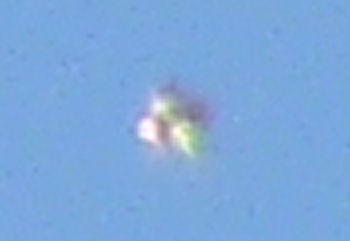 The same close zoom of the UFO with edge find: 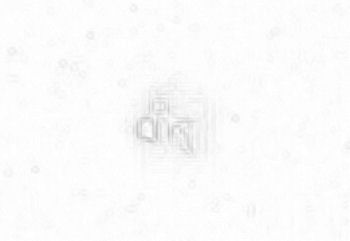 After assessing the case details and the photographic evidence I feel that the object seen was probably a clump of balloons drifting across the early evening sky. From the photograph it can be seen that the object appears to have various curves across its surface, and could well be a number of smaller curved objects crowded together. The object did not perform any manoeuvres which would indicate it was under intelligent control, and was not moving particularly fast so could easily have been drifting in an air current.

The object looks very similar in appearance to the object(s) seen in the skies over Manhattan back in 2010. This incident was widely put down to a launch of balloons, and I see no reason why this case should be any different. Below is a photograph of the Manhattan UFO for comparison: 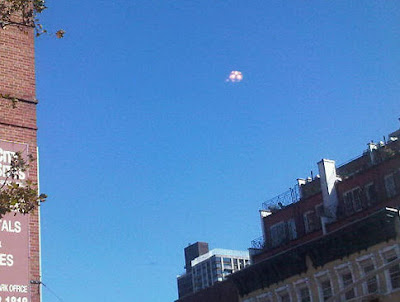 I cannot say 100% that the object Richard's daughter photographed was a group of balloons. There is still the possibility that it was something more unusual, but I feel that balloons are the most likely explanation for what was witnessed.