Kerry and Darren are sister and brother, and are both contactees whose cases I have previously investigated (links at end of this report). On the evening of 2nd June 2013 they, and a number of other witnesses, saw some unidentified black coloured UFOs at two different locations in the Birmingham area. While the two sightings could be completely separate there are a number of similarities which suggest they could have been linked. This report covers both of the sightings in depth and looks into possible explanations.

It was between 9.30-10pm on the evening of 2nd June 2013. Kerry was in her house on Chestnut Drive, Castle Bromwich. Her partner Steve gave her a call and asked her to come outside onto the road. When she did so she found him and his mother Wendy standing outside their home a few doors down. They were staring up into the sky. 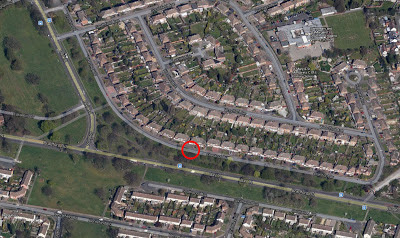 Kerry looked up to where they were staring. It was a pleasant and relatively clear evening, with only light patchy cloud. Due to the time of year it was still light but the sun had started to set. The stars were not yet visible.

Off to their right she noticed some objects in the sky. They appeared to be at very high altitude. They were dark and rounded in shape.  It was hard to tell their size due to the distance. The objects were moving in an unusual way. They were heading in different directions. Two of them at diagonals to one another were moving to the left. A third was travelling upward in a curve in the opposite direction. Behind each object appeared to be a short dark vapour trail.

Photograph of Chestnut Drive in the direction the objects were seen: 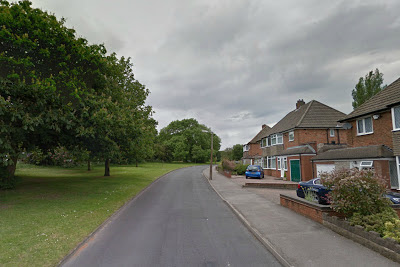 She watched the objects for no more than 10 seconds. They then seemed to fade out quite fast one at a time. Then two further objects came into view again travelling in different directions to one another.

Puzzled by what she was looking at she spoke to Steve and his mother. They had apparently been out there for 10-15 minutes watching the objects appear and disappear. They informed Kerry that some of the objects were rounded in shape while others they had seen were more cigar-shaped. They had watched them travelling in different directions, move then stop and hover for a while, or begin completely still then suddenly start to move away. They felt that the objects were not behaving how either meteorites or randomly drifting objects would naturally behave.

Kerry decided to give her brother Darren in Telford a ring to ask if he could see the same objects. Telford is 40 miles away from Castle Bromwich so this was unlikely, but she decided to ring him regardless. As it happened he was on the phone to his father at the time. He continued to listen to both calls, informing his father what Kerry was saying she could see. Kerry then hung up to go and get some binoculars.

Still on the phone, Darren’s father stepped outside to see if he could see the objects from Hurst Lane, which is within a mile of Chestnut Drive. He said that he was unable to see anything other than a plane on take-off. 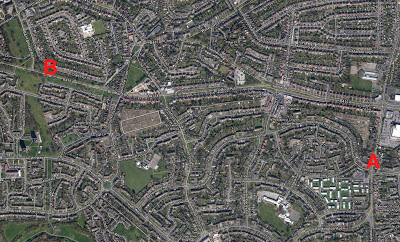 While listening to what his father was saying, Darren walked to the window of his own house on Mercia Drive.  He stared out in the direction of Castle Bromwich to the South East but could not see anything unusual. Then without warning, he suddenly saw two rounded black objects shoot up at a steep angle into the sky above the tree-line. They moved extremely fast and were flying side by side. They were only visible for a few seconds before they vanished without trace. As it was a clear sky there was no explanation for why they would have done this and no sign of any explosions. Each object left behind a trail of slightly curling smoke/vapour. These trails had a gap in them, almost as if  the objects had initiated two separate bursts of propulsion. They remained visible in the air for up to a minute. 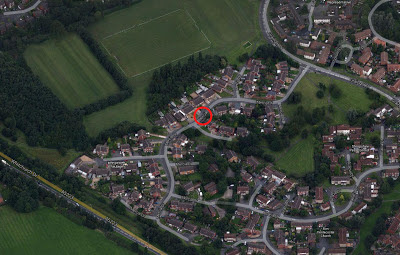 Photograph of Mercia Drive in the direction the two objects were seen: 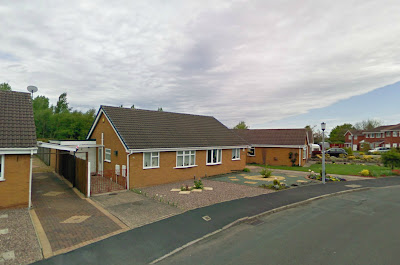 Darren called his partner outside while continuing to scan the sky for the objects. She did not see the UFOs themselves but did see the vapour trails which were still present. Darren then rang his sister to inform her what he had just witnessed.

These are both interesting sightings, and it is amazing that Darren saw something unusual himself in Telford when looking for something his sister was seeing in Castle Bromwich 40 miles away.

Aerial map showing locations the two sightings occurred at, Mercia Drive (A) and Chestnut Drive (B): 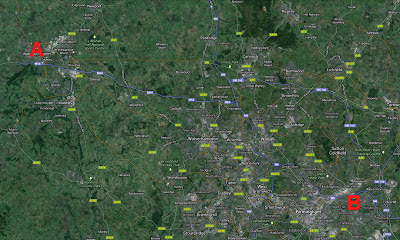 The objects that Kerry reports certainly sound unusual. They caught the eye of not only herself but of her partner and his mother, and all three witnesses were baffled by what they were looking at. The objects could not have been meteorites because of the fact that they were moving in different directions, changing speed and even hovering still for periods of time. They certainly do not sound like helicopters. Balloons or other drifting objects would be the most likely mundane explanation, however the observation of the small trails behind the objects and their movement patterns do not really seem to fit with this either.

The two objects that Darren saw definitely appeared to have taken off from the ground due to the steep angle of flight and the fact they had came from down low behind the tree-line. It is interesting that both he and his sister described seeing dark/black coloured rounded objects which left trails behind them. However the trails left by the objects Darren saw sound much more prominent. They remained in the air for up to a minute after the objects had disappeared, and appeared to indicate that there had been two  bursts of propulsion from whatever the objects were. If they were something man-made launched from the ground then what could they have been? It does not sound like they were fireworks or Darren would have seen or heard the explosion. The objects seemed to rise steeply into the sky and then just vanish. We cannot put out of the question that they were experimental home-made rockets. But even if this was the case then it is odd that there were two of them launched at the same time.

Both the sightings remain an intriguing mystery. I hope to speak to the other witnesses from Chestnut Drive soon, and also may receive drawings from both Kerry and Darren in due course. Keep an eye on this report for any further updates.

As mentioned earlier, both Kerry and Darren are contactees who I have previously investigated. Case reports on their contact experiences can be found in the Contact Cases section of this blog (Shard End Contact Case and West Bromwich Contact Case).