Early morning on 1st November at 12.45am witness Jason B. had a sighting of an unusual light in the sky. He was standing out in his back garden of his house on Liddon Grove, Acocks Green, having a cigarette. There was heavy cloud cover but it was a relatively still and dry night. He happened to glance up into the sky, and a light caught his eye. He saw what looked like a round reddish-orange coloured glowing object. He estimates it was at least the size of a helicopter but could not be certain due to the distance from him, which he estimated at several miles. The object was in the direction of Birmingham Airport and was moving at a slow speed towards his location. 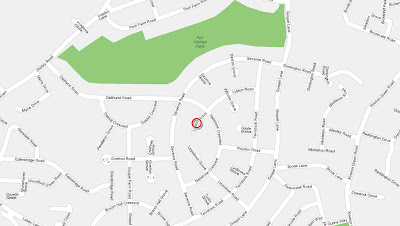 Jason was intrigued by the object and stood and watched it. It first moved from side to side, and then moved in a horseshoe-type shape in an arc towards his position. At first he thought it must be a police helicopter, but as it got closer he realised there was no sound coming from it. After about 30 seconds the object vanished, Jason believes it was probably lost behind cloud. He did not see the object again after this point so went back inside.

I too believe that both myself and some of my friends saw either the same or a very similar object. I was holding a Halloween party and we were out in the back garden of my house in Solihull. I looked up into the sky and saw a glowing orange orb of light that appeared to be occasionally flickering. It was moving at a slow speed in the direction of Acocks Green/Olton, and appeared to be at quite low altitude, possibly 200 feet. I pointed it out to my friends and we watched it for several seconds before it vanished behind nearby housing. I cannot be absolutely certain of the time when we saw the object, but I think it was early morning, so it seems probable that it was the same one that was seen by Jason.

Map showing estimated path of the object I witnessed and locations of both mine and Jason’s sighting: 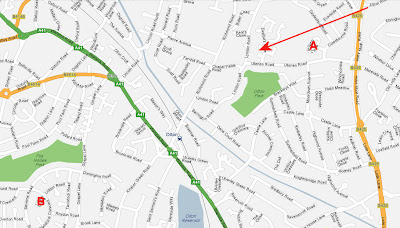 I immediately recognised the object as a Chinese lantern, and this is what I believe both myself and Jason saw. The appearance and movement of the object certainly fits this explanation. Jason believes that the object was too large to be a lantern, however it is often hard to tell the real size and distance of objects in the sky, especially after dark. Lanterns also glow very brightly which again can make them seem larger than they actually are. They can stay lit for up to 45 minutes so this would be easily enough time for it to drift from my location to where Jason was situated.

I am quite convinced that what I saw was a lantern, but obviously cannot be certain that Jason saw the same object, or that what he saw was not something more unusual. However this seems like the most probable explanation for both the sightings. You can see on the map above that the lantern I witnessed was heading roughly in the direction of Liddon Grove, and of course the wind direction could easily have changed. Over recent months we have received many sightings which can probably be attributed to Chinese lanterns. They seem to be particularly popular at the moment, possibly due to Bonfire Night and Christmas being just round the corner.