It was just after the turn of the New Year. Mike Winter was in his house on James Road, Guildford celebrating with his parents. Between 12.30-1am he stepped outside for a cigarette. It was a cold but very clear night. The moon and stars were both fully visible above. He suddenly felt the urge to look up into the sky. To the South East of his position he noticed three red lights in the sky. They appeared to be between 3-5 miles away over the town of Aldershot, and about 3000-4000 feet high. The lights appeared to be completely stationary. 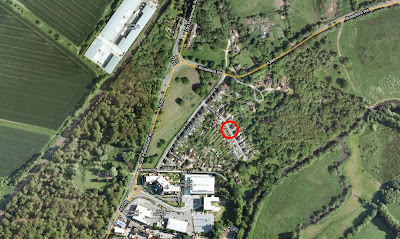 Mike continued to watch the lights, and they did not move at all. He felt that they were definitely something out of the ordinary. After about 10 minutes of staring at them, he called his parents out to come and see them also. They came outside and joined him.

After several minutes, a smaller but brighter white orb of light appeared to the lower right of the red lights and began travelling towards the lower right red light. Its speed was constant and direct, and it looked to be travelling about the same speed as a plane would. When it reached the red light, the red light immediately began moving away to the West at a slow speed. The white light changed its course and began heading towards the second red light. Between 5-10 seconds later the first red light faded out and vanished.

While this was going on Mike looked across the road and noticed that his neighbours were also outside and watching the strange light show. He did not speak with them about it, either at the time or afterwards.

The white orb finally reached the final red light. At this point it seemed to merge into it so only the red light was visible. It began moving away in the same direction as the other lights had, and seconds later vanished from sight. The three witnesses were baffled by what they were watching. Mike believes in UFOs and said to them “See, proof we are not alone”, but his parents were not so sure.

Witness drawing, showing the lights and the movement paths that they took: 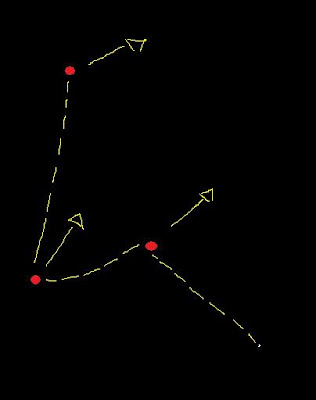 Often I would put such a sighting down to Chinese lanterns or LED balloons. These are especially popular on New Year, and many were launched all around the country. However the sighting should not be dismissed just because of its timing. There are a number of intriguing aspects to it.

The lights were red and apparently remained constantly bright and did not flicker. Most lanterns tend to be more amber in colouration and often (though not always) flicker. The red lights remained stationary for over 10 minutes. This is very interesting as lanterns generally tend to slowly ascend if there is no wind, or drift across the night sky if there is. Even if the movement was quite slow , over such a length of time this should have been obvious, but they appeared completely still.

The small white light is a complete mystery. It suddenly appeared out of nowhere (it was a clear night so it is unlikely to have emerged from a cloud). It then appeared to move with intent towards each red light in turn, and when it reached them they then began to move off one at a time in the same direction before vanishing. This movement pattern seems far too structured to have just been random drifting.

It is unlikely the lights were helicopters as these tend to have other coloured lights on them as well. Neither is it probable that earth lights are the explanation, these tend to only appear in remote locations. There is the possibility that the lights were some kind of celebratory light show using remote controlled lit models or LED balloons. Or perhaps they were just lanterns drifting in air currents creating the appearance of intelligent control. Considering it was just past New Year this is something that must be taken into account, and I feel is probably more likely given the circumstances. But there are certainly elements of the sightings which are hard to explain.