In the summer of 2010 a family from Reddich all had an encounter with a large triangular shaped UFO. In April 2011 the father of the family decided to get in touch with BUFOG to share this experience. This report covers the incident in detail.

It was between 10pm and midnight on a warm clear night in the summer of 2010. The stars were fully visible in the sky overhead. Robert, his wife Julia and sons Tim and Alex were out in the back garden of their house on Lime Tree Crescent. Suddenly Alex spotted something up in the sky. He pointed at it and asked “What’s that?” 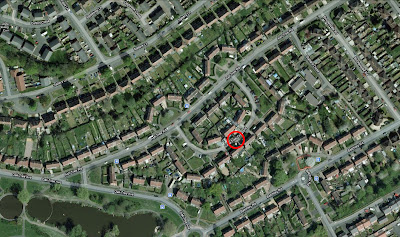 The family all looked up and were amazed to see a large black triangular shaped object. It was quite low down, about 50 feet up, and had appeared over the roofs of neighbouring houses on Ash Tree Road, North of their position. It looked to be quite big in size, at least 30 feet across. There were no visible markings on the surface of the object it just looked completely black. At the front of it were three white lights - one at the front point and one either side of it. The object appeared quite flattened but due to the angle it was hard to tell the depth of it accurately.

The object was moving slowly, moving at between 10-20 mph, and travelling on a straight and level course. It was completely silent. It approached them and flew right over their heads. As it did, it blocked out the stars in the sky above. Once it was past it was no longer very visible as there were no lights on the rear of the object. The object headed off in the direction of Reddich town centre.

The family realised that it wasn't a normal aircraft of any kind due to the shape and the lighting on it. They did not tell anyone else about the incident afterwards as they felt they wouldn't be believed anyway.

This is a stunning sighting of what was probably a Flying Triangle craft. The object seems too large to have been a model or inflatable of some kind. It could not have been mistaken identity of a military craft such as a stealth bomber. It was completely triangular in shape, was moving too slowly to have been this, the lighting configuration was unlike any known aircraft, and was also completely silent. At the low altitude the object was seen at the family would have been able to hear the noise of jet engines if there was any. Could it have been a secret military aircraft of some kind? Again this seems very unlikely, why would they fly such a craft over a highly populated town at low altitude?

The lighting seen on the object was quite unusual. Usually Flying Triangles are seen to have a light at each corner and a larger central light, or have small lights all around the edges. But this craft had several lights at the front, and none elsewhere on it. I am not sure whether I have heard of any FT sightings with this lighting before, I certainly haven’t investigated any personally. However there are a large variety of ET craft, in much the same way that we have a large variety of aircraft. And perhaps the craft had some of its lights switched off at the time for whatever reason, this is always a possibility.

The fact that the whole family saw the object means it was clearly a solid object of some kind. It is possible that there were other witnesses to this FT as it was moving slowly at low altitude over the town. If you believe you too may have seen it please get in touch.