In March 2011 Julie Symes got in touch with me via Richard Hall’s website to let me know the details of an interesting sighting that she and her son Geraint had between 1999 and 2001. In speaking with her via E-Mail it became apparent that the family have had had several other UFO sightings as well. This report covers each of these sightings in detail.

In the summer of 1975 Julie’s husband Martyn (who was 21 at the time) and his friend Mark were on holiday near Stackpole Quay, Wales. They were camping near to the Pembrokeshire Coastal Path. In the evening they went out to a local pub for a meal, about half a mile from where they had pitched the tent. It was a pleasant and still evening. On the way back they were walking past some fields when they noticed a white orb of light hovering over a field off to their right. It was quite dark by this time so the light stood out. 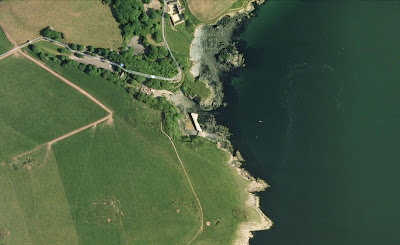 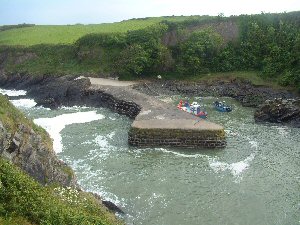 The orb appeared to be about the size of a football. It was glowing but not bright enough to light up the surroundings. It appeared to be about 3 feet off the ground and hovering over the hedge at the far side of the field. It was completely stationary when they first noticed it. It was odd but they decided not to attempt to approach it. They began walking again and noticed that the orb was now following them. When they stopped it stopped, when they moved it also moved! They tried running, and stopping suddenly. But the orb kept pace with them whatever they did! It always did this instantaneously.

Martyn and Mark stared at the object for 5 minutes trying to work out what it was. After this time they became nervous of the object and so ran back to the tent without looking at it again. Safely back in the tent they then both discussed what they had seen. In the years following this sighting, Martyn apparently learned that there had been other similar sightings in the area.

This is a fascinating sighting due to the fact the object appeared to be mimicking the witnesses movements. They are certain that it was actually moving and not just a distant light which was stationary. It was in land so could not have been a ships light out to sea. The instant movements it performed, combined with the fact that it was right over a hedge means it cannot have been someone playing with a torch trying to frighten the men. Martyn says that if it was a torch it would have cast light and shadows on the ground but there was nothing like this. It appeared to be a glowing sphere or object which was under intelligent control and for whatever reason was copying the movements of the witnesses.

On an evening in July 1995, the family were on their way home from Alton Towers theme park. It was about 6pm, and the weather was dry but cloudy. The family were on holiday and staying at a nearby caravan park. Unfortunately Julie cannot remember the exact name and location of this park. Martyn was driving, Julie was in the passenger seat and Geraint, who was 8 years old at the time, was on the back seat behind Julie. Geraint's sister was sat behind Martyn.

As the car approached the entrance of the caravan park, Julie and Geraint spotted something strange out of the car windows. There was a metallic object hovering just behind some nearby fir trees. It seemed to be rotating and was about 10-12 feet in diameter. Looking back at the incident, Julie and Geraint remember the shape of the object differently. Geraint remembers seeing a chrome coloured sphere. Julie remembers it being more disc shaped with a raised dome in the middle. The object was only visible for a moment before it descended downwards and was lost from sight behind the trees.

Drawing by Geraint showing his view of the UFO out of the car window, and the direction in which it moved: 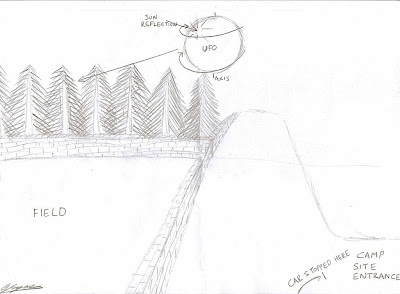 Drawing by Geraint giving an overhead view of the sighting location, showing the position of the UFO and of the car: 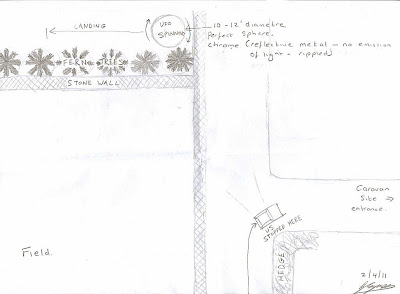 Discrepancies can sometimes occur with multiple witness sightings, so the fact the two witnesses remembered the object being a different shape is not really an issue. The object appeared too large to have been an inflatable of some kind, and it certainly did not appear to be any kind of conventional aircraft.

It was mid afternoon on a bright sunny day in either late July or early August. The sky was mostly clear with only sporadic white clouds. There was a breeze blowing. Geraint, who between 12-14 years old at the time, was just setting off on his bike from home on Goitre Coed Road, Quakers Yard Treharris to travel round a friend’s house. Julie was standing on the front doorstep of the house telling him to watch out for traffic. The house has steps leading up to the front door, so Geraint was looking up at her. It was then that he noticed an object hovering in the sky over the house. He told his mother to look and she stepped outside to see what he was looking at. 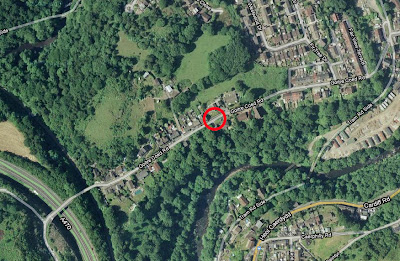 There about 100 feet high above them was a perfectly spherical silver ball. The sunlight was reflecting off its surface. The object was about the size of a large football. It was moving in a Westerly direction at a slow and steady speed. Julie noted that it appeared very controlled; it was not wobbling or changing speed at all as it went. They were both fascinated and puzzled by it, but not frightened. They agreed that it did not look like a balloon as it was a windy day but it was not bobbing around in the air. Julie said to Geraint “Smile, you’re on alien camera!” She says that for some reason she felt irritated that it was spying on them, but felt no danger from it. She did not think to run and get her camera; she was too busy watching the object.

They both watched the sphere for several minutes until it had vanished from sight to the West of them.

A short while later Julie rang the MOD and left a message on their answer phone reporting the object. She felt that it was ET in origin and that it should be logged. She never had a reply from them. Out of interest, she does mention that three days later a fast fighter jet flew at low altitude over the house heading to the South. This was the only time this had ever happened, before or since.

This is an interesting sighting due to the appearance and movement of the object. Football-sized silver spheres are one of the more commonly reported types of UFO. Obviously some of these sightings will turn out to be nothing more than silver coloured balloons. However this does not appear to have been a balloon. It was a breezy day and ye the object was able to travel on a straight and level path for several minutes without changing speed or altitude. This sounds far too controlled to have been a balloon given the weather conditions at the time. The object had no visible means of propulsion or lift, and was also completely silent, so I find it unlikely that it was a radio controlled model or military drone. Perhaps the sphere really was observing them, or perhaps it was just passing by when they happened to catch sight of it, we are unlikely to ever know for sure.

It was 3pm on an afternoon in December 2010. Geraint was out driving on the A472 south of Quakers Yard with his girlfriend. It was a bright but cloudy day. As they approached an island, the couple suddenly noticed a glowing silver coloured spherical object in the sky to the North West. The object was clearly lower than the cloud layer and emitting light. They pulled off to the side of the road and got out of the car to continue watching the object.

Aerial map showing the location of the UFO (A) and witnesses (B): 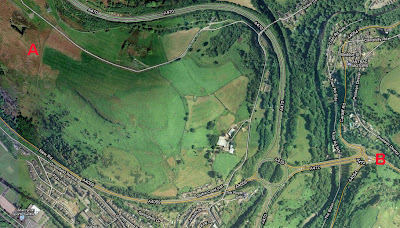 Photograph of the sighting location in the direction the UFO was seen in: 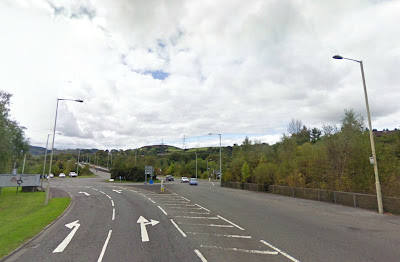 The witnesses watched the UFO for about 10 minutes. It remained stationary for a time, then slowly began to ascend. It then stopped moving and once more remained still. They watched it for a while longer before deciding to continue on their way as it was quite a cold day. It is unknown how long it remained in the area for.

Again this is an interesting sighting. It seems unlikely that the object was a silver coloured balloon. The object seemed to be emitting light. As it was a cloudy day it is unlikely that this was caused by sunlight reflecting off the object, unless there was a break in the clouds. However the movement that the object performed seems too controlled for it to have been a balloon. It hovered completely still for a number of minutes, a balloon would surely have drifted in this amount of time. It is unlikely the object was a helicopter, even at a distance it is possible to make out the rough shape. We cannot rule out a strange remote controlled model in this instance, but this explanation sounds quite unlikely.

I have investigated other cases of brightly glowing silver spheres. A recent case that comes to mind is the stunning multiple witness Blackmill sighting of July 1991 (available to read elsewhere in this blog).

The Symes family have had a number of very interesting UFO sightings, some of which displayed clearly controlled manoeuvres. They appear to have just been in the right place at the right time, I do not feel that the evidence currently points towards direct interaction from these objects. Hopefully they will keep in touch in case of any future sightings they may have.