In mid April 2011 Steve, a 28 year old from Richmond in Virginia, got in touch with me via Richard Hall’s website about an encounter he had with a Grey ET being during the previous month, and another unusual experience which had happened afterwards. He does not remember any unusual experiences earlier in his life, but he now appears to have experienced contact. This report will cover both of his current experiences.

On 10th February 2011, Steve was asleep in bed alongside his girlfriend Natalie, in his apartment on West Grace Street, Richmond. In the early hours of the morning, he awoke with the distinct feeling that something was not right, and sensed strange pulsing vibrations running through him, almost like energy on the surface of his skin. He did not immediately open his eyes, but just listened for anything in the room. 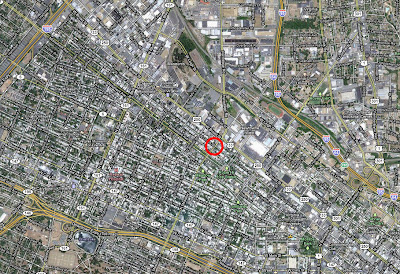 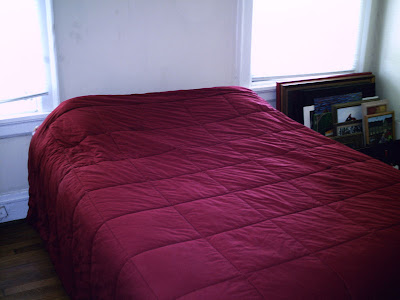 The feeling of vibrations began to get stronger so he opened his eyes. It was still dark outside but nearby street lighting means that his room is lit in a dull orange glow even with the curtains drawn. He immediately saw a Grey over by the door to his room near the base of the bed.

Photograph of the bedroom doorway: 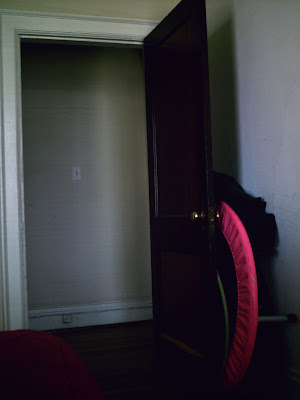 The being was standing still and looking at him. It stood about 4 feet in height. It was wearing a tight black single piece suit which went up to the base of the neck. Its hands were uncovered. It had an oversized rounded head and thin neck. Its eyes were large, slightly slanted and wrapped around its head. They were completely black in colour. There was no nostrils or mouth visible. Its skin was smooth and silvery in the light entering the room.

Witness drawing of the Grey: 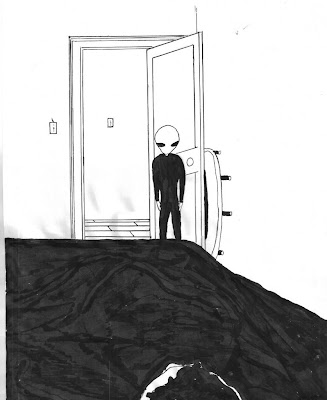 Steve knew of the UFO and ET subject and recognised the being as a Grey. He was extremely startled by its presence. Before he even had time to get frightened or react, it quickly walked across the room alongside the bed, reached down and put its hand on the top of his head. The being walked in a similar manner to a human, it did not sway its arms very much. As it put its hand on him, he felt a pulse of energy and seemed to black out for a brief moment.

When he came round he found that the Grey had vanished. He checked the clock in the room and saw that it was 4.00 am. His adrenaline now kicked in and he became fearful of what had just taken place. It was more the surprise rather than a fear of the being itself. He felt that the Grey had been observing him and Natalie, and that it had not expected him to wake up.

As he looked round he also noticed that Natalie was moving around next to him. He asked her "You ok?" She informed him she had just had a really freaky dream. However rather than then tell her about what had just happened, Steve instead pulled the covers up near to his face and rolled over so he was facing away from where the Grey had been. He put his arm over Natalie and lay there thinking about the Grey. Steve has no idea why he did not get up or tell her about what he had seen. After a while he calmed down and then managed to drop off to sleep.

In the morning, Steve remembered the incident and was certain that he had been awake and not just dreaming. He and Natalie then drove out to buy some Indian food. Steve says that they are both usually very chatty with each other, but that morning were very quiet. Eventually Steve told Natalie about what he had seen. She then proceeded to tell him about a strange dream she had been having, seemingly at the same time. In this dream she was standing in a large crowd and staring up at a UFO. Nobody else seemed to have noticed it, so she pointed up at it. As she did this, the craft flew directly at her, turned into an owl and landed on her head. When it did this she felt vibrations running through her and realised that she could not move. At this point she woke up and found that she could still feel these vibrations and was still unable to move for a short while.

In the days following the incident, Steve became very frightened to go to bed at night as he remembered what had taken place. This fear slowly subsided but he still often thinks about the being he saw. He is unaware of whether there was any missing time with the experience, though I feel it is certainly possible that he was taken, and had the memories of this experience blocked out. Contact experiences usually start with a direct visitation by one or more ETs. The way that it put its hand on his head has been reported before on numerous occasions. It is certainly possible that when he felt the bolt of energy surge through him he blacked out and this is when he was abducted. This would explain why when he came round, seemingly a moment later, the Grey was no longer present in the room.

Another sign that he was abducted is what happened to Natalie. It seems far too much of a coincidence that she was dreaming of UFOs at the time of Steve’s encounter. The way in which the craft turned into an owl is interesting. The Greys often use what is known as a screen memory to mask their true appearance. This is probably done to reduce the fear of the individual, so it is something they recognise. They will often choose an animal form for this, and on numerous occasions have appeared in the form of a white owl.

The fact that Natalie found she could not move and felt vibrations through her body, and then woke up still feeling these sensations fits in with her being temporarily shut down by the ET so it could go about its business. This has been noted many times before. The ETs have a way of shutting down others in the vicinity, probably so that they will not witness what is happening or attempt to stop it. There is even the possibility that she was taken before Steve or at the same time as him, but again has no recollection of what took place. If Natalie really was taken, perhaps the aspects of her dream had been brought on by what occurred. She is certain that she has not actually been at the place from her dream, so it is unlikely that her dream was actually direct memories.

Lifting Sensation and the Orb

On 18th March, about five weeks after his visitation, Steve had another strange experience. He remembers waking up about 5.30am to feel the sensation that he was being pulled upward out of his bed by an unseen force. His arms were outstretched upwards and he felt like he was being lifted off the bed. He again felt the same vibrational feeling as he had done prior to seeing the Grey. Once again Natalie was next to him. She had her arm on him, and woke up to feel Steve's body vibrating very fast. She also could hear him grunting.

Steve fought against the sensation as much as possible, moving his arms around and saying "No!" over and over again in his head. After several seconds the feeling suddenly ceased. Steve then opened his eyes.

However his arms still felt very strange. Steve describes the feeling as “like they had a strong magnet rubbed all over them, like the iron in my blood was pulled near the top surface of my skin”. He says this sensation was very different to just pins and needles caused by him holding his arms up into the air, and is hard to explain. This feeling lasted for between 4-6 minutes before slowly subsiding, by which point he had got up out of bed.

Steve then went to the bathroom. Natalie was annoyed that he had woken her up, and told him that he had kept her up in the night. He replied to her "At least you're not trying to be taken".

Could this have been another attempted abduction, one that Steve was not supposed to know anything about? Or perhaps it was his body remembering what had happened previously and acting it out of its own accord. After all there was no Grey being seen during this incident, just the sensation. It is of course possible that this was nothing to do with contact, and was down to something else entirely such as sleep paralysis. But considering his previous experience with the ET, I feel it is more likely to have been related.

Steve and Natalie decided to not bother trying to get back to sleep, and instead got up and went for an early morning breakfast. Over breakfast they discussed what happened and Natalie suggested that Steve should not try to fight being taken.

They came back home about 10am and decided to take a nap together. Again Steve woke up with the same vibrational feeling running through him. This time he decided not to fight it. He rolled over away from Natalie, and could feel that the vibrations seemed much more powerful on the surface of his chest. As it was now mid-morning and the blinds on the window were open, it was fully bright in the room. He stared up at the ceiling.

There is an air vent above the bedroom doorway. Suddenly Steve noticed a strange shaped ball near the vent. It was clear but appeared to have angular prisms inside it which were a purple colour. It was not completely round, but was nearly spherical. It was moving through the air like a bubble. As he watched, the orb seemed to shrink in on itself until it vanished.

Photograph of the air vent: 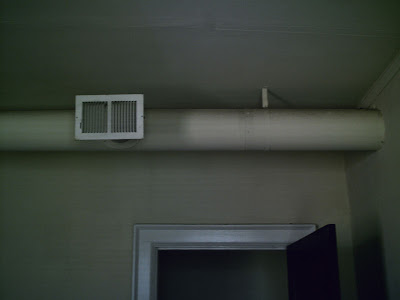 At this point he could still feel the vibrations on his skin. He turned away and faced the window and looked out towards the sky. Then suddenly the vibrations stopped completely. Steve says that this experience was awesome, and that he felt he had complete control, there was no fear involved with it.

Many contactees have reported seeing orbs of energy in their proximity, either with their own eyes or caught on photographs or video. There does seem to be some kind of link between contact and these orbs. It is possible that they are ET energy of some kind manifesting itself in that manner. Or are the orbs related more to ghostly phenomena, and due to heightened sensitivity the contactee can pick up on these or cause them to occur?

The Grey that Steve saw in February 2011, and how it interacted with him, does seem to suggest that he may be an abductee, but that he is currently unaware of anything else that took place. There is also the possibility that Natalie has also been abducted, although she has not yet had any direct interaction with ET beings, at least to her knowledge. I have recommended hypnotic regression to Steve as a possible means of finding out whether anything else did take place after the Grey put its hand on his head. Unfortunately as he lives in the US I am unable to arrange this regression myself, he would have to go to a local hypnotherapist.

Are these incidents to be everything that Steve experiences, or will he have further experiences going forward It is hard to say either way. Providing he stays in touch I may be kept informed of other things which take place.