Occasionally at BUFOG we get contacted by witnesses from much further afield than the area of Birmingham. Recently the contactee from the Bletchley Contact Case (report available elsewhere on this site) put details of his sighting on a website. Pat Clements from Michigan USA read the article and decided to get back to him with details of his own past UFO sightings to offer support. The man from Bletchley forwarded Pat my details and soon afterwards Pat contacted me by E-Mail to describe his impressive sightings. The two incidents will each be covered separately in this report, but as they took place in such a short space of time, there is the possibility that they were related.

It should also be noted that two other sightings occurred in Sudbury, Ontario within a month of these sightings. Due to the fact that Ontario is the state just North of Michigan there is a possibility that these sightings are also related. You can find links to reports on these other sightings towards the end of this report.

There is no question that this sighting was extremely impressive, and certainly seemed to show a physical craft of unknown origins. Pat believes the sighting took place on a Friday or Saturday night in the early part of October 1965. It was a clear night, the stars were visible and it was also very still. Pat (who was 15 at the time), his friend Rick Blackwood, his brother Greg and Greg’s girlfriend Maureen Phoenix (Ages 15-17) were driving along Pontiac Trail in Northfield Township, Washtenaw. Greg was driving, and Pat and Rick were on the back seat. They were heading south towards the fairground in Saline, for a sponsored dance for teenagers. They drove past German Park on the way to Ann Arbor. Both Pat and Rick needed to relieve themselves so Greg pulled up at the side of the road. Pat and Rick got out and walked back about 75 feet behind the car where Maureen would not be able to see them. They were facing the car when suddenly Rick exclaimed “What is that over the car?” Looking into the sky, both witnesses saw a huge “classic” flying saucer shaped craft. It was matt black in colour and against the night sky, which was why they had not spotted it sooner. It was stationary and completely silent, just hanging in the air above the car. Pat knew the area well and was able to estimate the size of the craft at 75 feet across. He estimates it was about 100 feet high above the car. 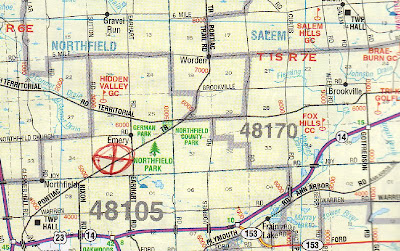 In describing the craft, Pat says “It had beautiful lines to it and reminded me of a French curve in the way it seemed to flow together, absolutely breath-taking. The outer rim had a row of rectangular sequential blinking lights firing off in succession as if it was moving, it is possible it was transmitting data to the inner part of the human brain, I certainly absorbed the flashing lights.” 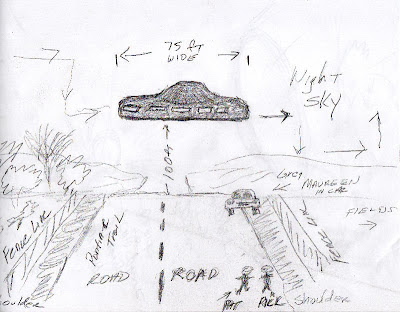 After several minutes, the craft began to move away to their right at over 200mph. As it did so it moved in a sharp zigzagging pattern, making 90 degree turns without slowing down at all. Pat is a licensed pilot and says that there is no way a human would be able to withstand such sharp movements due to the G force exerted on them. As they watched, they called out to Greg and Maureen who then also saw the craft. It continued to make several more 90 degree turns before suddenly accelerating straight upwards at an incredible speed. The bottom of the craft turned a brilliant white as it burned through the atmosphere. No sonic boom was heard, and before long the craft was completely out of sight. In his last glimpses of it, he thought that from underneath the craft looked similar to the old ECHO spacecraft that was launched in the early 1960s. 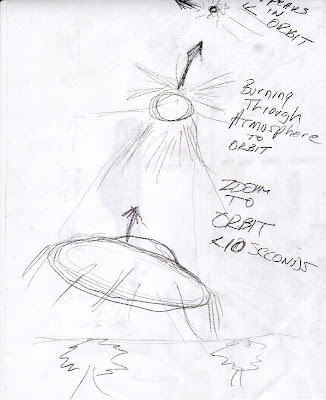 Pat found out later that Frank Mannor, the son of a local farmer, claimed to have seen the craft land in a nearby field. I am currently trying to get in contact with him about the incident, so this report may well be updated.

Due to its appearance, size, and movement patterns, this incident was almost certainly a genuine sighting of an intelligently controlled craft. Pat and the other witnesses are convinced that it was extraterrestrial rather than a top secret military craft due to the incredible manoeuvres it pulled off. Apart from the fact that no alien entities were seen, it does seem to tick all the boxes. Whatever it was, it appears that it was interested in the witnesses, and was hovering directly over their car for a number of minutes. The object is obviously much too large, and performed too complex manoeuvres to have been a radio controlled object; therefore out of all the cases I have looked into so far, this is one of the most impressive. It is a shame that none of the witnesses had a camera on them at the time, or else we may have had some fantastic evidence of the incident.

Two weeks after the first sighting, Pat once again saw something completely out of the ordinary! He was at his home in Brighton. His father would often work evening shift, and when he left the house his mother would on many occasions get paranoid that someone was outside the house, so would go to check at the back door. It was about 7pm in the evening when suddenly his mum started to scream for him to come and see. He found her standing at the back door looking up into the sky and acting quite hysterical. When Pat looked outside he could see a ball of white light in the sky off to the West. They both went outside to get a better view of it. The object was massively growing in size to about the size of the sun in the sky, and then shrinking back down to the size of a star. Pat believes it was actually moving towards and away from them rather than remaining stationary and physically changing. It was making no sound at all. 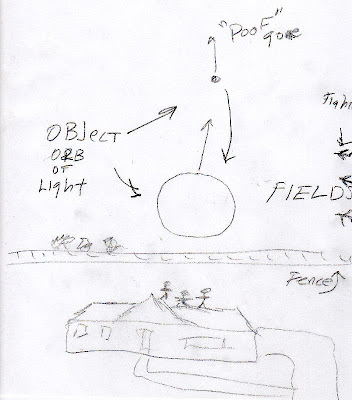 They watched it for a couple of minutes highly confused as to what they were looking at, before Pat decided to contact the Michigan state police. He informed them of what they could see but the police treated it as a prank call so he got irritated and hung up. He and his mother continued to watch the object, which was still performing the same manoeuvres in the sky. Several minutes went by and Pat’s sister Lori also came outside and saw the object. Suddenly a full squadron of jets in formation appeared in the distance coming from Selfridge Air Force Base. They were obviously flying to intercept the UFO. As they approached it, suddenly the object shot away almost instantly. The jets broke formation and headed off in different directions in disarray. At no point throughout the sighting did Pat feel threatened by the object; he was only really awestruck by it.

This is a fascinating sighting of an extremly unusual object. It appears that the object was a craft of some kind, and the fact it flew away extremely fast when the jets arrived also backs up this theory. It is unlikely that the jets would have even been sent out unless it was something out of the ordinary. Although the object had a very different appearance to the previous sighting, there is certainly a possibility that it was related in some way. Perhaps the object was sent on purpose to “check up” on Pat, and this is the reason it was seen in close proximity of his home. It does seem like too much of a coincidence that the sightings happened within two weeks of each other, unless he was just extremely lucky to have two close encounters within the same month. Like the first sighting the manoeuvres displayed by the object looked intelligent and deliberate, although Pat has no idea why the object appeared to be moving towards and then retreating from them or was changing size continuously. This is quite bizarre but also tends to disprove the theory that the object was something mundane such as a balloon. Due to the time of year it was also dark so the object appeared to be lit up and glowing white.

Pat wonders if what was witnessed was not a physical craft, but rather something spiritual in nature, such as a sphere of energy. However the object must have been visible to everyone or else the jets would not have been sent to intercept it. It would be interesting to know whether or not the object showed up on their radar. It is obvious that people at the air force base knew about the presence of the object, and perhaps also knew why it was there. However, nothing official reporting the object has ever been released. If possible, I may be able to contact the base to ask them for details regarding the incident; I will let you know if there are any further developments.

As mentioned in the introduction of this report, I have on separate occasions been sent details of two other impressive sightings which occurred in Sudbury, Ontario in September and October 1965. Although the objects described were different, it is possible the sightings are still related. There are seperate case reports on these incidents.