Ralph Little often enjoys to sit out under the stars and watch the night sky. Around 9.45pm on a clear evening in June or July of 2007 he was doing precisely this, sitting out in the garden of his house on North Promenade, Withernsea, Yorkshire. It was a pleasant evening, warm and with a very light breeze blowing. The stars and moon were visible. The sun’s fading light could still be seen to the North West.

Aerial map of North Promenade showing the location of the witness: 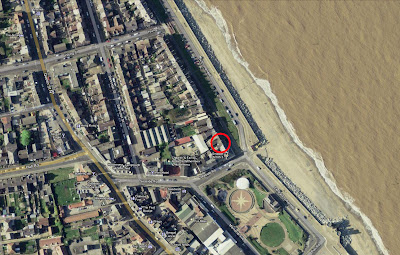 Ralph is experienced in looking at the night sky and so knows what is normal to see and what is out of the ordinary. He watched a satellite cross the night sky, heading in a Northern direction. As it faded away into the distance he looked back to where it had come from and noticed another object which again appeared to be a satellite. He again followed it across the sky.

As it began to move away to the North, something very bizarre happened. Suddenly it appeared that a bright electric blue light emerged from the rear of the object. It then immediately shot away at an incredible speed, banking off to the right as it went! It was lost from sight within several seconds, and moved so fast that the glow from it appeared as a light streak. 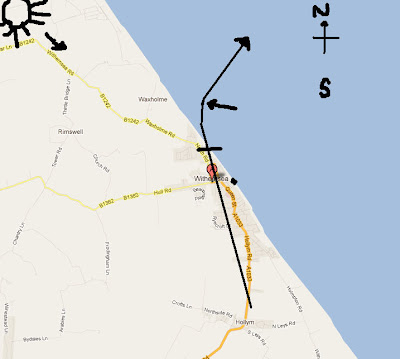 Ralph had certainly never seen anything like it before. He was absolutely stunned. He knew that the object could not have been anything conventional. In his opinion it must have been one of two things. It was either an unknown spacecraft of Earth origin, possibly something developed in secret, or it was a genuine advanced craft of extraterrestrial origin.

This is a very impressive sighting for a number of reasons. The witness was used to looking at the night sky so would easily be able to recognise meteorites, satellites, the International Space Station or other things seen on a regular basis. Due to the appearance of the object it certainly seems that it was up in space, though there is the possibility it was at very high altitude in the atmosphere. The fact it was initially moving at the speed of a satellite means it cannot have been a meteorite. Sometimes the suns rays can catch satellites and space debris, causing them to become extremely bright. This could possibly explain the sudden flash of light, but the incredible speed the object then moved off at shows that it was under powered control and not just an object drifting in orbit.

After looking at the evidence available, I would have to agree with Ralph – this was probably either an experimental human-made spacecraft or an ET craft. It is of course impossible to say which, however if it was ours then it clearly had the ability to accelerate and move extremely rapidly. ET craft certainly possess these capabilities, as has been proved through countless sighting reports. So you may feel, as I do, that this was more likely to have been theirs than ours.