On the evening of 28th January 2011, Andrew Crossley was out walking his dog in his home town of Barrowford. It was a clear and still night but was very cold. The stars and moon were fully visible. It was 9.25pm and he had just reached the junction between Bedford Street and Richmond Street. He turned around to momentarily glance behind him, and was surprised to see two bright orange glowing orbs of light in the sky. It was hard to judge how high they were but did not appear to be at low altitude. It was also too hard to tell exactly how far away and therefore how large they were.

Aerial map showing approximate position the witness was at: 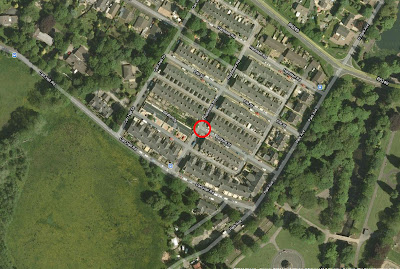 The objects appeared to be following alongside one another, at most 50 yards apart. They were travelling in a South Westerly direction. Andrew thought that they may be Chinese lanterns, however unlike lanterns he had seen on previous occasions they did not appear to be flickering. They travelled over the roofs of the houses and then out over fields on the outskirts of the town.

Photograph of the sighting location in the direction the objects were seen: 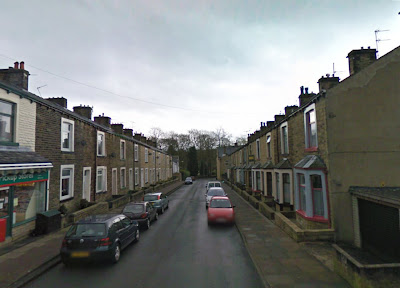 Andrew watched the objects for 2-3 minutes. He was both confused and mesmerised by the objects. They were travelling towards Pendle Hill when suddenly they appeared to split and head off in different directions extremely fast. They were only visible for several seconds before they went out of sight. The speed which they moved at seemed much too fast for the objects to have been lanterns, and they looked like they were under direct control.

Many aspects of this sighting do suggest that the objects were probably Chinese lanterns. These appear as round orange orbs of light at a distance just as the witness describes. Although the do often noticeably flicker in brightness, sometimes they can appear constantly bright. The fact that the objects were both moving across the sky on a straight course one after the other fits in with lanterns caught in an air current.

The way in which the objects headed off in different directions suddenly and apparently at very fast speed is an interesting aspect of this case, and could suggest that they were something much more unusual. However it is possible for lanterns to get caught in two different air currents and veer off in different directions. As the witness could not tell how far away they were, he had no way of knowing exactly how fast they were moving. Perhaps they were a lot closer and moving much slower than they appeared to be. There is even a chance that they went out which could have given the illusion that they shot away at speed. Considering the evidence available I feel that the most likely explanation for this sighting was Chinese lanterns, although this is not a definite.