The majority of sightings that are reported to the group typically describe spherical, disc-shaped or triangular objects. However sometimes objects of a more unusual shape are also reported. This report covers one such sighting by a highly credible witness – a 49 year old retire police constable named Ian Sawyer. Ian lives in Blackley, North Manchester, and used to be part of the South Yorkshire police force. Several days before Christmas 2009 he had a very unusual sighting which prompted him to get in touch with BUFOG.

It was 8.38pm on the evening of 22nd December 2009, and a very clear, still and cold night. There was very little cloud cover and the stars and moon were fully visible. It had been snowing earlier in the day, there was about 3 inches of snow covering the ground. Ian was sitting in his lounge at the computer and having an internet chat with a friend on Yahoo Messenger. The lounge window runs directly behind his computer. The view from the window overlooks the old Booth Hall Children’s Hospital site on Charlestown Road.

Suddenly an orange glowing light caught his eye, and he glanced out of the window to see where it was coming from. He immediately caught sight of a very strange large glowing object in the night sky. The object was the shape of a widened crucifix lying sideways, and was glowing a fiery orange colour. At first Ian assumed it was an aeroplane on fire, but then realised it couldn’t be due to it’s shape and size. It had very defined straight edges and appeared as a single solid object. Ian estimates it was 3 or 4 times the size of a jumbo jet. He believed it was situated over a wooded area in the local vicinity, and at least a couple of thousand feet high. The object was moving extremely fast, hundreds of miles an hour, faster than a military jet would fly at. It was on a level flight path heading to the North in the direction of Middleton.

Witness drawing of the UFO with notes: 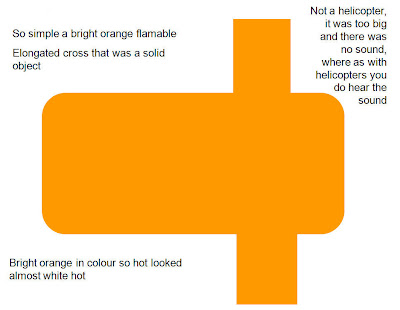 When Ian first sighted the object it was about a 3rd of the way across the view from his lounge window. Due to the speed of the object it was only a couple of seconds before he had completely lost sight of it off to the left of the window. He immediately thought about grabbing his camera but then remembered that the batteries were flat. Because the object was moving so fast it is unlikely he would have had time to photograph it anyway. He moved to the right to get a different view through the window but the object had completely vanished from sight. 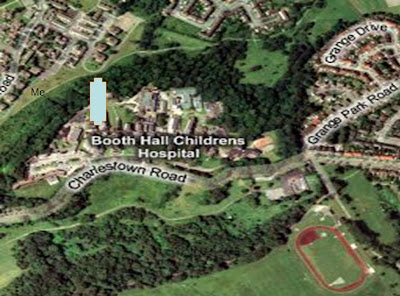 Ian returned to his internet chat and decided to tell his friend about what he had just seen. Here is the automatically saved log from the chat:

That night Ian had a very bad nights sleep. He was not consciously thinking about the object but believes his sighting may have been the cause. He checked on the news the following day to see if anything was reported which would explain what he had seen but there was nothing. He considered various things which it could have been – amber light reflection from a road gritter or street lights, helicopter lights, atmospheric phenomena – but nothing seemed to fit. Ian is completely mystified by the object, and wonders if anyone else may have also seen it.

This is a very interesting sighting indeed and has a number of intriguing aspects. The shape of the object seen was highly unusual and one that we have never had reported before. Most usual explanations can be discounted because of the objects appearance and its apparent speed.

It did not look anything like a conventional aircraft or helicopter. The nearest airport to where Ian lives is Ringway airport, but this is 14.5 miles North of his position. Due to his previous employment in the police, Ian is very familiar with normal aircraft types and how they appear after dark. The shape was like nothing he had ever seen before, and also the object appeared much too big to be a conventional aircraft.

If we consider a moment that the object was actually smaller and closer than how it appeared to be, we can then look at other possibilities. Could the object have been a strange shaped lantern or inflatable? The glowing colour of the object is consistent with Chinese lanterns, however I feel this highly unlikely. Lanterns are usually cylindrical or round in shape. We must also consider the speed at which the object was moving. It was a completely still night, Ian was sure of this fact because the trees in his back garden were not moving at all. For an object to be drifting on a level course at speed, there would need to have been a strong wind blowing. Lanterns also tend to flicker in brightness, but for the brief time that Ian saw the object it remained constantly bright.

Due to the bizarre shape and speed I also feel it is unlikely to have been a model of some kind. It is also highly unlikely to have a natural cause, such as a meteorite or earth light. Could the object have been a highly unusual secret military craft? This is unlikely because of the highly unusual appearance, and it seems unlikely that it would be flown over a highly populated city such as Manchester. The nearest military base is Formby, Liverpool, and it is the only base within an hour of his location.

After considering the various alternative possibilities, this case remains a true mystery. There is certainly a chance it was a genuine sighting of an extraterrestrial craft. It was a clear night so perhaps there are other witnesses yet to come forward. However it was also very cold, so most people would probably have been indoors. If you believe you may have seen the object, please get in touch with BUFOG.

I have contacted the MOD through Freedom Of Information to see if they had any aircraft in the area at the time of Ian’s sighting. I sent the following request:

“I wish to enquire as to whether you had any aircraft flying in the area of Blackley, North Manchester, over or near to the Booth Hall Children's Hospital site, at approximately 8.38pm on 22nd December 2009. If not, were you aware of any or did you detect any on radar?”

I received a response from the MOD on 21st January:

MOD low flying policy gives guidance to pilots to plan their flight routes to avoid overflying major towns with populations over 10,000 people. Consequently, with the combination of the busy civil controlled airspace associated with Manchester Airport and the guidelines for low flying, it is deemed unlikely that any MOD aircraft was operating in the area yopu stated at the time given.

The MOD operates over 840 fixed-wing aircraft and over 470 helicopters operating from well over fifty flying Stations around the United Kingdom. The only way to fully confirm whether a military aircraft was operating over Blackley at 8.38pm on 22 December 2009 would be to get every single Station to retrieve and review the individual flight plans for every single aircraft in the MOD. I think you will appreciate that to undertake this detailed review would divert many personnel from operational business and would not be a good use of defense resources.

As stated above, all aircraft operating in the Blackley area would have been in contact with Manchester civilian Air Traffic Control. You may wish to direct your request to NATS Plc, the civilian air traffic organisation, or Manchester airport.

I hope that this information is useful."

On 21st September 2009, a man reported seeing an unusual object at Newton St Cyres near Exeter. He managed to photograph the object through his telescope: 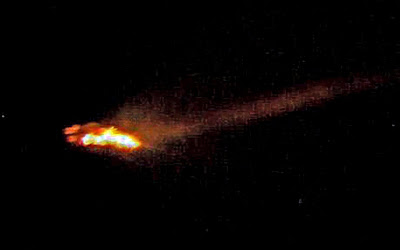 Ian says the appearance and colour of the object are similar to what he saw, although in this case it appears from the photograph to be a glowing object with a long trail behind it, where as the object that Ian saw had clearly defined straight edges. Due to this discrepancy, I am not convinced it is the same object, though its similarities cannot be ignored.

Here is an article from The Telegraph about the sighting:

Lee Betts, 29, spotted the glowing red shape hovering 1,000ft up in the night sky from his bedroom window. The object moved across the sky for more than an hour on Monday evening before shooting off into the distance.

Mr Betts, of Newton St Cyres near Exeter, said he watched the unidentified object through a telescope before taking the pictures at 9pm. He said: ''I couldn't believe it at first. The shape was about 100ft long and there were four lights coming from it initially. The shape moved slowly and it seemed to pivot on a central axis. Then, without warning, a sudden flash of light like a shooting star went across the sky. It was very strange. I have been an amateur astronomer for the past three years and I've never seen anything like it before. It's unexplained.''

A police spokesman said they had not received any reports of a UFO sighting in Devon.

Below is a link to a report by Billy Booth on numerous sightings of a glowing cross-shaped UFO back in 1967. Coincidentaly the initial witnesses were also police officers: