On the morning of Tuesday 20th October 2015, Neil was working in the garden of his cottage which lies between Henley-In-Arden and Claverdon, Warwickshire. It was a bright sunny morning with very little cloud in the sky. It was approximately 9.30am when he heard a loud whooshing noise which he initially thought was coming from the neighbour’s garden. As the sound increased in volume he realised it was coming from the sky. Looking up into the section of sky visible between the trees either side of the avenue he observed a very peculiar shaped object.

Aerial map showing the route between Henley-In-Arden (A) and Claverdon (B):

It appeared to be between 8-10 feet in length and either silver or white in colour. It was made up of cylindrical tubes. There appeared to be bright white lights flashing on and off randomly on the underside of the object. There was no visible means of propulsion, propellers or trail. 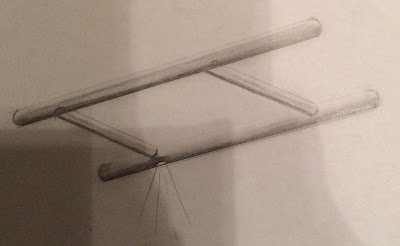 The UFO appeared to be at a height of about 150-200 feet. The UFO was travelling to the East on a level and straight course about 40-50 mph. It remained at the same angle without any rotation. Neil observed the object for about 10-15 seconds before it vanished from sight behind the trees. He tried to move position to continue watching it, but could not find anywhere suitable. He was baffled by what he had just witnessed.

Later on Neil told several members of his family about the sighting, who had varying degrees of scepticism towards it. He rang the local police to see if they had received any other reports about the object but they informed him they had not. The police suggested he should ring the Civil Aviation Authority, which he did. They were unable to provide any explanation to what he may have seen. He also checked on the news to see if anyone else had seen it but nothing was mentioned.

The shape of the object seen in this sighting is very unusual indeed, and I have not dealt with any previous reports of something exactly this shape before. It was clearly not any normal type of aircraft or military drone. The most likely mundane explanations for the object would be an unusual inflatable or solar airship. It is possible that the white lights the witness saw on the base of the object were in fact the bright sunlight catching it, although Neil feels certain they were lights not reflections. The object was certainly small enough to be an inflatable. Solar airships are usually larger than the apparent size of the object, are a single black-coloured cylinder, but perhaps it was an unusual novelty shape or even home-made. Also it was a bright sunny morning, ideal conditions for launching such an object.

However there are a number of issues with these explanations. Firstly if it was an inflatable/solar airship it is very unlikely it would have been making any audible sound. Also if it was drifting on an air current you would expect there to be some rotation in the object as it moved, yet the witness says it was not turning at all, and appeared to be under controlled flight.

If it was not an inflatable or solar airship then what could it have been? Due to the size and apparent size of the object it is very unlikely it was manned, but there is a possibility it was some kind of radio controlled model. Or could it have been an automated drone, perhaps of non-human origin? It is unlikely we will ever know for sure.