It was the evening of Friday 20th March 2009. The two witnesses to this sighting, Kerry and Matt (Names changed for privacy reasons), were at their home in Sutton Coldfield. It was 10.00pm and Kerry had just sat down to watch some TV. Their lounge window looks out to the road outside. It is ¾ covered in a blind, but through the uncovered section Kerry noticed an unusual moving light. Intrigued, she went to the front door and also called her husband Matt.

It was a clear and still night, and the stars were visible. In the sky behind the houses on the opposite side of the road and off to their right, they saw what looked like a glowing sphere of very bright white light, which faded to orange light on the outer edge. It looked like a solid orb-shaped object rather than just a light with a glow around it. It was hard to judge how far away it was from them but it was certainly within a mile. They estimated it was between 60-100 feet high. The object was moving at least the speed of an aeroplane and from their perspective was moving to the left across the night sky on a very straight course. They could hear no sound coming from it.

The witnesses watched it cross the sky for about 30 seconds. It was then hidden by a tall fir tree in their front garden, but they could still see the light from it through the branches. The object re-emerged and then suddenly turned at 90 degrees and began moving away from their position. They watched it get smaller due to distance, and within 10 seconds it had completely vanished from sight. 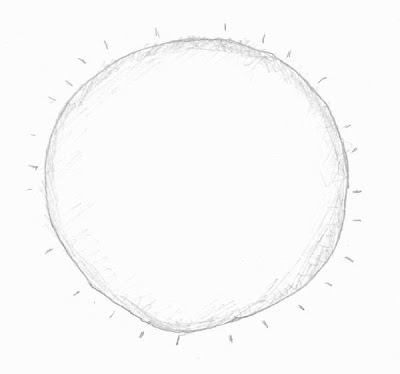 There are a number of impressive aspects to this sighting. Firstly the witnesses are certain that what they saw was not a Chinese lantern. They lived in Thailand for a number of years, and regularly saw lanterns in the sky. They have even lit and launched some themselves. The object seen was too bright, too spherical and did not flicker at all. Its trajectory looked far too controlled and fast to be a balloon and it did not appear to be drifting. Also why would a balloon have a constant bright white light in the first place? Hot air balloons glow orange and only intermittently. However, the fact that it performed a sudden right angle turn in still weather conditions suggests that it was under intelligent control. The description given does not fit in with any other explanations such as a meteorite or earth light. The witnesses are convinced that what they saw was some kind of unidentified craft rather than a conventional object. It is currently unknown whether anyone else saw the object, but it would have certainly stood out against the night sky.