It is not often that I get contacted by someone with a military background about something they encountered while in service. Military cases often have a certain aura of believability about them. This is due to the fact that most military personnel are trained observers and are familiar with conventional aircraft. Also they are often sworn to secrecy, meaning that they have more to lose than a normal civilian if they come forward with information.

In June 2011 I was contacted by a man who used to be an airman in the Royal Air Force and was stationed at RAF Leeming. Because he was no longer in the RAF he decided it was time to come forward with information regarding a UFO which he and his unit witnessed during or around 1988, when he was 17 years old.

It was about 10.30pm and a clear night with only light cloud. Grant (real name undisclosed) was on patrol with his Mobile Reaction Force (MRF) unit. This patrol would entail driving around the base in a Land Rover, mostly looking for IRA or undercover journalists trying to expose security breaches.

They were at the South end of the runway. Suddenly one of Grants colleagues noticed two unusual flashing lights in the sky. He exclaimed "What the fuck is that?!" which of course got the attention of everyone else. The lights were yellow-orange in colour and seemed to be pulsing. They appeared to be about 30 feet apart from one another, and looked quite large in size. As it was dark it is unknown whether they were two separate objects or two lights on a single object. There were 5 people in the unit and all of them clearly saw these lights, which were completely stationary in the sky. 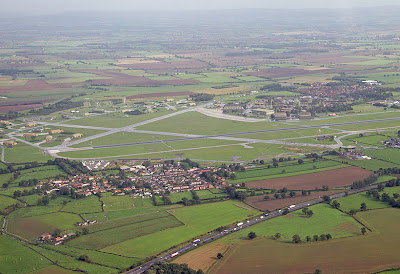 The lights appeared to be hovering over the Air Traffic Control tower, 3/4 of a mile North of their position, although Grant suspects this was just their own perception. They observed the lights for several minutes both from aboard and outside the Land Rover. After this they then moved to a better vantage point past the aircraft safety net. Grant's colleagues then contacted Air Traffic Control, but they said that they could not see the lights, nor was anything showing up on radar. 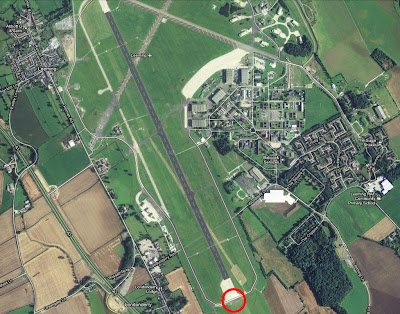 After the initial radio communication with Air Traffic Control, the batteries ran out. After having a cigarette they decided to drive to ATC to get some new batteries so that they could contact OiC to discuss the lights.