On the evening of 19th December 2008 between 7.30-8pm numerous witnesses observed many glowing orbs of light in the skies over Halesowen. The objects were moving in roughly the same direction, some individual, some in groups. Many were convinced that they were watching a fleet of extraterrestrial craft. It was a clear night so the objects were easily noticeable against the dark sky. Below are several photographs taken at the time: 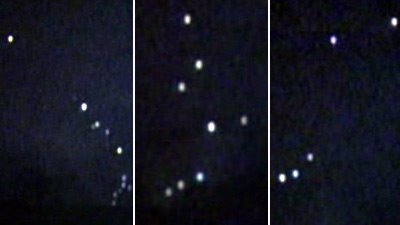 Witness Steve Randall who lives in Halesowen was interviewed by Sky News and said “This was incredible and so spectacular. The lights seemed to climb into the sky to the North of us, just before 8pm. A neighbour had shouted for us to come and look. There were so many objects. From a distance they looked like bubbles rising in a fizzy drink. Then they came towards us and flew right over the top. Some were so close they were almost touching and were only a hundred feet or so above us. The objects were absolutely silent and travelling at probably twice the speed of a normal aircraft. They were all circular and had 13 to 15 lights around the rim. Each had lights in the centre which were flashing on and off. They went south at a terrific speed.” When asked whether the objects could have been aircraft he said “Aircraft are not allowed to fly over this area. We regularly see air traffic in the distance and I can assure you that this was something very different.”

Among the witnesses was one of the members of BUFOG. He spotted the objects near Junction 3 of the M5 motorway looking eastwards. He said the ligts were moving slowly in the same direction as the wind. Every so often one of the lights would fizzle out and disappear. He saw around thirty at first but by the time he had got his camera there were only about six to eight still visible. He managed to take several photographs including the one below: 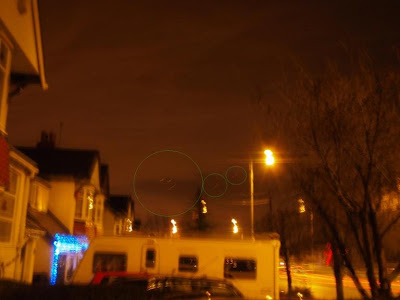 Another witness contacted BUFOG via the forum to say that he had seen “around thirty glowing orbs and oval-shaped objects, some stationary and some moving at speed”. The witness did not know what the objects could be but said they were too low in the sky to be stars. He saw them from the area of Harbourne, which is east of Halesowen.

By the afternoon of the following day an explanation for what was seen had been found. And sadly this time there was no extraterrestrial connection. The lights seen were Chinese Lanterns that had been launched after a Christmas carol service by children from Lutley Primary School. The lanterns were apparenly on sale after the service for £2.50. Many parents and children decided to buy them and set them off all together from the playground at 7.30pm. One of the parents, Sam Gibson, was interviewed by the Sunday Mercury about the incident. She said “There were certainly no UFOs around that night – just the 50 lanterns that the parents and children decided to set off over Halesowen. We all watched them float off into the night sky towards the fire station. It was really nice and I was thinking of investing in some more for the children.”

Case closed it seems. Just as with numerous other sightings of glowing lights in the sky, this incident turned out to be lanterns. Even though Chinese Lanterns have been around for several years now, they are still rare enough for a lot of the public to not know about. Hopefully over time people will become more aware of what these lanterns look like when launched after dark. Unlike many of the other sightings reported around Birmingham over 2008, we can safely say that this mystery has been solved.