Most sightings reported to BUFOG are from around the UK. But occasionally we receive a sighting in from further afield. This report covers a very interesting UFO sighting which took place in Pakistan in 2005.

It was 9.12pm on the evening of 19th September 2005. Khalid Latif and his uncle Sardar Mumtaz Hussain were sitting and talking out on the large balcony of his uncle’s house in Rawalakot, Azad Kashmir, Pakistan. Other family members were inside the house at the time. The house is located on a mountain range, offering a fantastic view in all directions. It was a clear evening and the sun had set so the moon and stars were fully visible in the sky.

Suddenly out of nowhere, a massive glowing white oval shaped object appeared in the sky to the North West West. The object was so bright that it immediately caught the attention of both the witnesses. They were both completely stunned by the appearance of the object. There were no visible markings. It appeared to be quite large in size, Khalid estimates about the size of a football pitch. It was hard to judge the exact height of the object, but it was at quite low altitude, about the height a helicopter would fly at.

Drawing of the UFO. Khalid says that the actual object was glowing much brighter: 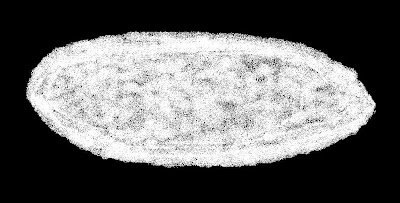 The UFO was over some mountains with sporadic housing on the outskirts of Rawalakot. It was moving to the West at a slow speed, and also very slowly gaining in altitude. Khalid wanted to call one of his other uncles to also come and see the object, but to do so he would have to have moved from his position and this is something he was not willing to do at the time, he was mesmerized by the object. 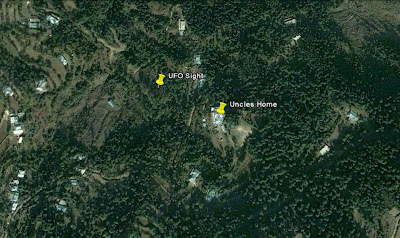 After 15 seconds the object began to fade in brightness then suddenly “switched off” and completely vanished. After it had gone, both witnesses discussed what they had just seen. It was so unlike anything they had seen before they could not come up with any reasoning which could explain it. Khalid sensed a degree of fear coming from his uncle. At the back of his mind he knew about the UFO phenomenon and thought that this is what the object could have been. Both the witnesses told the rest of the family about what they’d seen. They were curious at first but could not relate to the experience so soon forgot about it.

This is a very impressive sighting with numerous interesting aspects to it. Most of the usual alternative explanations can be disregarded in this particular case. The appearance of the object was nothing like any conventional aircraft, and it also appeared to be much too large. The fact that the object suddenly appeared out of nowhere, and then disappeared without trace was impressive. It was a clear night so there is no chance that the object simply appeared from behind some cloud and then was hidden behind cloud again. It was too high off the ground to be hidden behind something else such as nearby mountains, and if it was this would have been more obvious. The object was much too large to have been a model of some kind and is unlikely to have been an earth light due to the oval shape and brightness.

Could it have been a large balloon/inflatable of some kind, perhaps an LED blimp? Could the witnesses have been mistaken about the actual size of the object? This is a possibility to consider, but I find it very hard to believe that an LED blimp was in the skies over Pakistan back in 2005, they are still relatively new technology. Also an LED blimp would generally be continuously lit or would flash on and off. If this were the explanation then the light inside would have to have been radio controlled, and the owner would have just lit it up randomly before switching it back off, a very unlikely possibility. Also Khalid said that the object appeared instantly but when it vanished, it at first faded gradually before switching off. If it was an electronic light that was being turned on and off, it would have vanished just as fast that it appeared. The unlit object may well have still have been visible, blocking out the stars, but this was not the case. It was as if the object had completely vanished from the area or had made itself invisible.

I feel that in this particular instance, the most likely explanation for the object is that it was a genuine advanced craft, probably of extraterrestrial origin. The sighting certainly made a lasting impression with the witnesses. It is possible that something so bright was seen by others in the area who have yet to come forward. Or perhaps they have actually spoken with other more local investigators who we are not currently aware of. If you have any further information about this incident, be sure to get in touch.