Note: For reasons of anonymity pseudonyms have been used

It was the afternoon of 17th February 2014, between 1-5pm. Julia was at the office studio where she works in Risør, Norway. Her work colleague David was also present. It was a slightly overcast day but was very still. Julia suddenly noticed a strange object in the distance out of the office window. To the South South West she saw what appeared to be a brightly glowing white coloured cigar-shaped object. It seemed to be at least 2 km from her location and at high altitude, at least as high as an aeroplane would fly at. The UFO was shining brightly, possibly due to sunlight reflecting off its surface. It appeared to be much larger than a passenger aircraft. It was moving to the left across the sky on a level course at roughly the same speed as a helicopter would fly at.

Julia immediately grabbed hold of her iPAD and leaned out of the window to take some photographs of the object. She managed to take 4 photographs over the space of 60-90 seconds before the object vanished behind the peak of Risør Peninsula.

Strangely when looking back at the event later on she did not recall having seen the object from the office window. She remembered being outside the building and observing it. It was only when she checked the angle of the photographs taken that she realised they had been taken from the window. 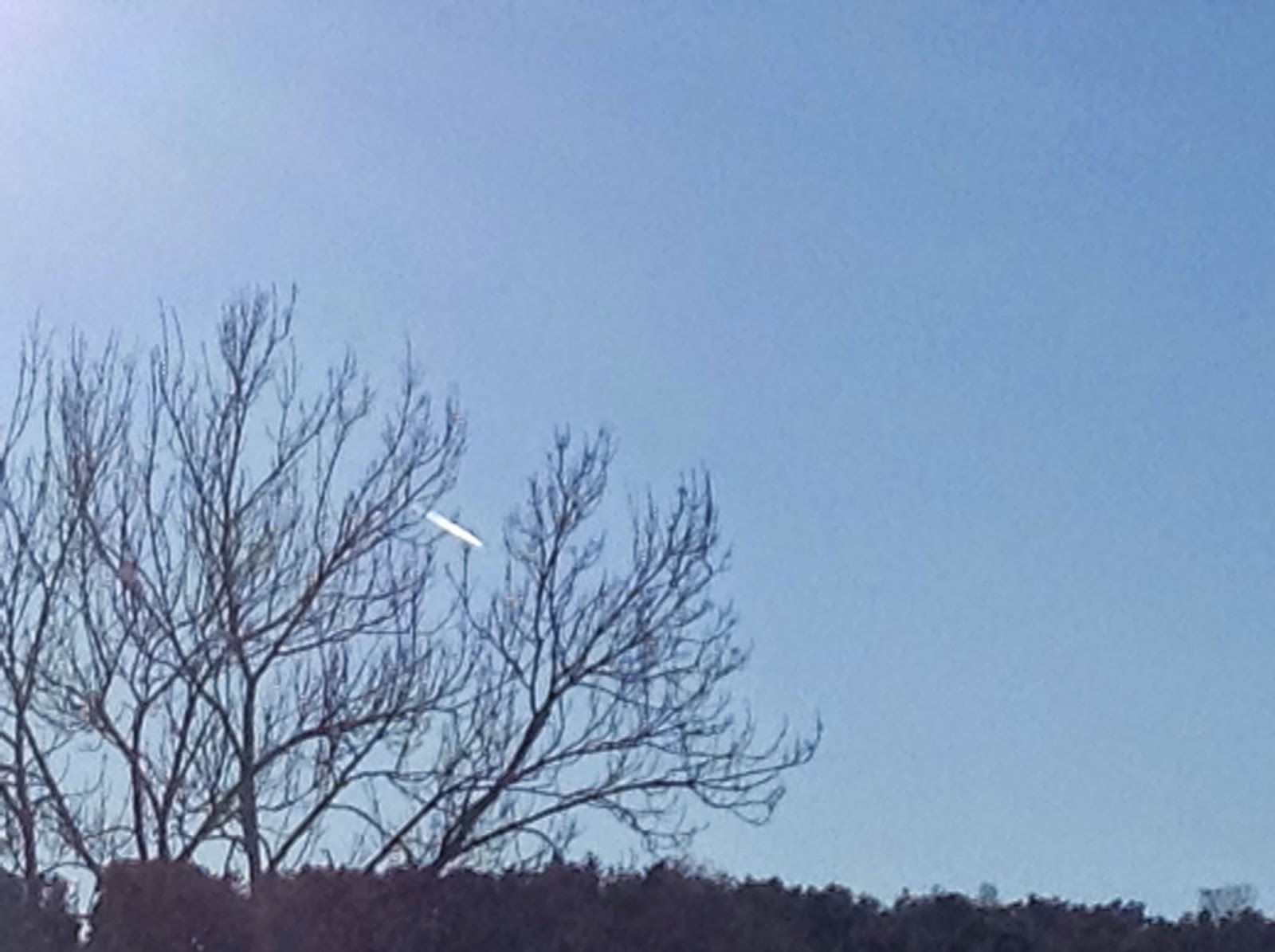 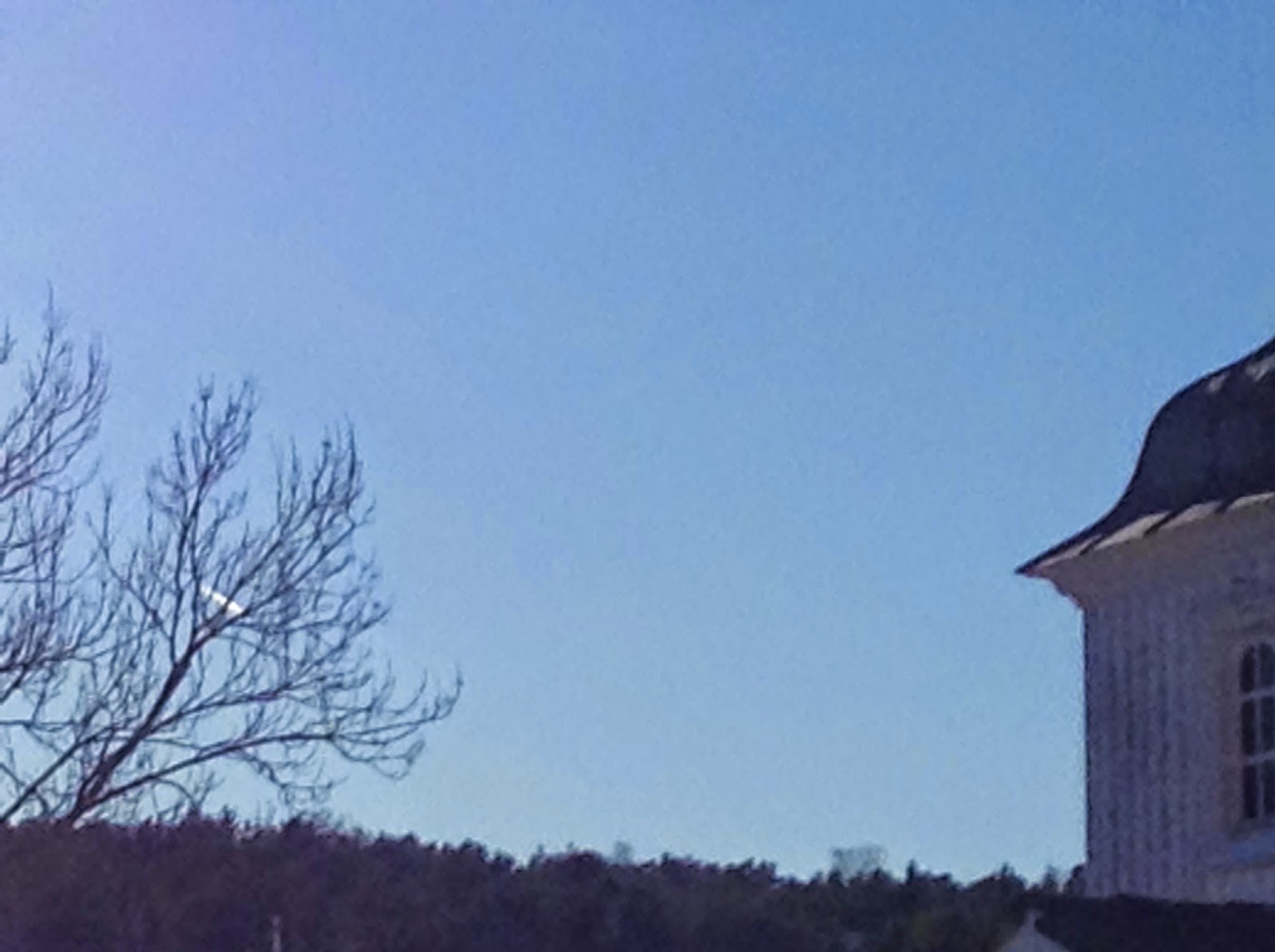 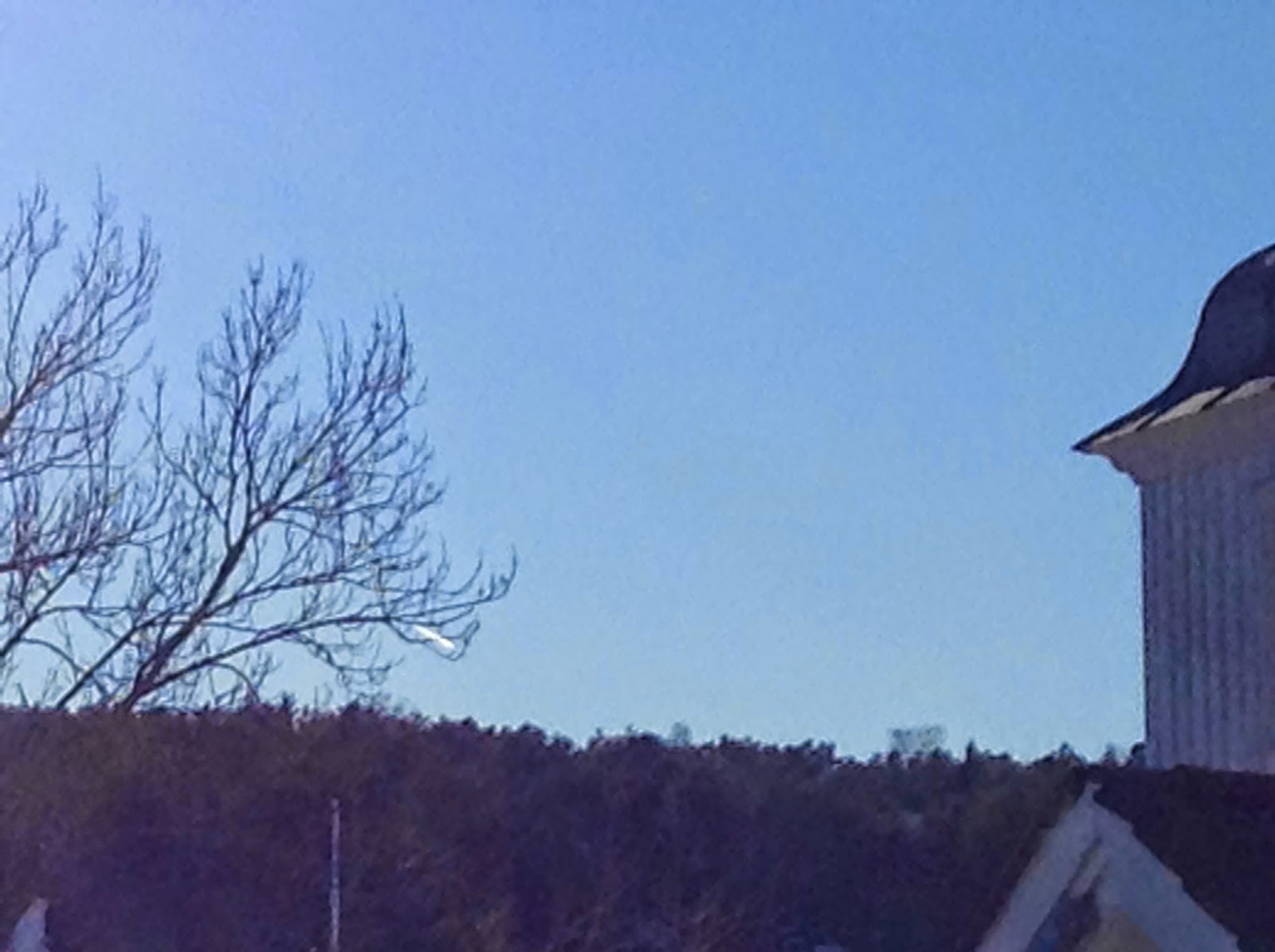 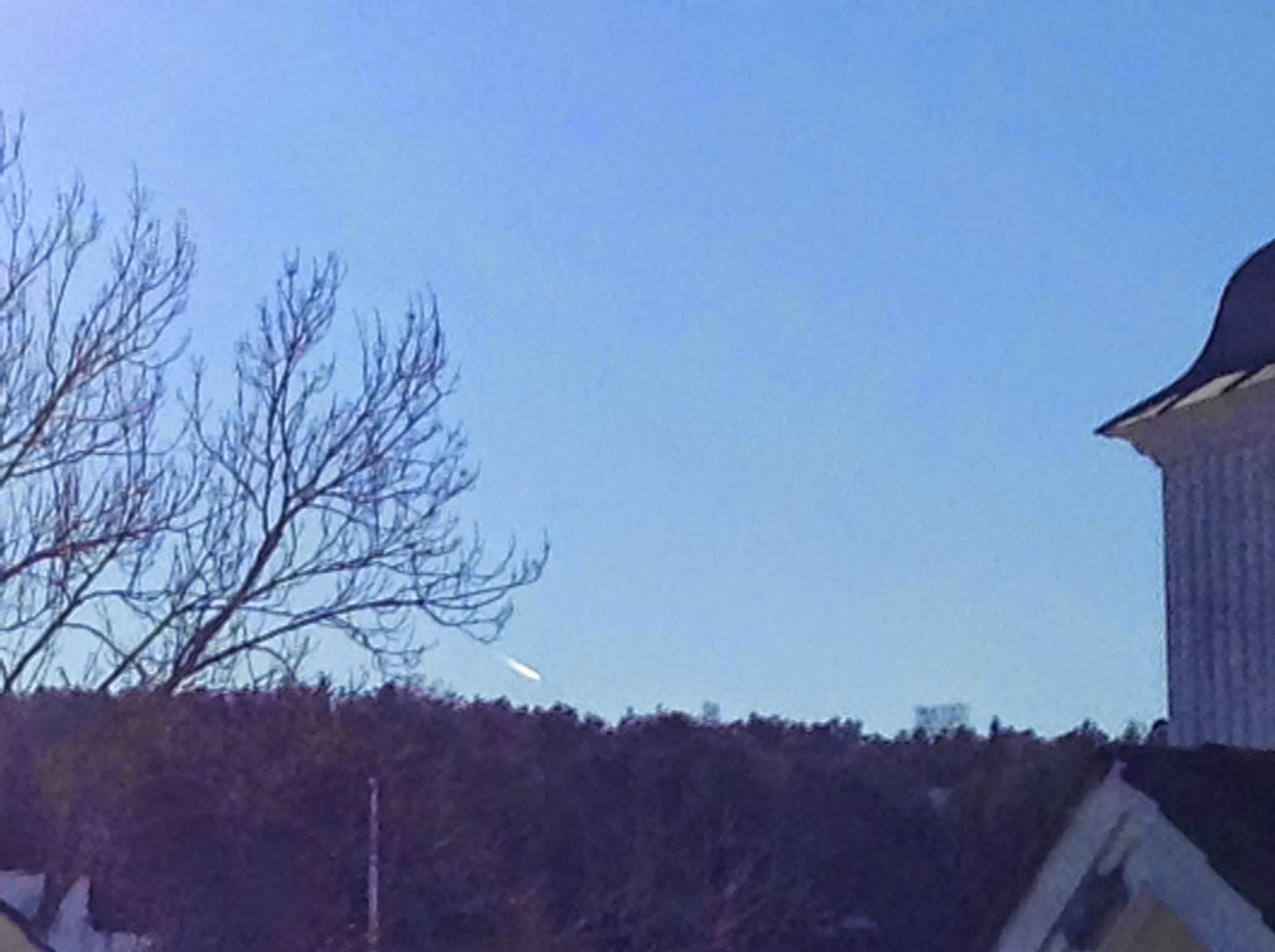 Photograph of a passing aeroplane for comparison: 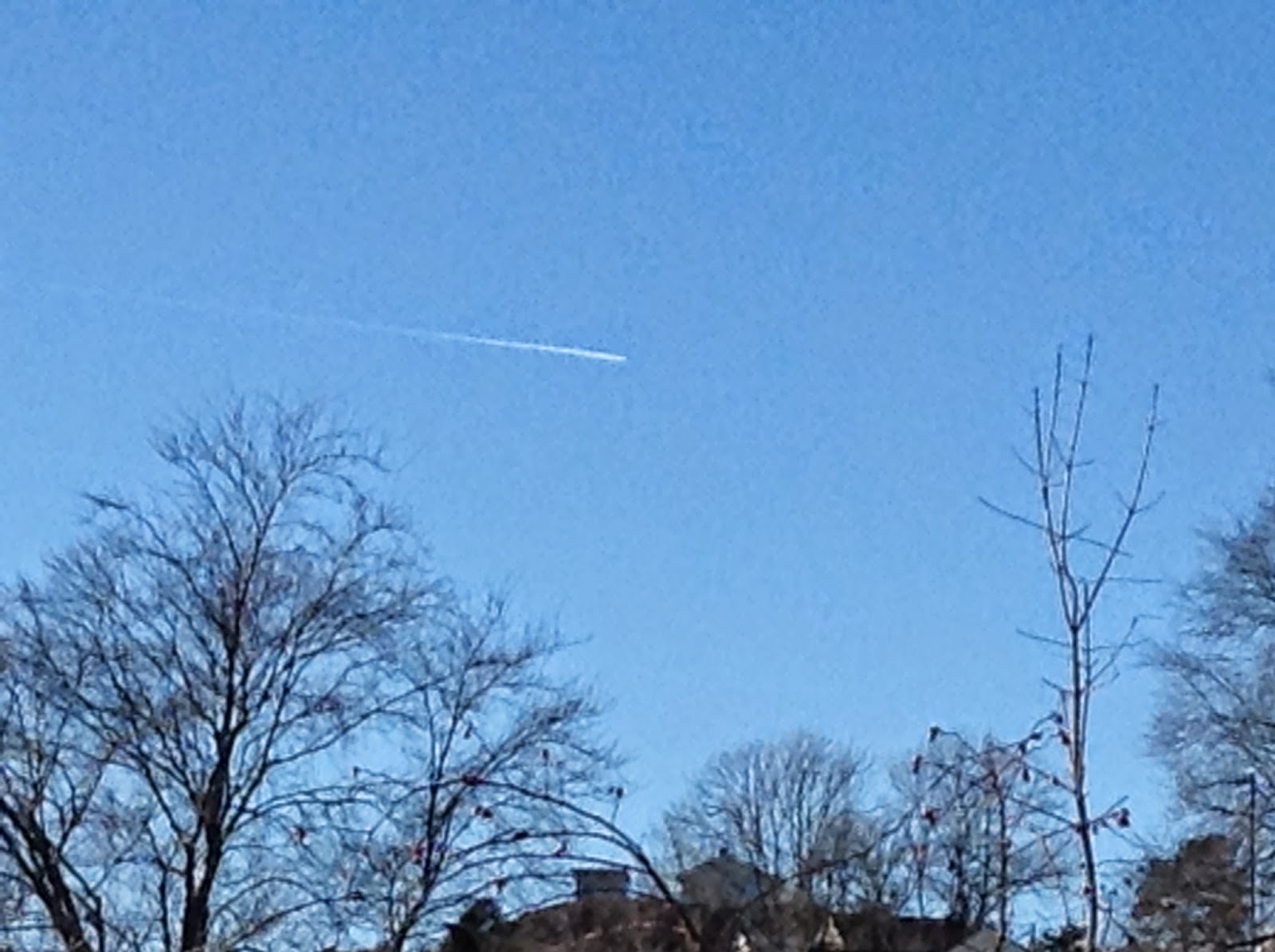 Zoomed view of the UFO. The object is behind the tree, the way in which it appears to be in front of some of the branches is down to colour bleed out: 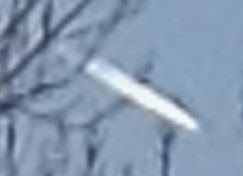 Zoomed view of the UFO with edge find:

The most logical mundane explanation is that the object was an aeroplane reflecting the sunlight making it appear brighter and larger than usual. That said, the photograph of the aeroplane Julia sent me for comparison was taken from the same location in the same lighting conditions, and the differences are very easy to see. Julia also says that she has often observed planes from the window and they have never appeared like the photographed object. Also the sound of their engines has been audible, whereas the UFO made no sound at all. That said, it may be that any noise was lost due to how far away the object was.

It is clear that the object was not any kind of blimp or balloon, and it was moving too slowly to be a daytime meteorite.

It is unlikely that the fact the witness initially felt she had been outside when she observed the object, and later realized she had actually been in her office, has anything to do with the UFO. This was probably just down to how excited the witness was at the time of the incident, what she was looking at became of paramount importance.