During the daytime of Friday 16th October 2009, my six year old step-daughter had a sighting of some unusual objects in the sky over her school in Solihull. In the evening she told me all about what she had seen.

She was out in the playground at lunch time at 1pm. It was quite a clear day, with patchy cloud and blue sky. She decided to start skipping. After a short while she stopped and happened to glance into the sky. She saw a white stationary light, and three red lights below in a line which were continuously rotating. Her attention was drawn to the lights for a short while. After about 10 seconds she then says she saw what she described as a “silver-coloured frisbee” emerge from the position of the lights. It moved around the sky above the playground on a circular path, and then apparently flew away over where the gate to the playground was. She was a bit scared that aliens were going to come and take her, so she started skipping again to take her mind off what she had just seen. When she looked back a short while later the lights were no longer visible. Soon afterwards she told her friend about what she had seen. In the evening she related the story to me, and soon afterwards drew the below picture, which shows the playground and herself, with the objects in the sky above: 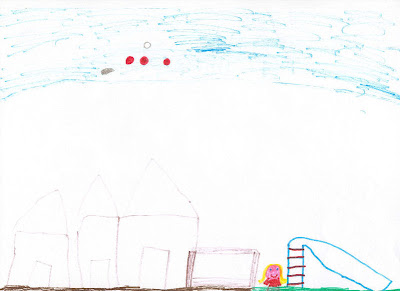 I have no doubt that my step-daughter saw something. She knows about the investigative work that I do but she was completely open about the sighting and I do not believe she was making it up. She answered many questions on it and a few days later when I asked her again, her story had not altered at all.

However it is of course possible that she mistook normal aircraft for something more unusual, she is after all only six. The lights she saw were white and red; these colours of course are the same colours as normal civilian aircraft lights. But it was the middle of the day, so surely if it was a plane she would have seen its shape as well as just the lights? She has been taught how to identify aircraft, even at night-time. Also the three red lights were rotating, which of course on a normal aircraft they would not do. There is also the silver disc-shaped object which she saw emerge from the lights and move independently of them around the sky. These aspects are very interesting and point towards the sighting being of something unusual, rather than simply mistaken identity. If it wasn’t aircraft, perhaps it could have been something else such as balloons or a model of some kind, or maybe a mix of a number of things. We will probably never know for sure either way, so for now it remains an interesting and unexplained sighting.