It was 9.40pm on the evening of 13th April 2010. On Creswell Road in Hall Green, Phil headed outside to lock the front gates of his house. It was a clear night with no wind, and the stars visible in the sky. Looking to the North East East in the direction of Birmingham airport, he saw two orange round balls of light. They appeared to be at high altitude and moving at over 100mph.

They were side by side and looked to be quite close to each other. As the objects got nearer, Phil decided to run into the house and get his wife Emily. They headed back outside to see what was happening. 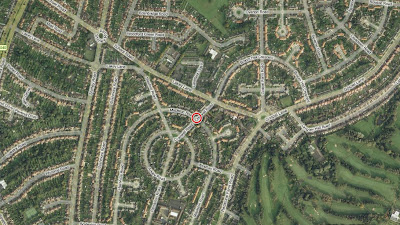 By now the objects were almost overhead. They looked to be quite large in size and were glowing a fiery orange. Emily estimates they were about the same size as a metro. The witnesses noted they were completely silent. The orbs passed overhead and continued on a straight course to the South West West. Emily was so amazed at what she was seeing, it brought a tear to her eye. Shortly aferwards, one of the orbs flashed a few times and then went out. They could still make out a rounded object against the night sky due to the proximity, which continued on the same path it had been taking. A few seconds the second orb which also vanished. The whole sighting lasted for a couple of minutes.

Often a sighting such as this would be put down to Chinese lanterns. Many of the aspects of the sighting at first appear to fit in with this expalanation - the colour and shape of the objects, the straight flight path and lack of obvious intelligent manouvres, the fact that they suddenly went out/vanished. The objects were clearly too slow to be meteorites, and are highly unlikely to have been earth lights, as these are not seen over urban areas and do not last for very long.

But Emily does not believe that they were lanterns. She informed me she has seen lanterns on numerous occassions before, but these objects were different in a number of ways. She says that the lanterns she has seen before looked like orange candle light with a bright centre and hazy outline, and also flickered. These objects were like huge bright balls of fire, almost like meteorites but with no trail behind them. They were constantly bright. She believes the objects were moving much too fast for lanterns. When Phil ran into the house to get her the orbs looked quite far away, but by the time theyd headed outside they were almost right overhead. Also their path looked very controlled, the lanterns she had seen previously had more random drift to them. These orbs maintained course and positioning to each other throughout the sighting.

On the other hand, perhaps these objects were a different kind of lantern to her previous sightings. At night time it is very hard to judge distance, and therefore size and speed, accurately as there is no point of reference. Could the objects have been much closer and much smaller than how they appeared to be? Even though it was still at ground level, perhaps they were caught in a strong air current which could have been responsible for the very straight flight path of the objects. Another possibility is that the two objects were linked in some way (for example by a string), and this link was unable to be seen against the night sky.

If there is a normal explanation for the objects, it is more than likely to be Chinese lanterns, but it is still interesting that Emily feels they were something else after seeing lanterns many times before.