At approximately 10.25pm on the evening of 12th November 2013 Benjamin was letting his pet dog out into the garden of his house in the North East of Banbury, Oxfordshire. It was a clea, cold and still night with the moon and stars visible. He noticed an object in the sky out of the corner of his eye. To the North East, at an angle of about 45-55 degrees, was an object which he initially assumed to be an aeroplane. However he soon realised that the object had no navigation lights visible on it. He looked harder at the object and was amazed by what he saw.

The main body of the object was a curved rectangular shape. But on one side of the object was what looked like a large shark fin shaped triangular protrusion which was sloped downward at an angle of about 45 degrees. Both the main body and the fin-shaped protrusion appeared to be metallic silver in colour. There was a bright orange coloured aura around the object. This glow appeared to be emanating from the entire object and did not change in brightness at any point. Benjamin ruled out reflection from street lights as it was glowing for the duration of the sighting, even when far away from any street lighting on the ground.

There was a short orange trail behind the object which was about twice the length of the object itself. This trail appeared to be light dispersion rather than actual vapour or material coming off the object.

Witness drawing of the UFO and location: 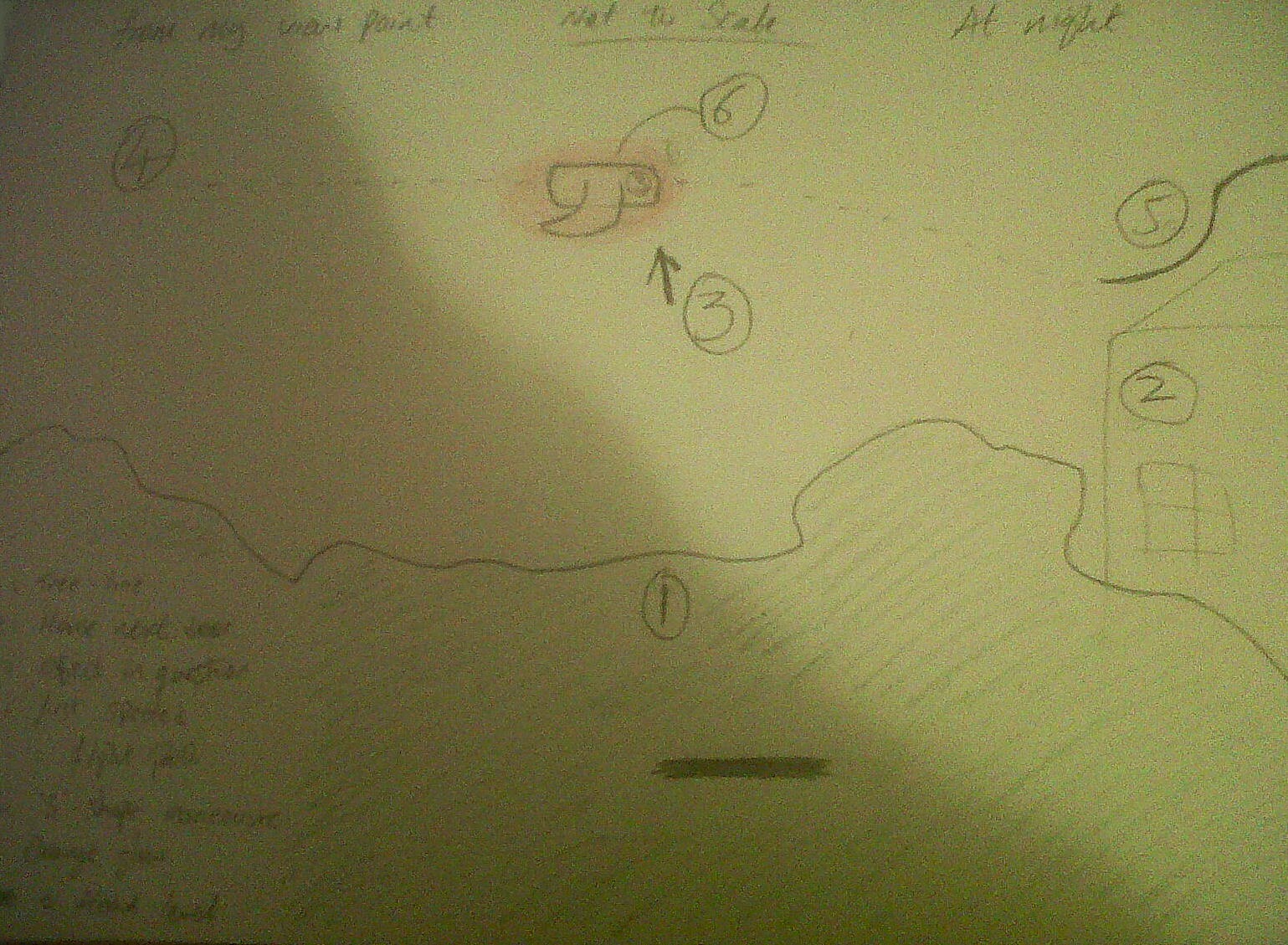 It appeared to be between 500-1000 yards from his location. If it was indeed this far away then Benjamin estimates it was quite large in size, perhaps 2-3 times as big as a commercial airline passenger plane. There was no sound coming from the UFO, and Bejamin believes that if it had been making a noise he would have been close enough to have heard it.

Aerial map of junction 11 of the M40, over which the UFOwas situated: 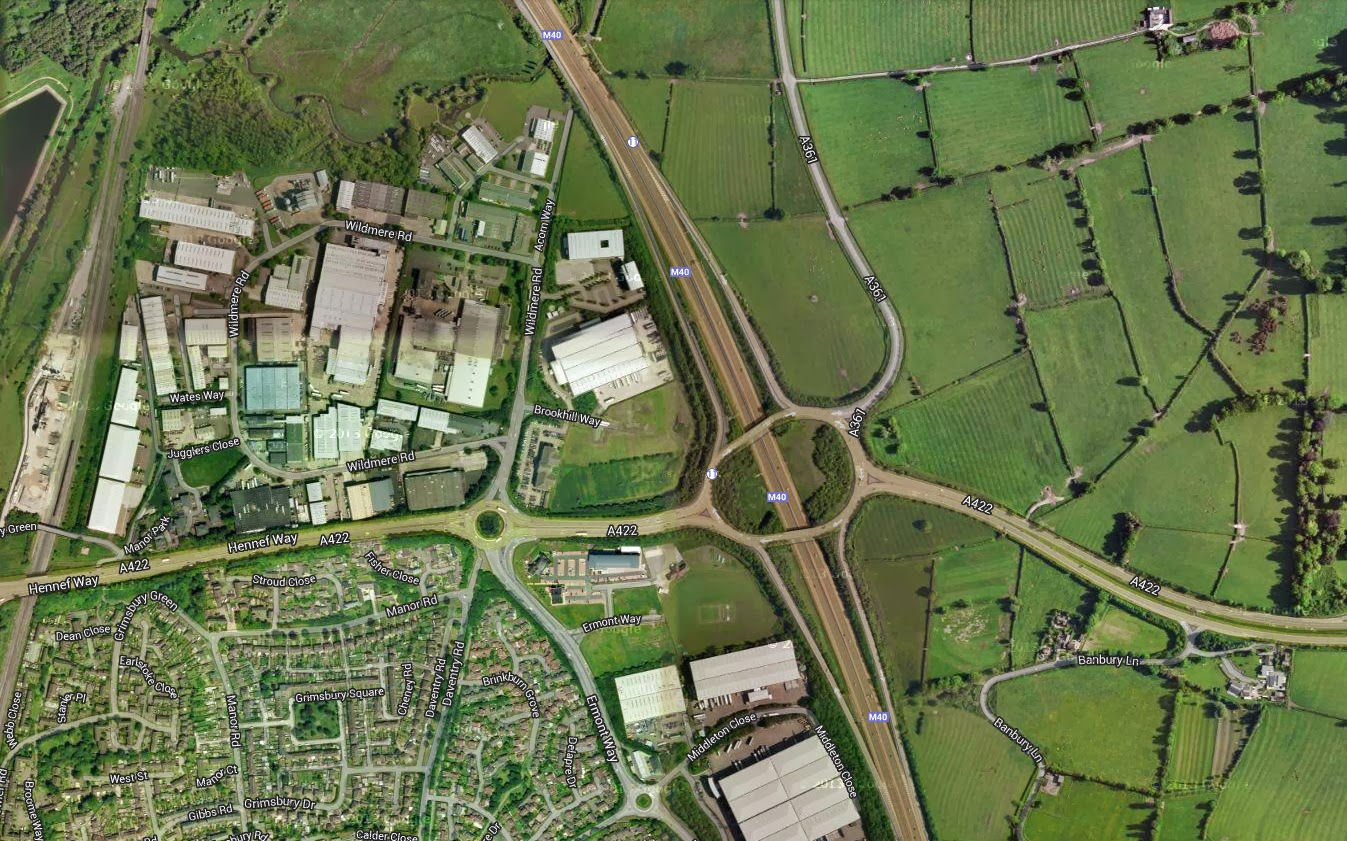 Benjamin watched the object travel on a straight path until it reached the boundary of the town. Then suddenly without warning it greatly increased in speed. It pitched up and to the left, then down to the right in an elongated S shape. After about 2 seconds he lost sight of it behind the house adjacent to the garden.

He was quite puzzled by what he had just witnessed and could not explain it logically. The appearance of the object, its sudden increase in speed and manoeuvres were very hard to explain.

This is a very interesting sighting indeed. The appearance of the object is certainly highly unusual, and I cannot think of any other case where something similar has been reported. It was clearly not a conventional aircraft of any kind. Neither its appearance or the unusual manoeuvres it performed would fit this explanation.

Could the object have been an odd-shaped Chinese lantern? Obviously lanterns are quite small in size, so if this was indeed what was seen then the object would have had to have been much closer to the witness than it appeared to be. As there is no point of reference in the sky this can sometimes happen. If it was indeed a lantern this would explain the orange glow around it. Perhaps it was travelling on a particular air current, and then suddenly got blown around by another gust of wind. This could possibly explain the sudden increase in speed and unusual curving manoeuvres which it performed before it vanished from sight.

However lanterns do not tend to leave a trail behind them at all. Also the shape is extremely unusual - Most lanterns are cylindrical or rounded in shape. Most aspects of the sighting do not fit in with a lantern explanation, and I feel it would be clutching at straws to say that it did. If it was not a lantern, then what else could it have been? A novelty shaped inflatable would not have had any glow coming from it. A hand glider or hot air balloon would have moved slower and would not have performed the highly unusual movement patterns observed at the end of the sighting.

After looking into the aspects of the case I cannot provide an answer for what was seen at present, meaning that this object remains unidentified. If you have any further information on this incident please get in touch.