This report covers a fascinating close encounter with a boomerang-shaped UFO which took place in Bedlington, Northumberland in May 2010, and may well have occurred directly as a result of something the witness was doing at the time.

In May 2010 Jane Davison from Bedlington, Northumberland bought an astronomy lazer pointer, a device which shines a bright green lazer light into the air allowing individual stars to be pointed out. She did this after watching some night-time clips on the internet where UFOs were apparently vectored in by one of these lazer pointers, and could be seen flashing in the night sky. She wanted to give it a go herself, and hoped to get some kind of response.

Early in the morning of 12th May, Jane was watching some TV after a late shift at work at her home on Windsor Gardens. Her family were asleep upstairs. It was the first clear night since she had bought the lazer pointer, so she then decided to head out into her back garden to try it out for the first time. It was now about 1.20am. 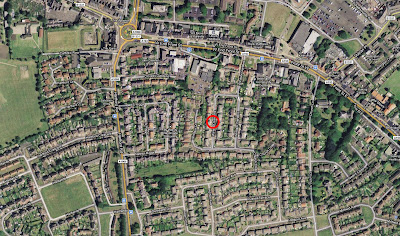 It was very peaceful outside and there were no aircraft in the sky, so it was safe to use the pointer. She aimed it up into the sky and shone it a couple of times. Suddenly she heard a very quiet and low pitch noise in her right ear. It sounded similar to someone swinging a cord around in circles. She turned towards the sound, expecting a flock of birds to be the cause of the strange sound. Instead she was greeted by an incredible sight.

There hovering over her neighbours garden was a black boomerang-shaped object. It was about 50 feet in width, and had five equally spaced green glowing lights on its underside, which were not very bright. Its surface was smooth, and it had curved edges with no sharp corners. It was level with the roof of the house, and was only about 30-40 feet away from her position. It appeared to be sideways on to her. Jane immediately assumed this object was an advanced craft of some kind. She also felt sure it had arrived in response to her shining the lazer pointer.

Photograph of the sighting location with UFO drawn on top by the witness to illustrate how it appeared to her: 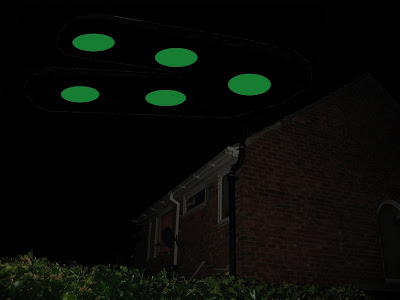 Jane froze to the spot in fear, she was absolutely terrified by the sudden appearance of this unusual craft and its proximity to her. Even though she had a camera in the house, she did not think about this at all, her prime concern was for the safety of her family. The craft remained completely motionless, and continued to make the strange whirring noise. After about 5-8 seconds, it turned through 45 degrees away from her to the South over 4 seconds. It did this without changing position or tilting at all. At this point Jane forced herself to move and quickly ran back inside the house. She remained inside and did not go back out, so has no way of knowing how long the craft remained in the area or how it left.

Jane immediately woke her husband up, hysterically telling him about what she had just witnessed. He refused to get up out of bed, and there was no way Jane could get to sleep after what she had seen. She instead decided to phone her work place. She knew her work mate Nick was on the night shift. He picked up the phone and she excitedly went on to explain what had happened. She said to him “Nick you have to be my witness. If I go missing, at least someone knows what’s happened to me!” She was terrified that the craft may still be outside and may decide to take her. Jane’s husband heard the noise of the call and came downstairs to see who she was talking to.

Jane remained awake for the rest of the night. At 3am she rang Nick back to thank him and let him know she was ok. She was too frightened to look back out of the window until the sun came up. Later in the morning she spoke to her neighbours. They said they had not heard or seen anything.

The craft had been extremely close, and looking back on the incident, Jane wishes she had reacted more calmly and taken some photographs of it. The sighting has changed her life in numerous ways, and Jane now has a new found perspective on the reality of UFOs and extraterrestrials.

This is a truly incredible incident, and one which I believe definitely took place. The witness sounds completely trustworthy and has nothing to gain by sharing her experience with me. Firstly it seems very likely that this was a genuine sighting of an ET craft. Its appearance was completely different to any known conventional aircraft, and it was capable of remaining stationary and turning on the spot. It also managed to arrive without the witness noticing, and emitted only a faint sound, one that has been reported numerous times before. It is very unlikely to have been some kind of inflatable object, not only due to the green lights along it but also the circumstances under which it appeared. It seems too large to have been a remote controlled model, also for what purpose would it have been flown in the middle of the night when it was unlikely anyone would even see it? Could the craft have been a secret military project, not alien? This is of course a possibility, but if it was it is very unlikely they would have flown it over a populated town. I feel therefore that it is likely the craft was extraterrestrial in origin.

The description of the craft sounds very similar to the object which was seen over Phoenix, Arizona on 13th March 1997. The craft in the Phoenix Lights incident was much larger, and it had white lights instead of green, but the shape and lighting configuration were similar. Below is a drawing of the craft seen over Phoenix by one of the witnesses, the similarities are easy to see: 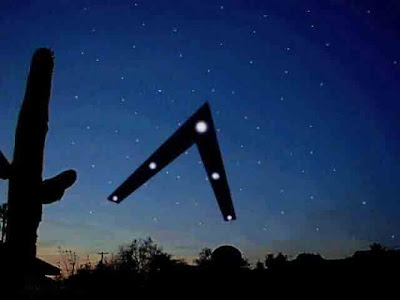 It seems very probable that this craft did arrive directly as a result of Jane using the lazer pointer. Obviously this usually does not happen when these devices are used, otherwise it would be easy to get conclusive proof that UFOs exist. It is possible that this happened by pure chance, perhaps the craft was in the vicinity, the lazer light was noticed and it flew in for a closer look. Or perhaps it was there to observe Jane or her neighbours, and it was just a coincidence that the lazer pointer was being used at the time. The green lights seen under the craft are interesting. This is just a suggestion but could these lights have been changed to this colour in direct response to the green lazer light that Jane was shining into the air?

Whatever the reason for the craft’s appearance that night, this remains an impressive close encounter. Due to the time of night that it took place, there would not have been many people out on the streets, but it is still possible that other witnesses exist. If you too saw this craft over Bedlington please get in touch.