A mysterious “flying Dorito-shaped” object which was seen by dozens of people just before Christmas has been spotted again – this time in the skies above Lower Gornal.

The strange unexplained flying object was seen by residents in Wallows Wood, off The Straits, at around 6.15pm on Tuesday. Householders described the object as looking like an “arrowhead” with three orange lights arranged in the shape of an isosceles triangle. 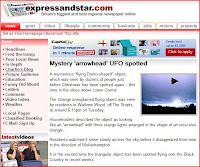 Residents watched it move slowly across the sky before it disappeared from view in the direction of Wolverhampton. It is the second time the triangular object has been spotted flying over the Black Country in recent weeks.

Scores of people contacted the Express & Star after seeing a UFO in the skies above Wednesfield and Dudley in December and Stourbridge-based UFO Research Midlands was deluged with calls and emails from onlookers who witnessed the object. Lower Gornal resident Peter Wasdell, aged 57, said he could not believe his eyes when he saw the object.

"The dog started barking and when my wife went outside to find out what was going on she saw the object in the sky and called me out to have a look," he said. "There were three orangey lights in a triangle formation. They weren’t shaped like an equilateral triangle, more like an isosceles triangle, and shaped like an old fashioned arrow head. I don’t think it was a plane because we didn’t hear any noise. "My daughter and her boyfriend and the next door neighbours all saw them and we watched them for about 15 minutes before they disappeared behind the trees."

Paranormal enthusiast Craig Lowe, who is a member of the Birmingham UFO group, said the area was a “hotspot” for unexplained activity. Mr Lowe, who captured December’s sighting on videotape, said he believed the object could be some sort of military aircraft. 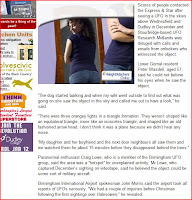 Birmingham International Airport spokesman John Morris said the airport took all reports of UFOs seriously. “We had a couple of inquiries before Christmas following the first sightings over Halesowen,” he revealed.

If there are any witnesses to this event or anybody who has any information please contact BUFOG.